Article: “Get app and go” – How I developed my iPhone app! 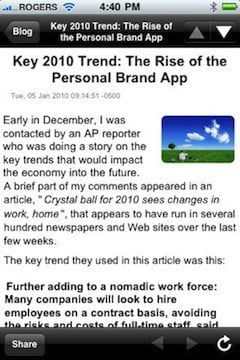 Last fall, Microsoft invited me to speak at a series of events related to its Windows 7 launch; I’d be addressing C-level executives on the key business strategies organizations are adopting as we come out of the recession.

For the first stop on the tour, Microsoft CEO Steve Ballmer spoke to the audience, so I went to hear what he had to say. He certainly stoked enthusiasm for the new Windows 7 product in the manner for which he is known, but he also spoke to the broader plans for Microsoft in the future. One comment about mobile devices stood out: that the reason why Apple is selling so many apps for the iPhone is because generally the browser on the phone isn’t very user friendly.

That’s quite true. I find when I access the Internet on my iPhone the screen resolution seems particularly challenging for these middle-aged eyes. My own website features fonts and a layout that look great on a big monitor but when accessed on an iPhone don’t work very well.

So I decided I should have my own app that features a variety of information found on my regular site. Hence, my voyage into the world of iPhone app development. Apparently it’s a voyage many people are pursuing, with some 80,000 apps already available on the iTunes store.

As I began looking around, I found quite a few artists and entertainers (which I think my career is increasingly evolving into) were releasing iPhone apps. Heck, I even found an app for Pat Boone. That blew my mind.

It was a timely decision: I had already started down the path toward promoting compatibility with the new world of wireless devices by creating a special version of my website uniquely formatted for small screens. I did this in a matter of hours by setting up a Wordpress blog; I added to it the iPhone/PDA “theme” that reformats pages to fit within the narrow screen size found on a BlackBerry or iPhone. I then added code to my website that figures out if someone is coming in via such a device: when someone does, it redirects him or her to the mobile version.

It was a bit challenging to get the blog section of my website into the iPhone version – until I found Mippin, that is. This nifty free service automatically formats a blog feed for wireless devices in a matter of seconds. If you have a blog and a PDA, try it out; it is quite a magical service.

Voila. I now had a version of my website that worked well for PDAs. But I thought I still should have an app that is available to people in the iTunes App store. Where to start? A friend put me in touch with iEveryware, an app developer based in California. From there, a phone call led to a cost estimate and within hours, I was on the way to having my own app. It was that fast. Until then, I had thought the process of app development would be some deep secret known to a chosen few. The reality is that there are already thousands of developers out there.

One key step in the process was setting myself up as an Apple iPhone Developer, for a fee of US$99. Once that was done, I was able to register the name Futurist for my app. I registered a few other app names for future use; right now, it seems a little bit like the early days of domain name registration. (Hint, hint.)

As I write this column, I’m actively involved in testing daily updates from the development team as they put together the application; it features a variety of videos within the app itself; access to video feeds from YouTube; direct access to my blog and Twitter feeds and some information resources about innovation and trends. We’re hoping to submit it to Apple shortly; by the time you read this, it should be out there. The cost to develop my app? Just US$995.

All this from hearing Ballmer suggest the experience of browsing the web on an iPhone sucked.

(This article was written in December 2009. The app was submitted December 21, and was approved for release 10 days later!)