Keynote: Toronto to Sydney, live and interactive via fiber optic 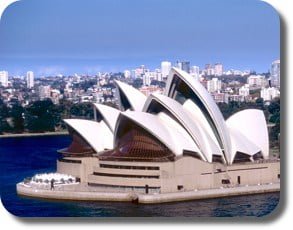 Earlier this week, I spoke to a group of executives for a financial institution in Sydney, Australia, live via a fibre optic link — a distance of almost 10,000 miles (or 15,000 kilometres)

The client had wanted to bring me directly to Sydney, but the timing conflicted with a number of other events. Hence, the alternative method of “getting me there.”

Utilizing the services of Toronto based TV2GO, we had a direct fiber optic video and audio link into the conference at the Hotel Intercontinental in downtown Sydney. In addition, I had a live feed of the audience; not only that, but a number of “runners” had microphones available which provided for a direct, instant 2-way Q&A session at the end of my talk. In addition, I had a full Powerpoint deck running on separate screens in Sydney, transitioning to my cue from Toronto.

I’ve worked with TV2Go before, including on a live feed into CNBC for the Business of Innovation show.

If you are looking to me into your next event, you might consider this type of fiber optic or satellite link. With TV2Go, I can get myself via satellite and fiber connectivity to major conference centers or hotels in North America and South America, Europe, the Middle East, and Asia, if they are properly equipped. In the case of Sydney, the financial institution set out to find the facility with the greatest technical experience with this type of thing: hence, the Hotel Intercontinental.

What we need at your end is a facility that is capable of receiving a fibre optic feed via one of their global partners; or that can ‘see’ one of the dozens of satellites to which they can uplink. These include Telesat, Intelsat, PanAmSat, SES Americom, New Skies, Hispasat, LORAL and Eutelsat satellites.

The key to making this work is having a fibre/satellite friendly AV team at the other end. In the case of my Sydney, Australia event, Stuart Haynes was a real pro. He’s with the Intercontinental Sydney, and has managed dozens of such events through the years. On short notice, he pulled together an AV team that managed the feed, provided for several cameras in the room to feed back to Toronto, and an AV team that transitioned through my slide deck on cue.

Overall, a tremendous experience, and one that you might consider for your next corporate event.