Offshoring — if anyone was listening…. 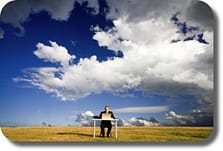 I find it kind of fascinating that people seem surprised about the offshoring of many jobs to India and elsewhere. Back in 1996 or 1997, I released a list of 10 important trends to watch for — among them, the fact that the location of work would increasingly become irrelevant over time. It’s kind of fascinating to read the list today, considering what is going on out there.

It’s not like the signs of a looming offshoring trend weren’t evident or anything!