30 years of studying and working with global innovation leaders – and those who have failed – teach me the key lesson of transformative innovation: those who succeed are not afraid to step up and look out over the leading edge.

They’re prepared to align to new technologies and methodologies, explore new concepts and try them out, and keep an eye and ear well-tuned to what comes next. That’s why trend #19 of my ‘23 Trends for 2023‘ is Leading at the Leading Edge. 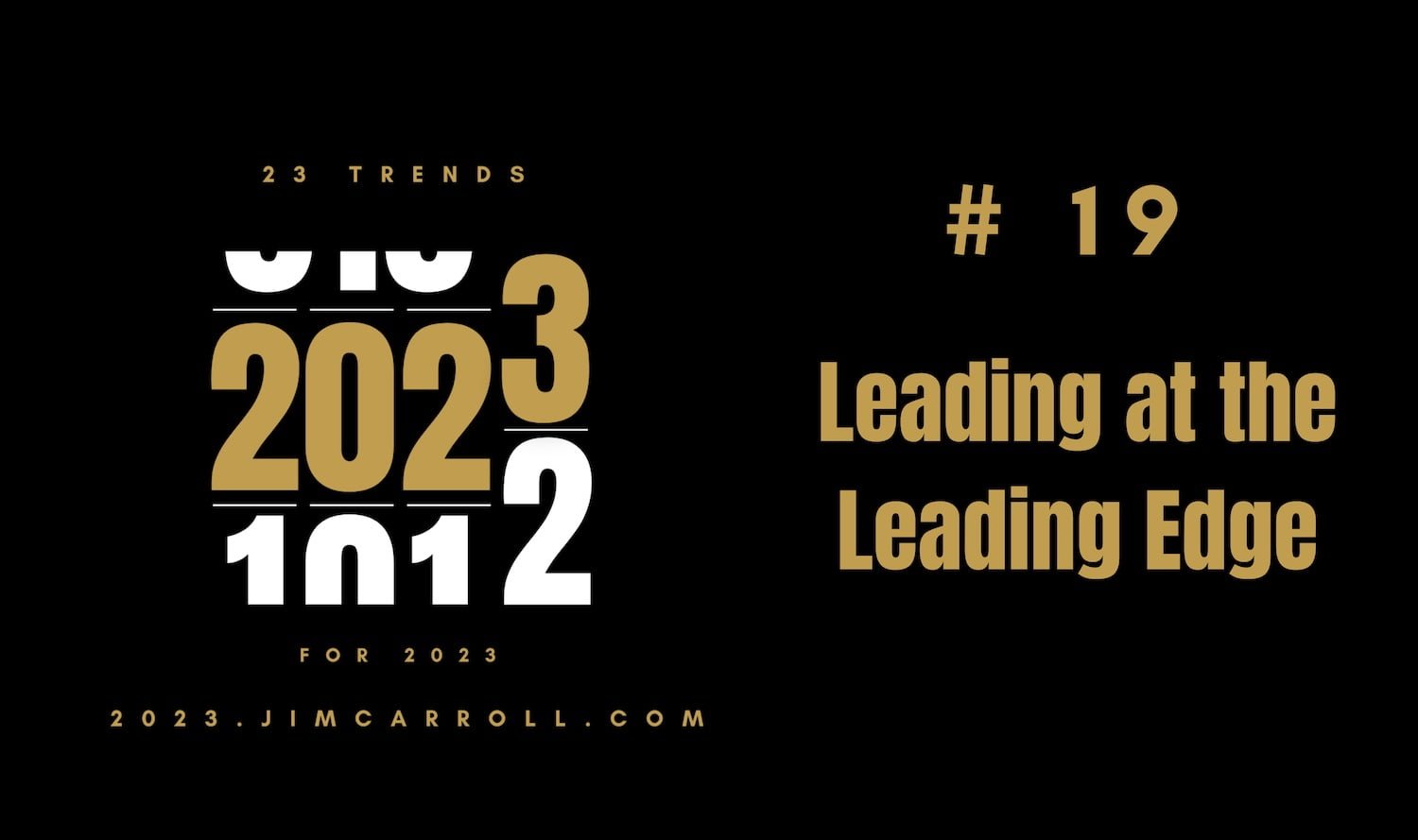 I’ve seen what these leaders have managed to accomplish by aggressively aligning to the future.

Consider the world of construction.

The numerous association events and CEO-led sessions I’ve led have shown me that those who excel in the industry are those who rapidly ingest all the new ideas that are out there. This includes the rapid emergence of new materials,  new construction methodologies including advanced robotics;  augmented reality technology for schematics, plans, and blueprints; intelligent, connected building technology; advanced renewables technologies and micro-grids; advanced concepts such as 3d printing in concrete or other substances; the idea of connected construction;  advanced modular offsite prefabrication methodologies;  drones and other management inspection/insight tools;  digital twin technologies for whole building analysis and management;  eco-building tech such as solar windows.

There’s no shortage of opportunities for innovation, and the winners are those who have been implementing these opportunities at speed out at the leading edge.

It’s a fascinating industry, and I’ve seen farmers and producers aggressively align to scientific acceleration; implement new methodologies such as robotics; acceleration of precision farming insight via drones and spatial farming concepts; hyperconnectivity such as Fitbit for cows; chase generational change knowing that the next generation is far more open to new ideas; collaborative innovation models and the pursuit of big, bold ideas. There are a lot of innovation-aggressive farmers out there, in an industry with a lot of fast-moving ideas!

And then there is manufacturing.

It’s a world of 3d printing and additive manufacturing; new manufacturing methodologies including advanced robotics and cobots; building smart factories with Industrial Internet of Things sensor technology, rapid prototyping, and iterative design concepts; exploring the crowdfunding and crowdsourcing of design; pursuing the acceleration of skills; implementation of new material science; embedding intelligence and connectivity into products; and aligning to Amazon’s disruption, to name but a few.

These are just a few industries.

Everywhere I look, I’ve seen industry laggards come and go because they have failed to pursue new ideas, and I’ve seen the winners emerge because they’ve been prepared to aggressively pursue what’s next.

This becomes particularly important during times of economic volatility and indecision. Some years ago, I was interviewed sometime by a publication in the food industry – this was related to a keynote I did in New York City for the Readers Digest food summit conference. They ran a short article, “March of the New Machines: The Future of Food Processing” — and ran my comment on what I’ve seen in terms of CEOs who have a relentless focus on growth and innovation.

Some good food for thought on the need to be RELENTLESS on the future and opportunities, and staying out at the leading edge.

In a tough economy like this, it’s time to hold the line on spending and to be especially cautious of leading-edge technology. Right?

History’s full of companies that leapt ahead of competitors by increasing spending, especially on innovation, during down times. Jim Carroll, author and innovation consultant, recalled a speaking engagement in which he followed the CEO of a global restaurant chain, who spoke for a brief but powerful 20 minutes.

“For the first minute, he spoke about the global economy and the meltdown. He then spent the next 19 minutes identifying eight growth opportunities and how this organization could do great things if they relentlessly obsessed over them.

“How cool is that?” asks Carroll. “All these other companies are retrenching, pulling back, and here’s a guy who’s saying to his team, ‘Let’s focus on growth.’ “

He says growth plans and strategic if judicious spending is mandatory for managing during a downturn. Companies that aren’t paralyzed by total spending freezes can get the jump on those competitors who are. And when the economy is back on track a year or whatever from now, Carroll says only then will we be able to point to companies and say which ones lagged and failed and which ones “took risks and did great things.“

The article took a look at the technologies, production platforms, processes, ideas, and methodologies which can provide for innovation in terms of market growth, product development, cost management, and other areas. There’s no shortage of opportunity for innovation in the food and consumer product sector – or any other industry. In other words, opportunities at the leading edge.

Innovators focus on the future, they focus on growth, and they focus their team on opportunity – because they are led by successful leaders who choose to lead at the leading edge! 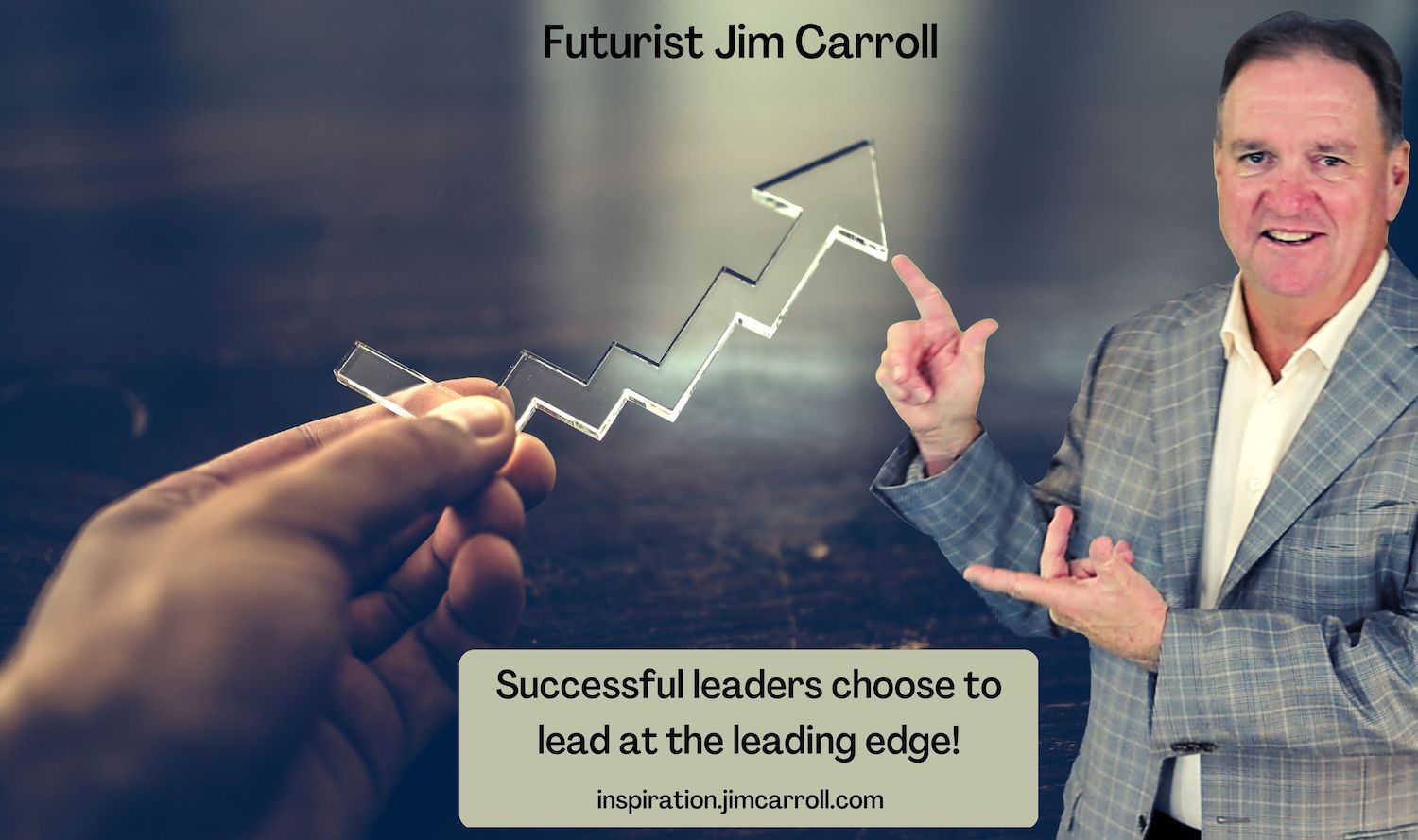 That’s a key message, and you’d do well to obsess over it – and get yourself to the edge!