We live in perilous, scary times – there are people around you who actually believe the wild conspiracies found in this image below. (And actually, if you go down the rabbit hole of the creator, you will find a store where you can buy a poster of it – and some equally crazy stuff.) 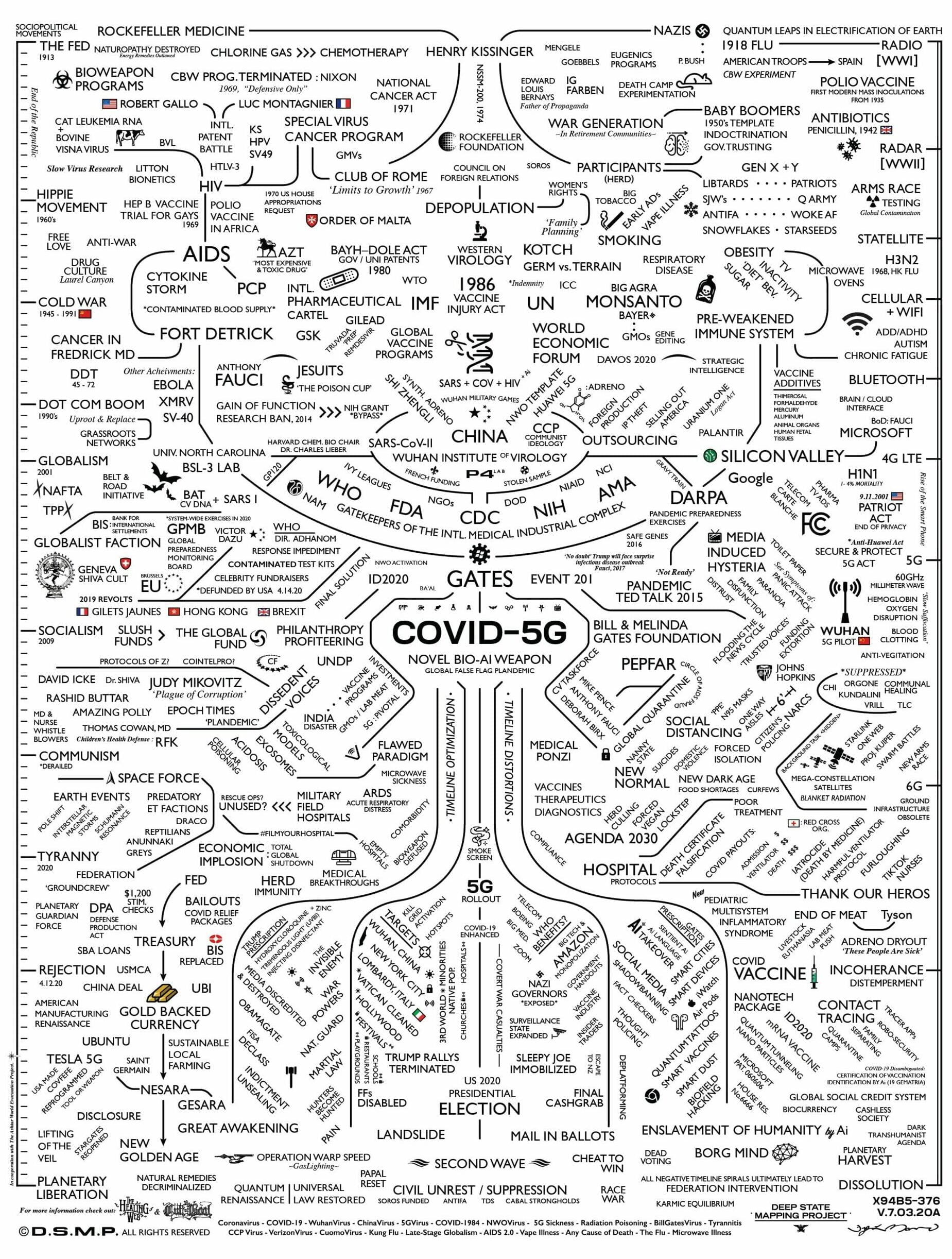 The thing is, there’s an economic cost, not to mention big societal implications and business challenges, from collective lunacy. 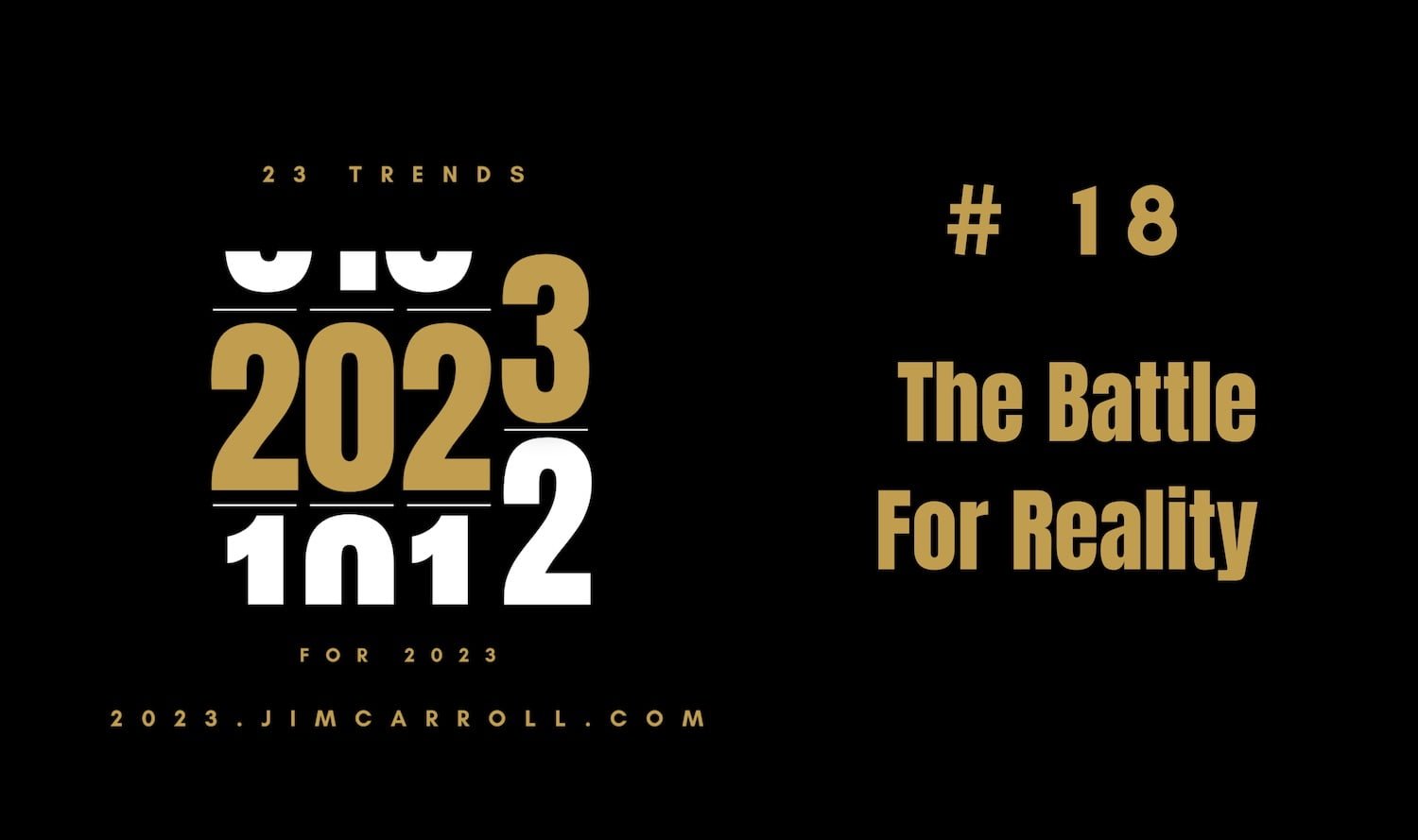 Whether they like it or not, leadership teams and organizations are going to have to deal with this collective insanity going forward.

They are finding it embedded in their workforce; are challenged by customers who disbelieve reality and have to regularly reconsider their advertising and public relations strategies in light of it. It was made clear in 2022 with the purchase of Twitter by a previously sane CEO, that we live in perilous times; social networks have now become massive weapons of societal stability if they were not already teetering perilously along that path. There seems to be a vain hope that somehow social media companies will ‘fix things;’ that is almost certain not to happen.

What is denialism? It’s defined in this research paper, Denialism: what is it and how should scientists respond? from the European Journal of Public Health, released in 2009!

Denialism: the employment of rhetorical arguments to give the appearance of legitimate debate where there is none,5 an approach that has the ultimate goal of rejecting a proposition on which a scientific consensus exists.

The document is a great read, and I’ve placed the PDF here. If you want to understand the history of denialism, it is a sobering read.

The Impact on Corporate Agendas

What does this lead to? Challenges like this – only 57% of American citizens believe that climate change is caused by human activity, whereas 97% of climate scientists believe this. The impact is that any organization pursuing a climate agenda as a result of its ESG strategy and beliefs has to battle an uphill effort. It leads to a situation in which companies investing in large-scale wind and solar energy projects have to battle a mindset that such power sources are unreliable because some ‘expert’ told them so. They failed to understand the reality that sophisticated low-cost and technologically advanced battery storage technology provides a powerful way to manage the overall architecture of the plan. The result? The company has to fight a ridiculous and high-cost battle to put reality into perspective – that’s the battle for reality.

This type of thing is happening across a broad range of industries.  By and large, most organizations have tried to ignore this challenge – but the acceleration of the trend makes it increasingly difficult to do so. That’s why it will be a critical trend into 2023.

It’s made worse by the fact that

Consider this chart, which went viral on TikTok some time ago, putting into perspective the varying degrees of societal delusion. 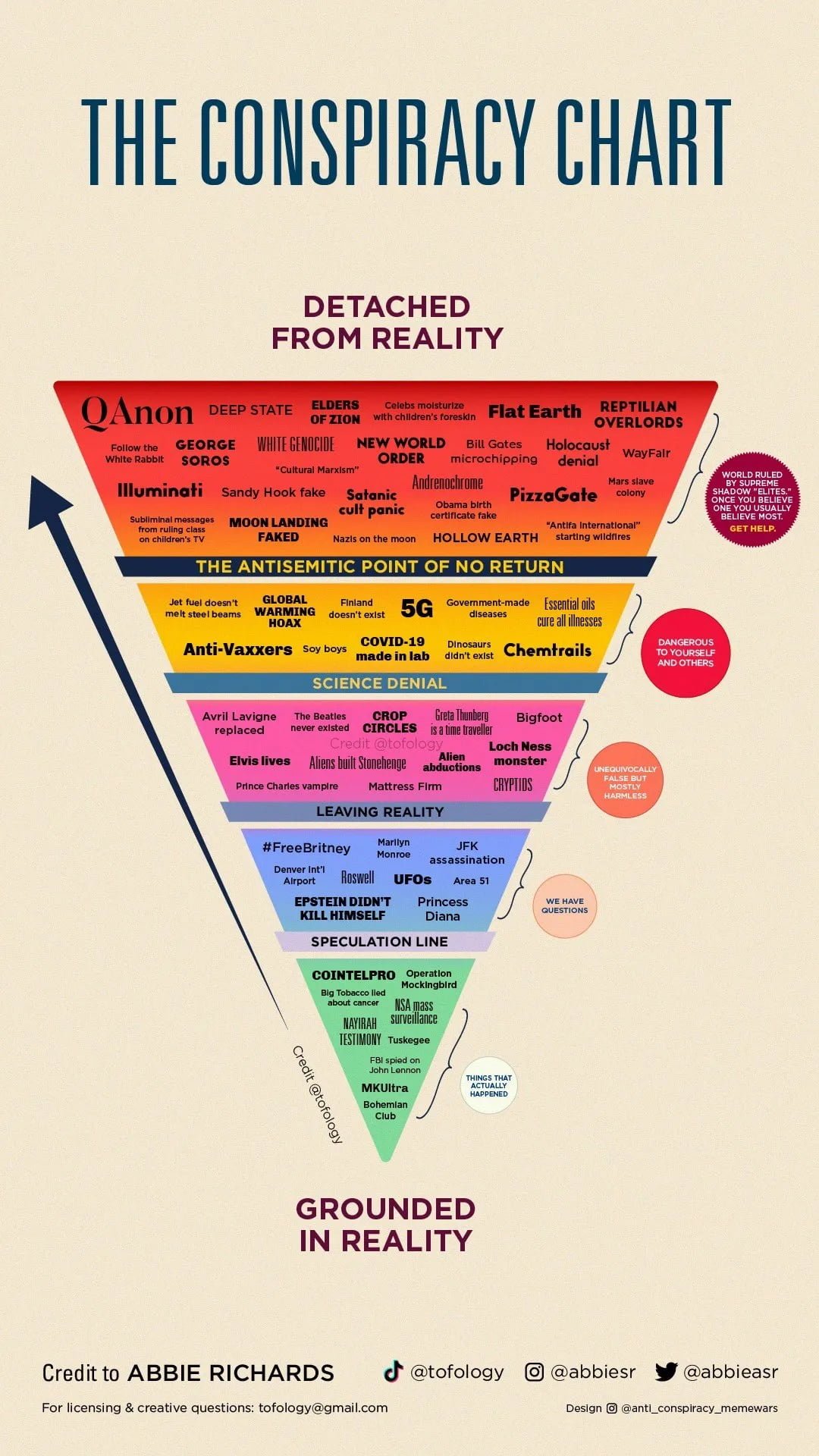 Now take a look around you, and ask – how many friends, family members and co-workers have you lost to this madness? I’ve had it happen – a long-time friend of mine has gone over the edge, as have others I know. Every once in a while, I dare to peek at his social media feed, and I am saddened that his bubbling anger over the challenges during the pandemic has meant that he is now actively embracing the wildest of conspiracy theories. And if you think about it, this is happening everywhere. We can’t deny what it might mean.

I believe that going forward, business organizations and leadership teams – who have tried to ignore the collective lunacy and have attempted to stay above the political minefield that it is – will have to become more actively involved, and that’s why this slides into my 23 Trends for 2023.

You can’t support an initiative towards clean energy and the acceleration of renewables and fight insane pushback from people who think that wind turbines are factories of radio waves that are controlling their intestines. You can’t pursue an agenda that involves rooftop solar if there are people who think that it’s a secret pathway to an alternative universe that must be destroyed. You can’t manage your workforce’s healthcare costs if a majority of your employees are actively working hard to kill themselves and their families because they believe that the planet Pluto is sending them secret signals that they need to remove all the asphalt in their neighborhood, and that therefore their children should not take a Polio vaccine.

Seriously, lunacy bears a price, and there’s a lot more of it about.

The Business Implications of Denialism

Years before Covid, I wrote a blog post, “The Emerging Healthcare Reality Crisis.” I predicted that an increasing number of people were turning their backs on established healthcare dogma, preferring to believe that a steady diet of obesity, high blood pressure, diabetes, and lifestyle would never have a negative impact on them. (Hint: um, it will!)

And so here we find ourselves today in which the situation has only become worse.

Read the post – look at the maps. And with that in mind, here’s a pop quiz – what does the economic future look like for regions like Alabama, Mississippi, Missouri, and Arkansas? What’s the job outlook for someone who has posted on social media that they believe that Covid vaccines were manufactured from werewolf venom? What company is going to locate a new factory in a region where the majority of people believe that space aliens are sending lasers raining down upon our planet – and what are the odds they are going to invest in some hi-tech skills training in such regions?

For quite some time, I’ve been taking on the trend of what happens to those regions.  What happens when a region turns its back on the future? Economic decline happens slowly and then, all at once. We aren’t seeing any real negativity yet, because we are in the halcyon days of anti-science political populism. Hey Florida! Fun times! Long term? LOL!

With that in mind, here’s what I think will happen, and what will become more apparent in 2023, just from a healthcare perspective.

It’s pretty clear that the trend we will see in the future is that future denialism carries a price.

Are leadership teams starting to notice the risk? Definitely! I spoke about this issue in this recent manufacturing podcast – and it was interesting, that this particular issue REALLY drew the attention of the two fellows interviewing me, senior executives in the manufacturing space.

Read this article from an Irish publication, and ask yourself – where does denialism take us?

Usually the arrival of a heatwave in Ireland is seen as good news. We change our greetings to one another and ask “Are you enjoying the great weather?”, and the newspapers have front-page pictures of children enjoying ice creams and swimming at the beach.

This year feels a bit different. The heatwave is also an ominous sign of climate breakdown. We hear about wildfires out of control across Europe, widespread droughts, collapsing agricultural yields, rivers drying up and biodiversity loss. Worse still, scientists report that these extreme events will only get worse as the planet heats. Once-in-a-lifetime heatwaves could become yearly events – one can only imagine the catastrophic impacts.

This year weather reporters and meteorologists have started to more clearly explain this bad news that comes with the warm weather, but it has not always been welcome. Indeed the accurate reporting of how climate change caused the heatwaves has received a media backlash. Many tabloids across the UK and Ireland have had strong opinion pieces calling for meteorologists to quit this “doom-mongering”, to get back in their box and to just report the “good” weather. More surprising has been how many usually scientifically informed journalists have joined this clarion call for scientists to shut up about climate change and just let people enjoy the good weather.

From a psychological perspective these reactions are understandable. So serious and scary is the reality of climate change that our impulse can be to deny it. It is too painful to consider how our comfortable lifestyles are causing climate change and so we try to psychologically avoid this. So strong can our impulse to deny uncomfortable truths that we will angrily attack anyone who speaks it and cling to implausible alternatives. Denial explains a lot about the growth in anti-science opinion worldwide.

However, denial is ultimately a poor coping mechanism. It causes scapegoating and conflict and delays people taking appropriate action. The alternative is to face the reality of our predicament, and to bravely experience our feelings of fear, guilt and grief. This can be an uncomfortable, upsetting process.

Many scientists who are fully aware of the catastrophic implications of climate change, talk in private of the toll this takes on their mental health. One ecologist I worked with talks of her constant grief as she witnesses the collapse of the natural world all around her. Many climate campaigners experience eco-anxiety and burnout.

Please don’t shoot the messenger over heatwaves and climate change; Denial of serious and scary reality is understandable but it is ultimately an unhelpful coping mechanism
30 August 2022, The Irish Times

Like it or not, this is a real trend, and is going to become more significant in 2023.