Daily Inspiration: “When they tell you your idea is too crazy … double down on your crazy!” – Futurist Jim Carroll

“When they tell you your idea is too crazy … double down on your crazy!” – Futurist Jim Carroll 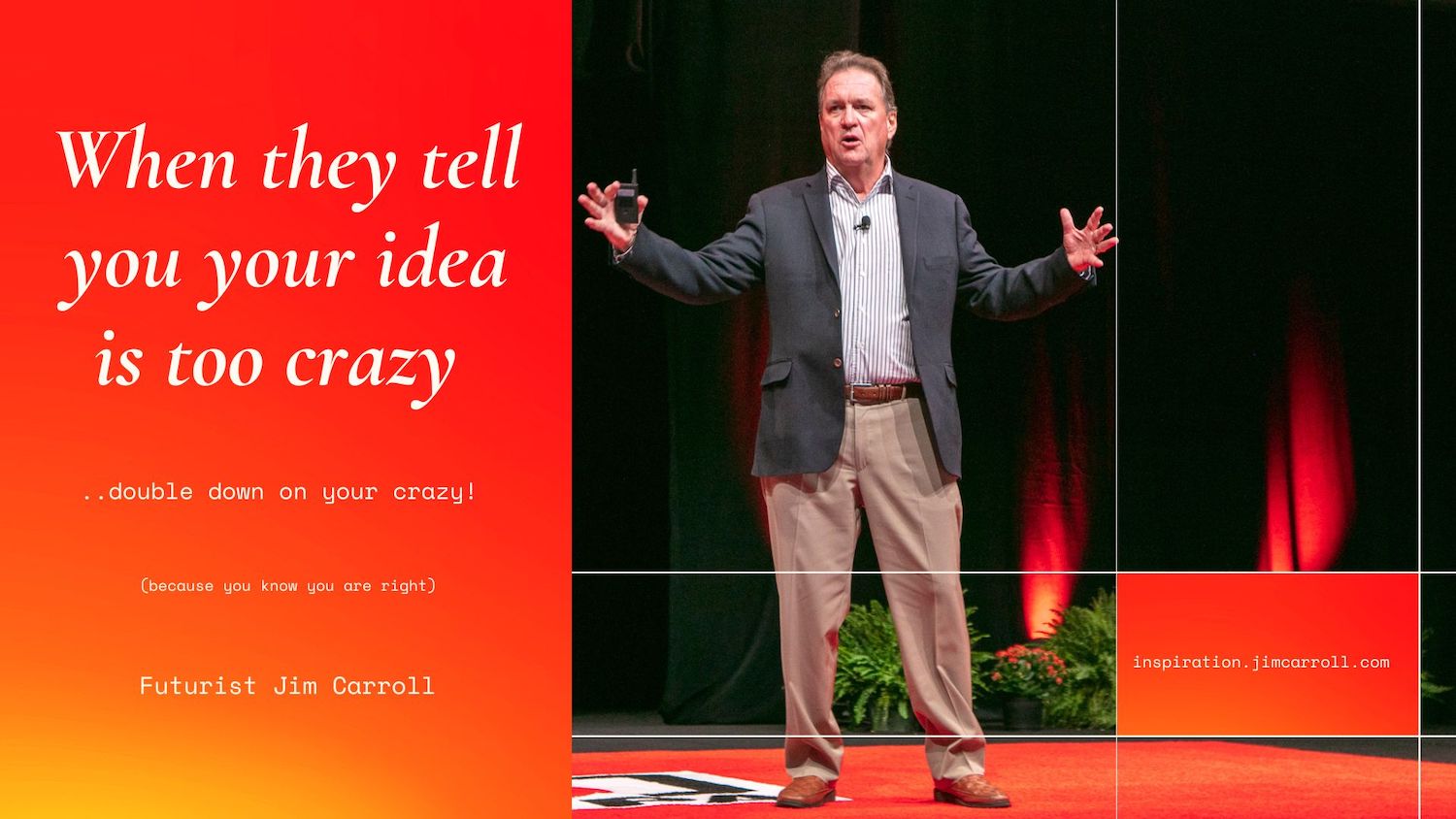 This is a story that began in 2006 when some conference attendees called out a crazy idea that I was sharing from the stage. Short version: some tech folks didn’t like a prediction I made – they said it was too crazy to be considered. An industry publication looked into it, and also said I was crazy. I took offense – I’m not crazy, just smart. So I pushed back on the publication, and they decided to contact some eminent theoretical scientists to follow up.

And – LOL – all these eminent scientists said to the publication and the industry that I wasn’t crazy – I was quite right! They confirmed that what I predicted from the stage would eventually happen!

Since then, each and every year, my prediction has transitioned from ‘crazy’ to reality.  And yesterday, with this news article, it was confirmed that my prediction wasn’t crazy at all – it was bang on! 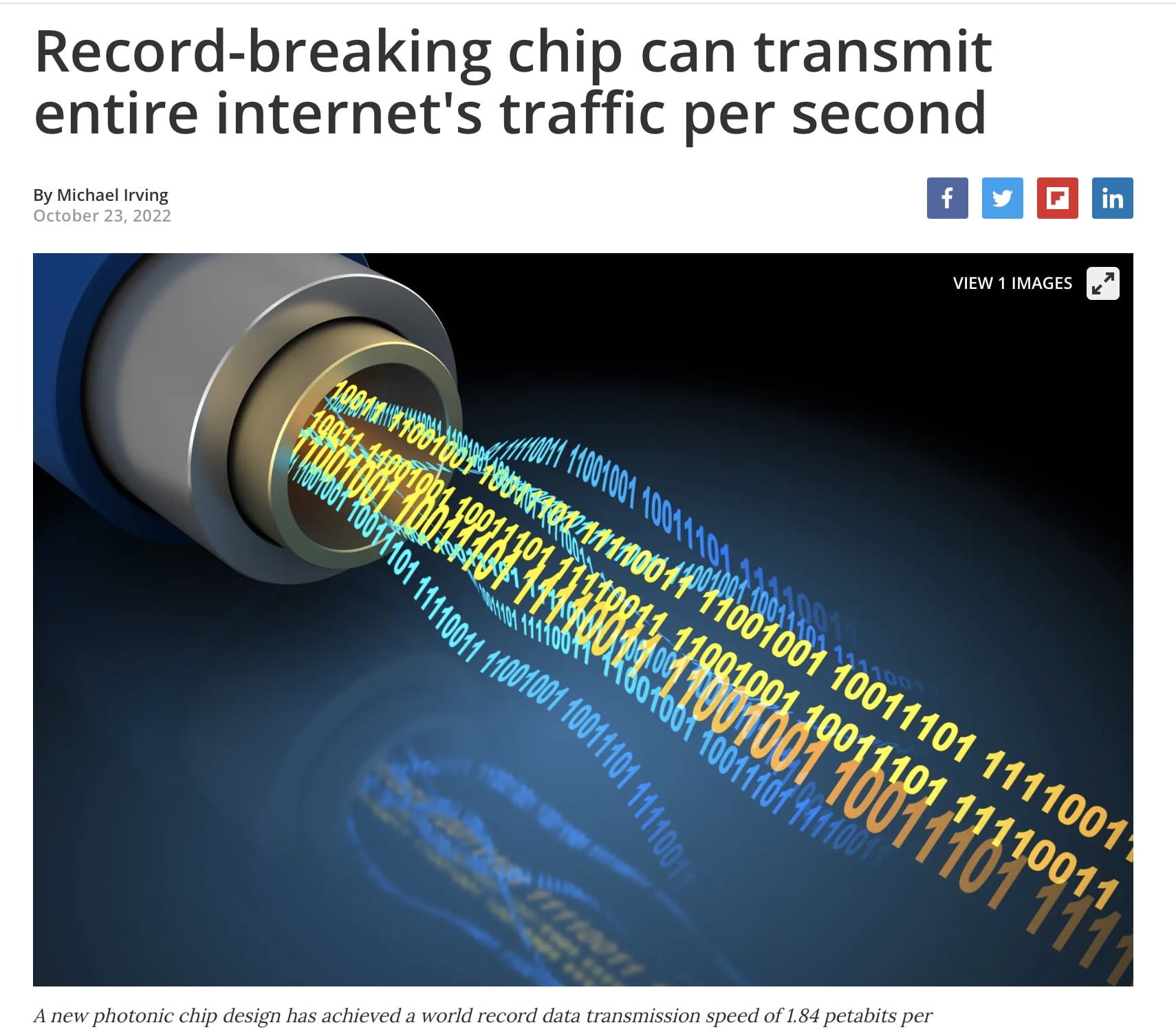 What can you learn from this crazy little story?

f you want to be innovative, focus on the crazy.

If you want to succeed tomorrow, focus on your crazy.

ecause every great idea was once a crazy concept. 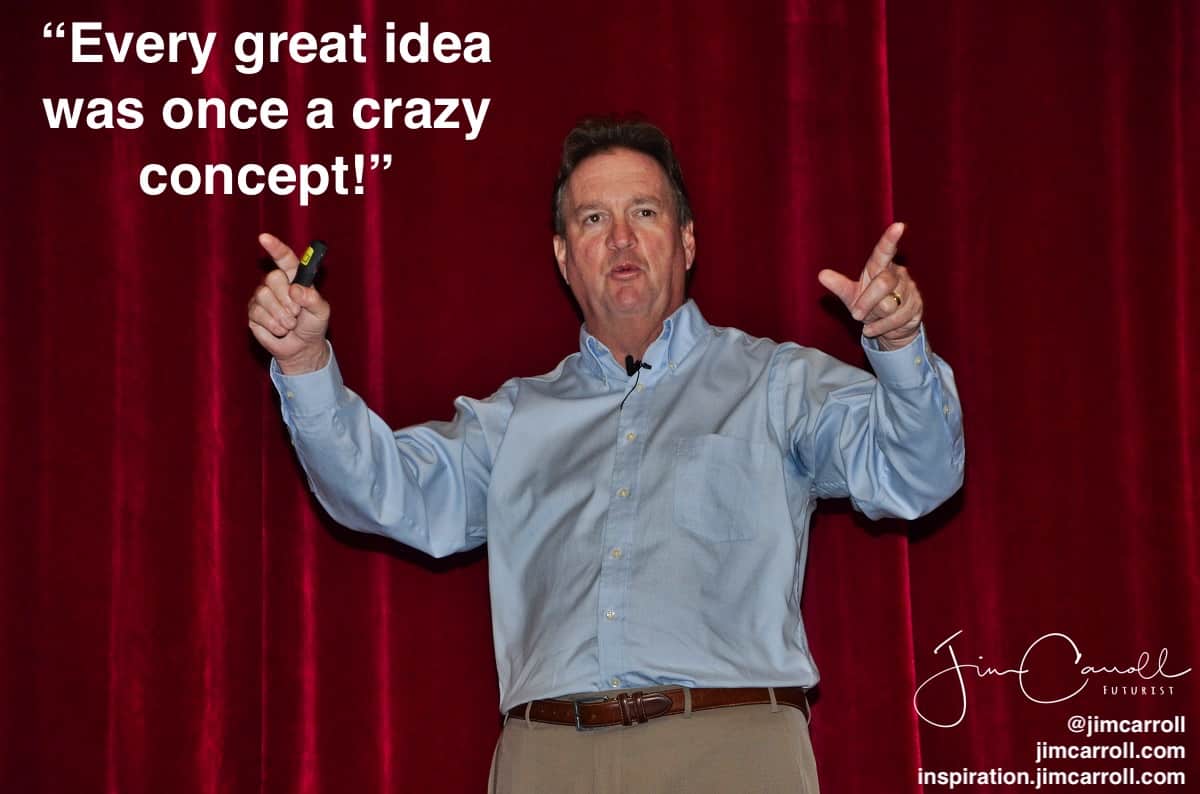 One thing we know – people will always laugh at your crazy ideas, and they are usually wrong!

Why? Many people have a belief system that has them convinced that the world of tomorrow will look much like it does today, with the result that when they are confronted by the future, they dismiss it. When they can’t conceive a reality that is so far-fetched it seems to be too extreme, they call it crazy. They call you crazy.

But take comfort in the fact that if people laugh at your ideas, it usually means you are on the right track. You aren’t crazy – they just have small, limited minds. 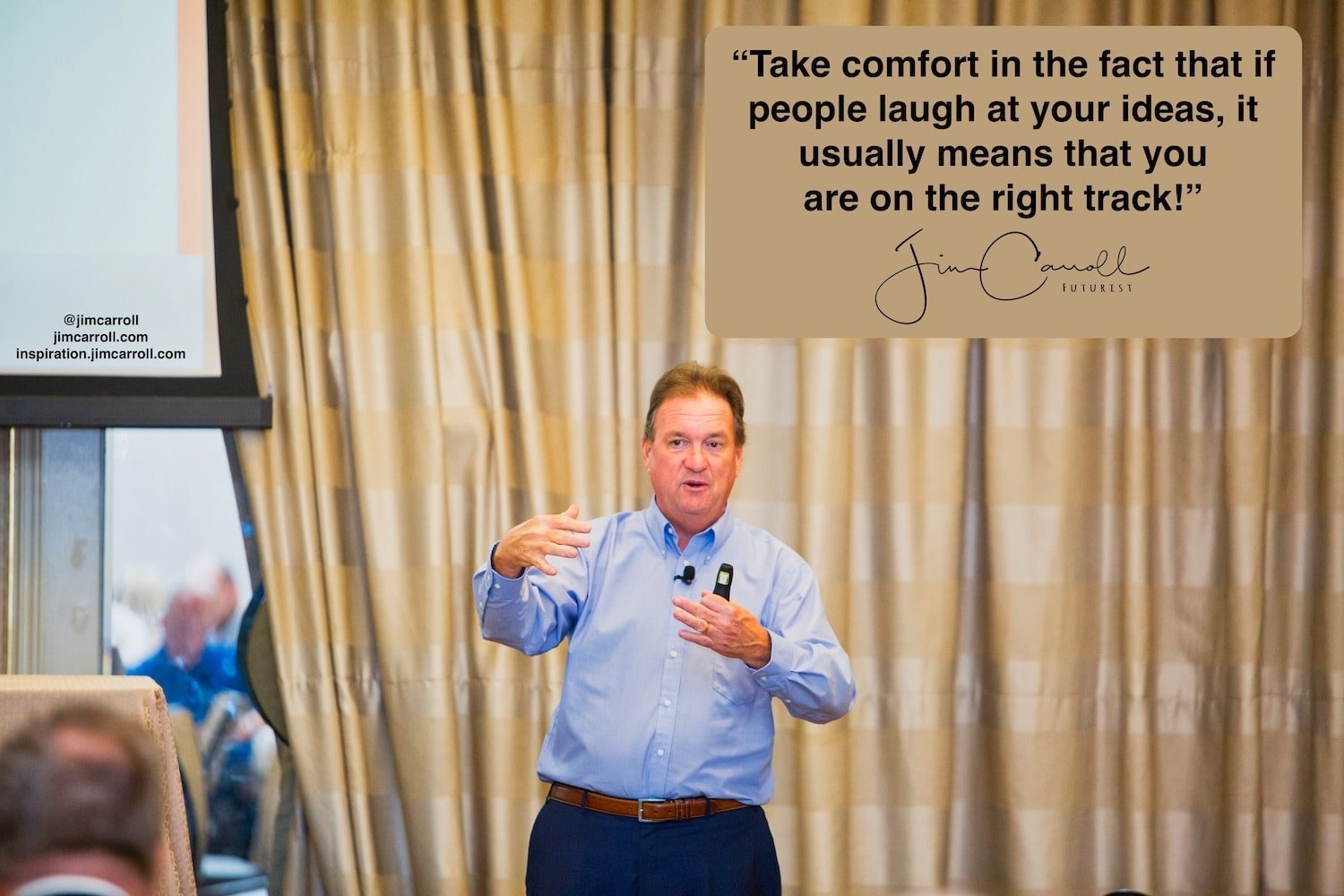 What does it really mean when ‘they’ laugh at you?

It means you are onto something.

Because they don’t know how our future works – and you do. In today’s future, crazy happens faster. 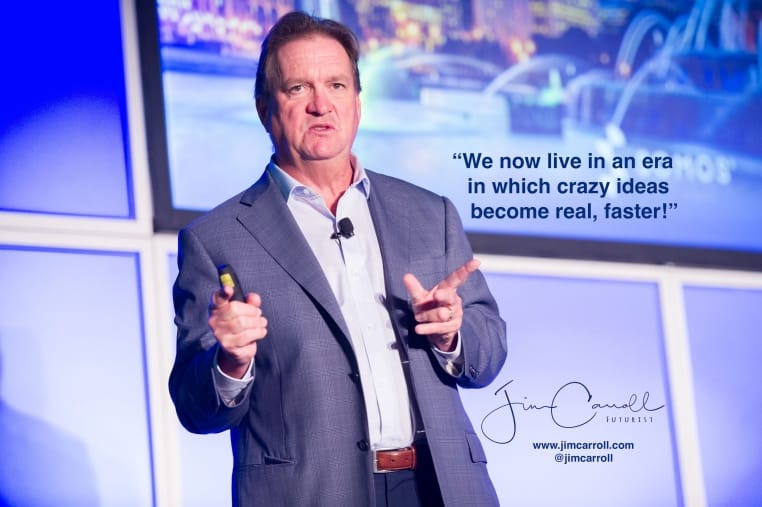 Our future right now is based on the fact that those with crazy ideas can make them un-crazy faster.

So here’s the thing. Find your fellow crazies! You’ll get to your future faster. Share your crazy ideas with others – and you might find they aren’t so crazy after all! 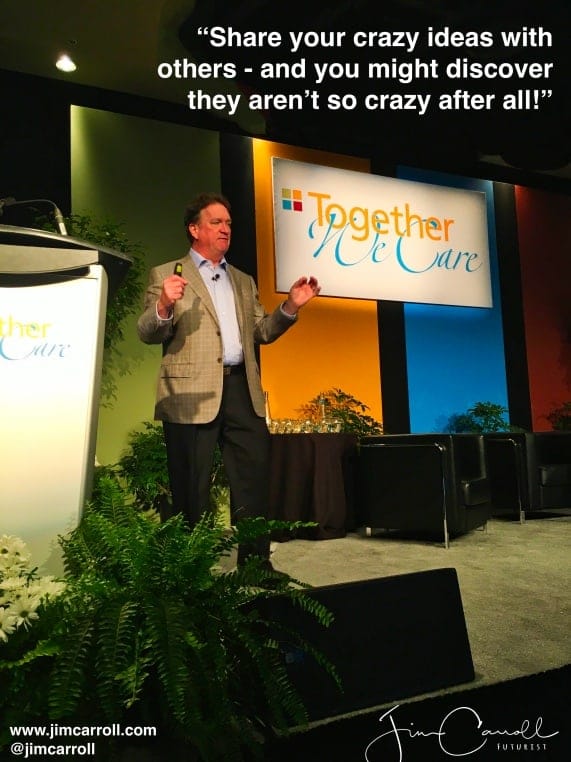 Because no idea is too crazy, no goal is unreachable, and no effort is too imperfect. 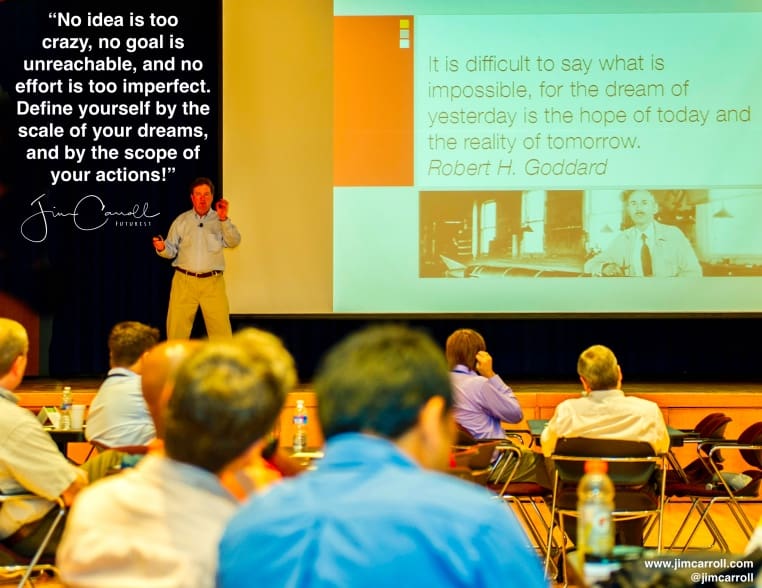 What was the crazy idea that I suggested back in 2006? 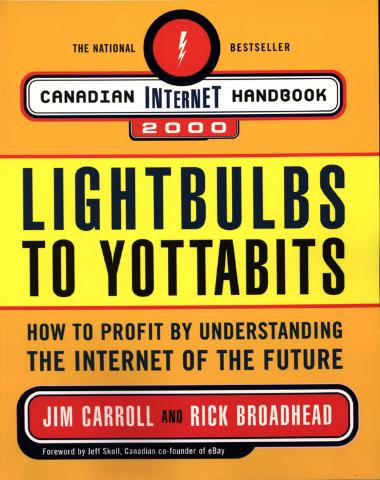 It was this – one day in the future, we would have optical chips and routers and networks that would do crazy things with light photonics – perhaps even stopping light in its tracks. The result would be that we would be able to build networks and chips and technology that could hold vast quantities of information – perhaps we could place the entirety of the Internet on a chip!

There was nothing crazy about what I proposed; indeed, this was the focus of an entire chapter in a book I wrote with my co-author in 1999, “Light Bulbs to Yottabits: How to Profit By Understanding the Internet of the Future.”

Long since out of print, the book was pretty crazy at the time, but amazingly right – everything it predicated has become true.

Chapter 3 was given the glorious title, “Of Photons, Dense Waves, and the Elimination of Accountants: How the High-Speed Internet of the Future Will Soon Be Here . . . Faster than You Think!”  And it opened with a quote that really says it all: “We’ll be in the business of manipulating photons.”  Bryan McFadden,  Vice President, Optical Networks Applications Unit, Nortel Networks

And we proceeded to explain – the yottabit!

“We want to introduce you to, and then take you on a voyage to understand the concept of, the yottabit. It is a strange, massive number that represents the absolutely ridiculous volumes of information that will likely be sent and received through the Internet in the not-so-distant future.”

Consider these two predictions from that chapter:

Similarly, your TV will pull programming off of the Internet. It will access regular signals, cable signals, and in addition, link to the Internet in order to pull in any one of the hundreds of thousands of “Internet TV stations” that will be broadcasting.

Extreme narrowcasting will be the broadcast model of the future

The “shows” that you watch or access will be aimed at a “narrowcast” market: by 2005, there will be a burgeoning small-scale entertainment industry, as millions of people take advantage of the technology made available to them today to broadcast audio, video, and multimedia to small-scale audiences around the world.

Today? TVs with Netflix built in – and YouTube! These were just a few of the predictions we made that were astonishingly bang-on.

Fast forward a few years. In 2006, I was the opening keynote speaker for a conference of telecom and cable engineers. I had about 3,000 of them in the room.  One of the trends I outlined was that we would see accelerating innovation in terms of bandwidth capacities, particularly as we innovated in terms of optical fiber technology.  I suggested to them, for example, that one day soon we would build a router that would stop light in its tracks, examine its packets, and in doing so, see innovative opportunities that would lead to massive increases in accelerated bandwidth. I then spun a story of a world of excess bandwidth – and that perhaps, one day, we might have a chip that would fit the entirety of the Internet in its circuits.

I get used to it.

It means I’m on the right track!

What happened then? Some folks in attendance complained to the conference organizers. “How can you bring in someone with such crazy ideas?” Others voiced their skepticism to an industry publication, which ended up writing an article on my crazy observation, dismissing it entirely. I took umbrage, complained loudly, and suggested they might reach out to some experts. So they did – they reached out to the global scientific community – specialists in optical technology – who listened to my crazy idea and said, ‘well, he’s not crazy.’

Which pretty much announces the arrival of the crazy idea I was talking about on stage in 2006.

I told the whole story here:

People Will Always Laugh At Your Crazy Ideas: They Are Usually Wrong!