Daily Inspiration: “Ignore those people who say that the future is too hard, that it can’t be done, and that it is too expensive. (Because they don’t know how the future works!)”

“Ignore those people who say that the future is too hard, that it can’t be done, and that it is too expensive. (Because they don’t know how the future works!)” – Futurist Jim Carroll 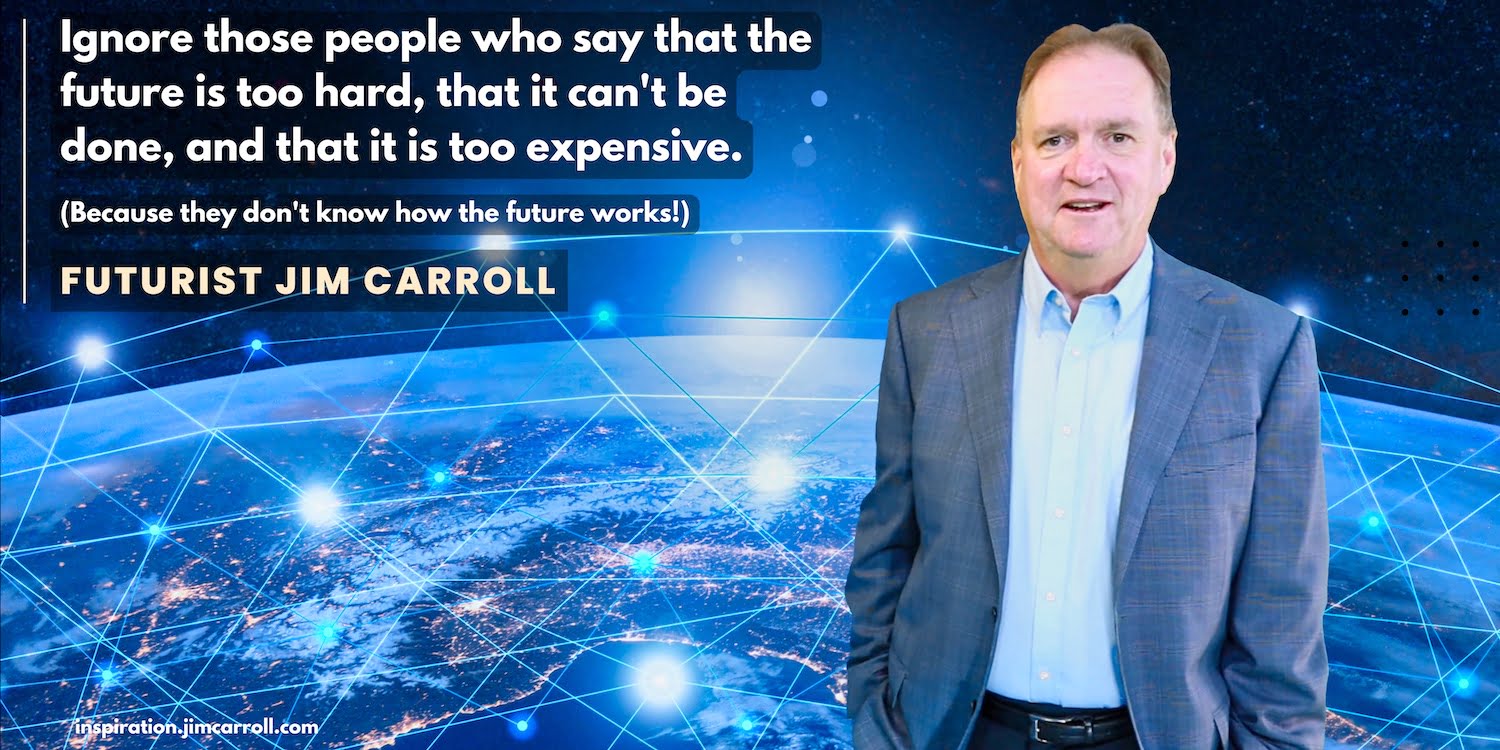 I’m a sucker for an opportunity.

And here’s a big one: one solar panel on five square meters of land can displace one barrel of oil. The planet is burning? There are pathways forward.

There is a way out of this. It’s not hard. It was not expensive. In fact, the economics are compelling.

What is necessary are corporate leaders willing to commit to investments; political leaders abandoning their hypocrisy and their efforts to line their pockets with carbon dollars; a severe pushback against denial-based anti-science conspiracy-driven agendas; and a clear message that this can be done.

Need some inspiration? Let me give you a list of random things.

Right now, the vast majority of new energy projects in North America involve renewables – solar, wind – and battery technologies. Bloomberg has stated that of $11.5 trillion going into energy investment by 2050, 85% will be into wind, solar, renewables, grid, and smart energy tech. Oil is over – we all know that.

Is it economic? Already, some 60% of global solar and 15% of global wind projects cost competitive with carbon alternatives. Continued scientific and tech advances with solar and wind mean that from this point on, carbon – natural gas, oil, coal – will always be operating at a cost disadvantage  By 2030, 90% of wind and solar will cost competitive. Capitalism, folks. It sorts out the future.

Sunshine! In Perth, Australia, and other sunny locations, it’s already cheaper to run your entire home entirely from solar and batteries than it is to do some from the grid.

Architecture! Soon, it will be economically feasible to generate solar power through see-through windows that are essentially solar-generating glass. So, buildings become their own power sources, simply by standing. Buildings, particularly homes, are not yet really energy smart, but they will be! Small in-home microgrid technology that connects your thermostats, computers, solar and wind generation tech, your car, and batteries to maximize your energy potential and reduce your energy use are the next multi-billion market opportunity – and there is probably someone in a garage right now developing something that will blow your mind in less than a decade – and who will be wildly rich. Local area neighborhood energy microgrids – remember that phrase.

Cars? In Norway, electric vehicles are now being used for more kilometers of travel than their carbon counterparts. My Tesla costs me but pennies to drive which costs a carbon car $40 or more. The biggest problem with electric vehicles right now isn’t a demand problem – it’s a production problem. Legacy car companies have been caught flat-footed and are struggling to align to the speed of the shift.

Want to blow your mind? EXISTING renewable technology could theoretically capture 6,700 Petwatt hours of energy (PWh). In 2019, the total global energy demand was 65PWh! What’s that mean? Wind, solar and battery science AS IT EXISTS TODAY if deployed, is more than up to doing the job. 100 times more!

One day we’ll look back and realize that the era of oil lasted for about 150 years – and that it then came to an abrupt and dramatic end. That one day? It’s happening right now!

Oil is over. If you want it. If John Lennon was alive, he would be singing such a refrain in order to remind us of the goal – while at the same time reminding us we are fools for not pursuing it harder.