Laugher? It’s the Worst Medicine – And Indicates A Culture of Failure!

Category under: Creativity, Disruption, How to be innovative, How to Innovate, Innovation
DAILY
MOTIVATIONAL
INSIGHT
FROM
JIM 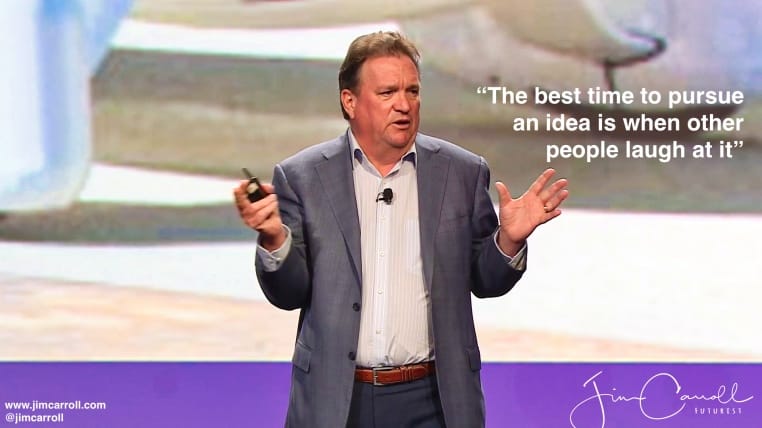 Many people have a belief system that has them convinced that the world of tomorrow will look much like it does today, with the result that when they are confronted by the future, they dismiss it.

Often, by laughing at both you and the idea at hand.

Case in point – back in 2006, I was the opening keynote speaker for a conference of telecom and cable engineers. I had about 3,000 of them in the room. One of the trends I outlined was that we would see accelerating innovation in terms of bandwidth capacities, particularly as we innovated in terms of optical fiber technology. I suggested to them, for example, that one day soon we would build a router that would stop light in its tracks, examine its packets, and in doing so, see innovative opportunities that would lead to massive increases in accelerated bandwidth.

Some complained to the conference organizers. “How can you bring in someone with such crazy ideas?” Others voiced their skepticism to an industry publication, which ended up writing an article on my crazy observation, dismissing it entirely.

But wait — after that, a number of leading optical scientists came to my defense, and said my prediction was bang on! You can read the resulting blog post which covers the industry publication, When Light Stops.

Fast forward – this news story several weeks later caught my attention. We seem to be getting really good at stopping light! Who would have thought? But that’s not the first story in this regard; I’ve been tracking the trend for years.

If People Are Laughing At You, It’s a Good Thing!

“Take comfort in the fact that if people laugh at your ideas, it usually means that you are on the right track!”

Have you noticed that Tesla is on a tear?

While I never get into stock prices & predictions (for which my youngest son is eternally grateful!), I do find some vindication from the fact that people are buying these cars in quantity & that the radical ‘new’ business model they pursue seems to be working. After all, I’ve been talking about the business model for almost 20 years.

So here’s a story: back in 2003 or so, I was at a global meeting of auto executives at Mercedes HQ in Germany. It was a small meeting – 15 or 20 executives. The goal was to outline what the industry might look like in the future.

I was there to provide an external, unbiased viewpoint.

At one moment, I spun a story about how the industry might evolve as the result of changing consumer behavior, the impact of the Internet & new production concepts.

I said that cars would not be built to inventory – they would be built to demand, based on actual orders. Dealerships would go by the wayside as people bought the car, sight unseen, online. The car would be delivered to you in a box – with a party-in-a-box inside to help you celebrate your success!

I called it the GoogleCar – suggesting that it would be a hi-tech company, not a legacy auto company, that would pursue such a brash and bold future.

They laughed at me!

I took their ridicule and turned it into a story for the stage. Over the next decade, I would tell the story of the mythical ‘GoogleCar’ as an example of how big and bold thinking could change the future. At first, audiences laughed at the story. But over time, they weren’t laughing at the concept as Tesla emerged & business models were challenged.

Why do people laugh at your ideas?

There could be any number of reasons – entrenched interests, a corporate culture in which mediocrity is rewarded, and which original thinking is punished. Maybe they live within a seething pit of skeptics, unable to comprehend how their world is actually changing.

Whatever the case may be, be ready for them!

Groupthink Laughter is a Dangerous Thing 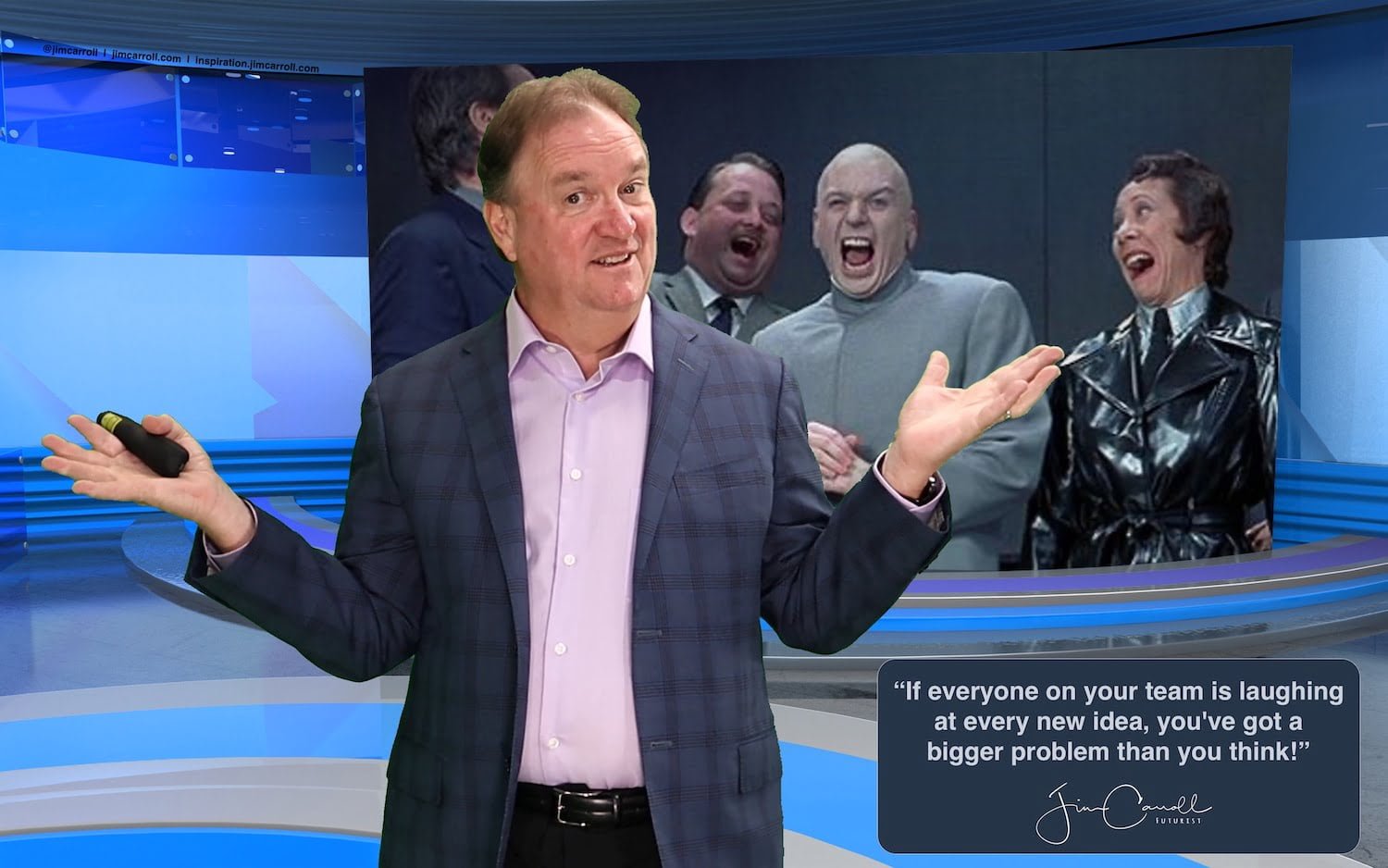 “If everyone on your team is laughing at every new idea, you’ve got a bigger problem than you think!”

Here’s the thing about the future — it’s fast, it’s huge, and it increasingly involves ideas that once seemed crazy becoming a reality.

If you want to be innovative, focus on the crazy. You just might discover some gems of creativity in there. You’ll discover the future.

And realize the best time to pursue an idea is when other people laugh at it.

Laughter is the best medicine – until it becomes an ingrained, destructive force that kills new ideas. And that’s the risk you run if you let a culture of continual skepticism sink into your organization.

You know that you are failing. Ideas are being lost, opportunities are being squandered, and initiative is in a rut. How do you know? Because you KNOW that your organization has a culture that is killing creativity. When everyone laughs at any new idea, that’s one of the symptoms of what’s gone wrong!

Jim is the world’s leading global futurist, keynote speaker, business trends and transformation expert, and professional optimist. Over the last 25 years, Jim has shared his insight from the stage with over 2 million people. His clients include NASA, Disney, the World Bank, Mercedes Benz, the PGA, Blackrock, the Wall Street Journal, Pfizer, Microsoft, Cisco and over 1,500 more. He shares his insight with CEOs, senior executives, government leaders, and leadership teams worldwide.

He has built a 28-year career on stage in which people at first laugh at his predictions. Then, they realize they shouldn’t be laughing – they should be listening.