Home   >   Uncategorized   >   Daily Inspiration: “Your commitment to a disruptive future will never succeed without a solid foundation!”

Daily Inspiration: “Your commitment to a disruptive future will never succeed without a solid foundation!”

“Your commitment to a disruptive future will never succeed without a solid foundation!” – Futurist Jim Carroll 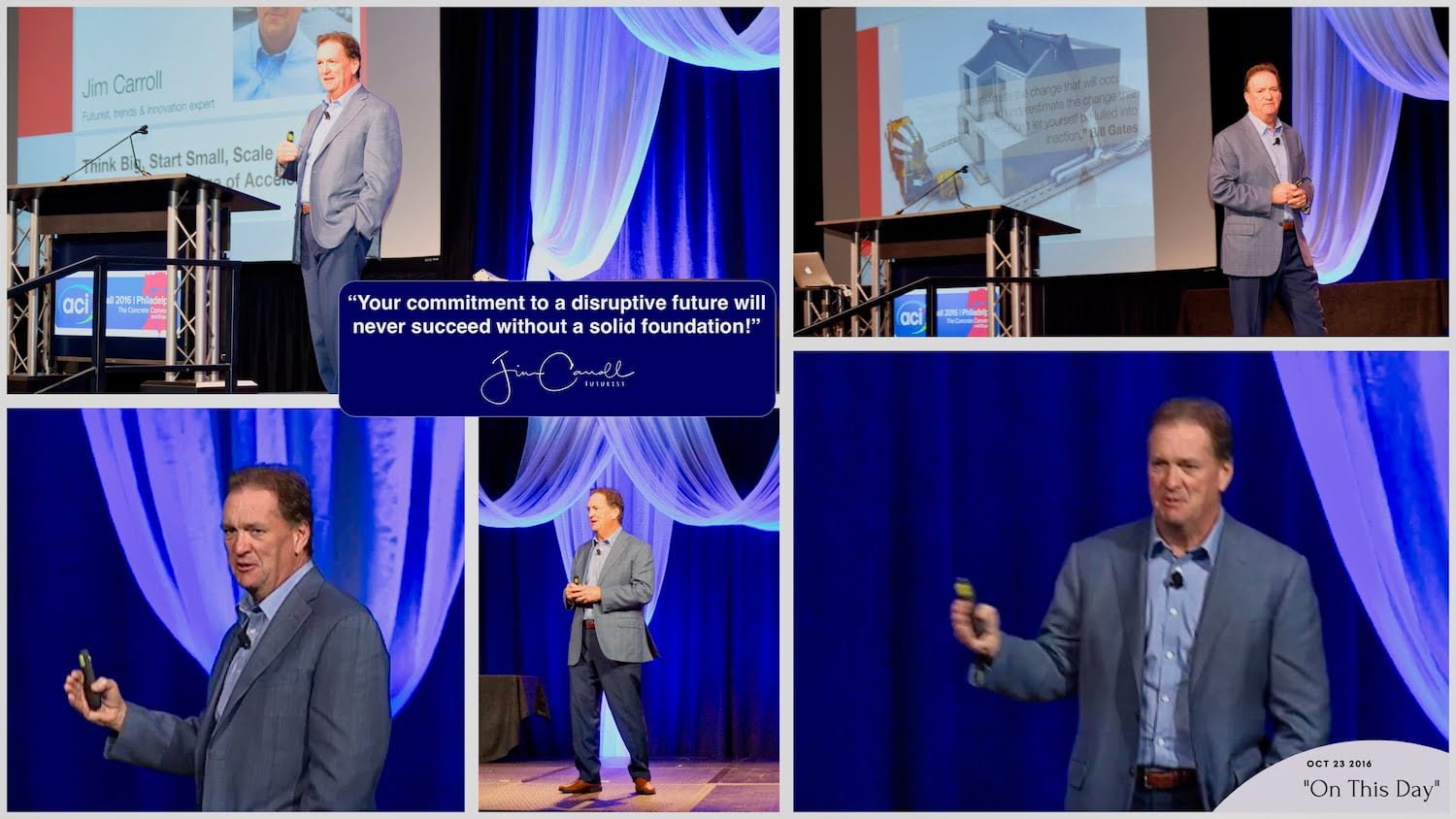 Your ability to change will always require a solid foundation! That’s the type of message that, pre-event, I  drove my family crazy with! After all, a keynote for the American Concrete Institute, Philadelphia, with a talk on such leading-edge ideas as 3D printing in concrete, the fast arrival of new construction methodologies, and the acceleration of materials science, had all kinds of potential for dumb jokes.

In the weeks leading up to the event, I would continuously comment that it would take a lot of hard work. The keynote would require a solid foundation, and my message would take some time to settle, but that my ideas would eventually take solid form. Overall, it would take some hard work, but I would strengthen the insight! (They told me to stop it with the concrete jokes soon enough! But right around this time, I was booked to keynote the North American Mushroom Council, which gave me ample opportunity for more lame jokes!)

The event itself was fascinating – this was the first time this organization had a keynote speaker to open their conference, and it was obvious that there was some concern about bringing in an ‘outsider’ to launch the event!  That changed fast — feedback had me hitting a huge home run, with subsequent coverage in American Concrete Magazine and elsewhere.

Consider this bit of insight which ran within an industry publication:

…partially instigated by the convention keynote talk by Jim Carroll, “Think Big, Start Small, Scale Fast: Innovating in the Age of Acceleration” …. our industry does a poor job innovating. New ideas are either ignored or grudgingly accepted over a period of many years. While we do have some big thinkers, scaling fast seems never to happen. We regard things like tilt-up construction as new and innovative—it’s only been commercially successful for the past 50 years or so.

Part of the problem is that the concrete industry is such a loose conglomeration of competing segments. Tilt-up versus precast versus CMUs or fly ash versus slag cement or steel fibers versus synthetic fibers. And while competition is healthy, we seem to spend a lot of energy fighting one another instead of growing the entire business. And once the associations get involved, each has its own niche to protect and that’s important but it sometimes stands in the way of progress.

… When most people think of concrete as cracked with chunks spalling off bridges, those of us who love the material and the concrete community have some work to do.

The keynote had me issue a challenge on stage, yet to be achieved – the industry should establish a moon-shot of sorts, developing the ability to 3D print David’s Michelangelo in concrete. That stirred up some interest – the article was eventually picked up and printed by the World Economic Forum, several industry publications, and multiple blogs.

What’s your boldest goal? Maybe you should find a hard one and let the challenge settle in….