Daily Inspiration: “To get to the idea, at least turn the lightbulb on!”

“To get to the idea, at least turn the lightbulb on!” – Futurist Jim Carroll On this day, 6 years ago! I’m in New York City, leading a conference on the future of energy infrastructure for GE, as it worked to continue to position itself in our new world of connected energy architecture.

The keynote came about as I had been on the radar of their executive leadership for quite some time; and, fun fact, I’d shared the stage at many events with Jack Welch up to this time. I had already been writing a series of articles for them that outlined the nature of our energy future – intelligent devices, massively smart micro-grids, a focus on renewables, smart homes, the Internet of things, smart factories connected by IoT devices, and more. Hit the energy section of my website and you’ll find a number of these articles; a PDF of the particular article related to this engagement is below.

My slide deck was typical of the extensive work I’ve put into most of my presentations; it wasn’t just a pretty bit of motivational crap that most of the audience would forget within an hour – that’s the Chinese food of the speaking circuit! Instead, it was chock full of extensive, original research into trends in the home and industrial energy industry, as well as the future of the electrical energy business. Looking back at our focus on renewables today and the clear fact that oil/carbon is a sunset industry, it was pretty much bang-on.

It also challenged the audience – a mixture of energy, construction, industrial, government, retail, and other folks somehow involved within the industry – to light up their minds with new ideas. Check the kid on the screen in the bottom left – I described to them that as the world of energy became smart, we would probably see the emergence of a new professional of people who develop the smarts to help us best exploit this smart world. If that makes sense!

The essence of my talk is found in the context of this opening section from the related article:

1. Acceleration: Today is the slowest day of technology change for the rest of your life.

It’s important to be ready for this acceleration. Your opportunity in dealing with this is continuing to ingest new ideas, new technologies and new methodologies to solve problems.

In the not-so-distant future, we will likely have connectivity in cars that researches 3-bedroom, 2-bath homes for sale in your neighborhood, and then drives you directly to each house for a tour. We already have augmented reality displays built into ski visors and goggles that tell you, in real-time, how fast and far you’ve skied—this same technology will be integrated into automobiles in the not-too-distant future.

It’s important to be ready for this acceleration. Your opportunity in dealing with this is continuing to ingest new ideas, new technologies and new methodologies to solve problems.

Want to learn more? Here’s a link to the PDF of the article below. 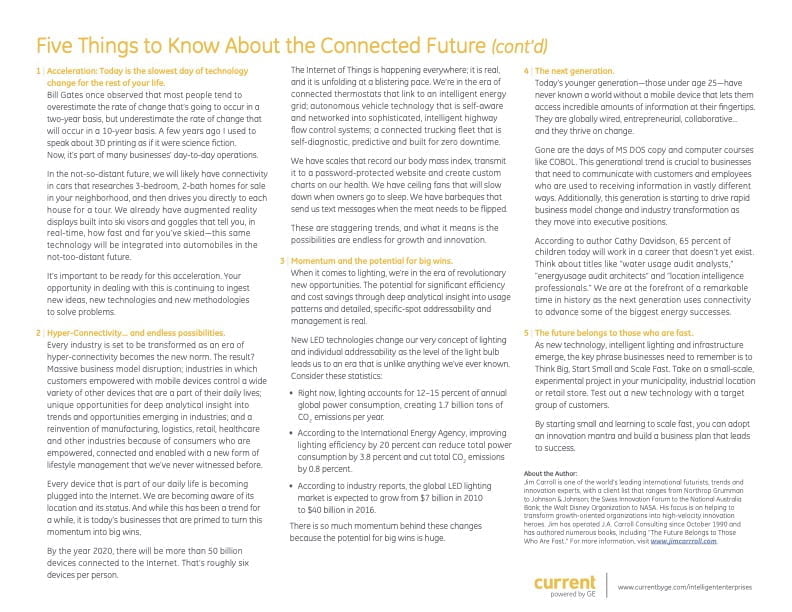