Daily Inspiration: “It’s pretty obvious that the ability to return to where we were is being held back by those who refuse to accept what it will take to get there!”

“It’s pretty obvious that the ability to return to where we were is being held back by those who refuse to accept what it will take to get there!” – Futurist Jim Carroll 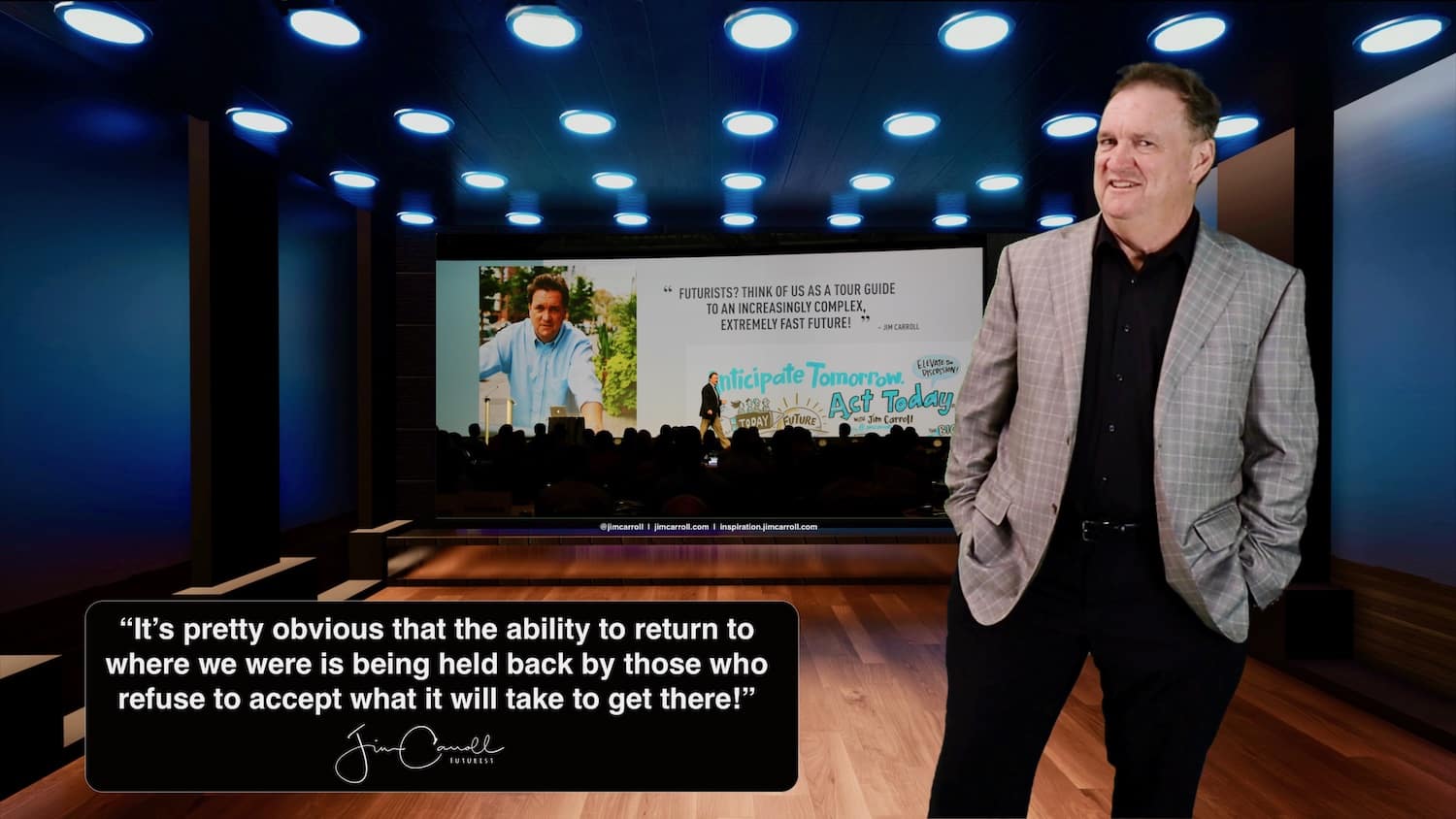 It’s fascinating how quickly our world changes – we’ve gone from “we need a vaccine” to “when will the vaccine be distributed?” to “I won’t take a vaccine, are you kidding?” in but a matter of months.

If there is one trend that is clear, it’s that the ability of a society to implode because of the sorry state of its maturity has accelerated. Watching the anti-vaxxers and the issue of vaccine-hesitancy is like watching a car wreck in slow motion – you know how it is going to end up; you want to turn away, but you can’t but help to take a look.

Since my job is to talk about trends, let’s talk about a significant one: it’s becoming pretty clear that the US won’t be able to soon have the nice things that it wants – and as it strives to get them, it’s going to be incomprehensibly ugly. The government has achieved something remarkable in getting 200 million people vaccinated in very short order but knows that it is going to be a tall order to reach many of the rest.

The result is that the science of herd immunity means that it will be out of reach.

Compare that to Britain and Israel, where the same type of demagogue-leader-driven hysteria and mental illness does not exist – they’ll be able to have nice things because the anti-vax mental illness does not exist in the same scope! And in my home country of Canada – although we are in the midst of a slow rollout driven by supply issues, and we are in the dark depths of a major wave – the uptake will be pretty significant. We’ll be able to have nice things!

And so the US at this moment and well into the future will be a land of fascinating but damaging contradictions. American Airlines is hiring back all of its pilots, expecting an explosion in travel demand. Major conferences are being scheduled in a wave of expectation for the fall. People are talking about a return to the ‘good old days.’

But here’s one thing to think about – future, reliable economic growth will come to those nations who have the maturity to deal with reality. If I were a CEO, consider a future investment, Britain, Israel – and hey, Canada – would be top of mind. You can’t make things great again when a pandemic becomes endemic, washing waves of illness over a country in a regular series of outbreaks that will further drive apart the existing split in society.

This has become one of my biggest trends that outline our future – the big gap between the desire to return to where we were and the ability to get there.