Daily Inspiration: “Creativity? Be that one in every crowd!”

“Creativity? Be that one in every crowd!” – Futurist Jim Carroll 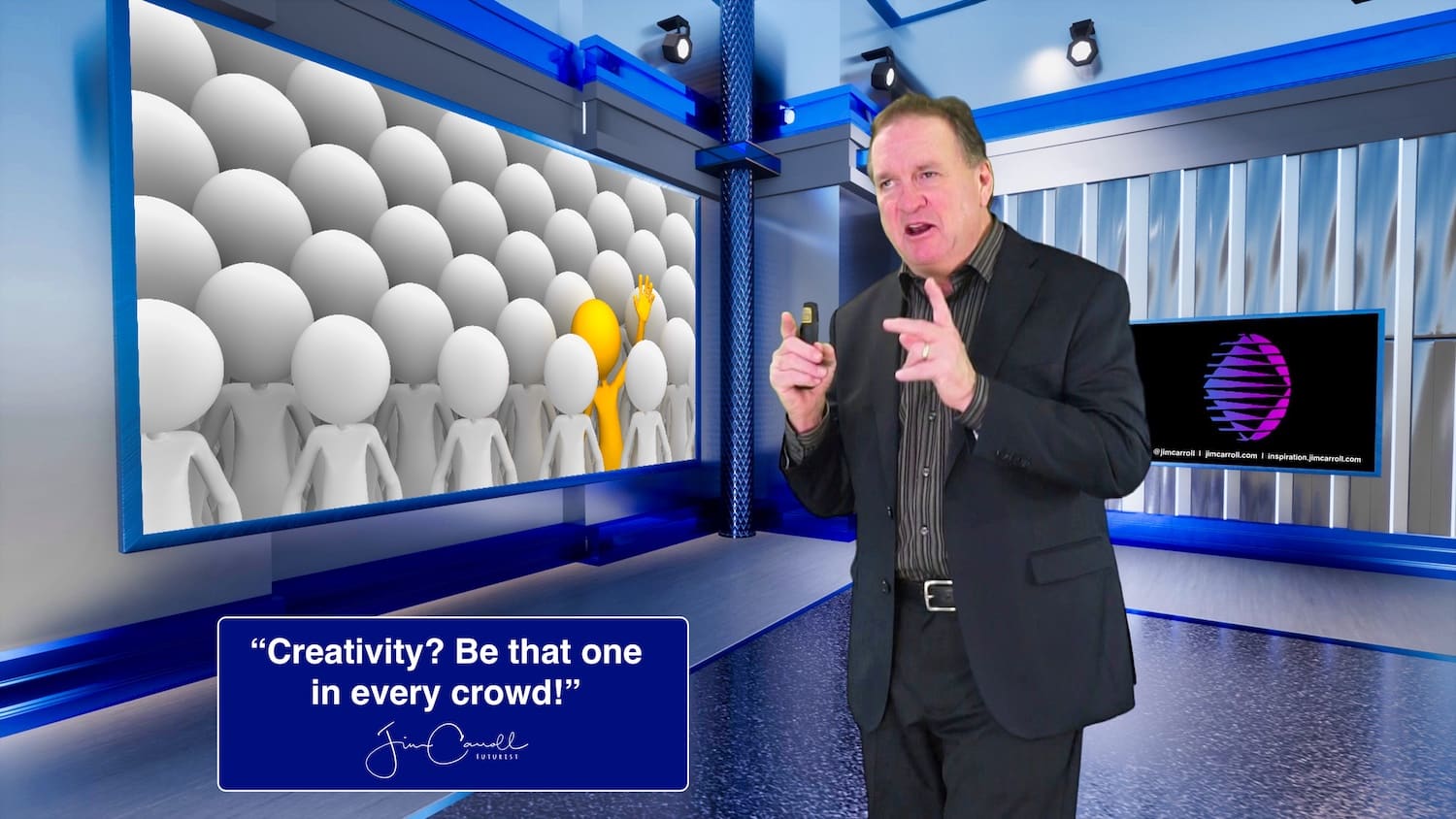 What a load of rubbish.

Know this one simple fact that you must confront each and every day: you are surrounded by people who want to crush your creativity!

Fight back. There’s something inside you that is unique, and it’s dying to get out. You’ve got creative energy burning deep within your soul, and you are surrounded by people who want to douse its flames. You’ve got an idea that is deep and personal to your creative soul, but you have friends who tell you that it’s but a pipe dream.

Don’t let them stop you.

That was certainly my experience – watch this clip from a keynote at a major EY Tax conference, in which I reveal my actual professional background – and what I encountered along the way!

Crushed creativity? Read my story below from back in 2019 in another daily inspiration post. Since this is EXACTLY what I’m talking about, I’ll repost it here verbatim.

Read my story. Write your own!

Otherwise, you will regret each and every day that you witness the smoldering embers of your future opportunity fading to nothingness right in front of you. 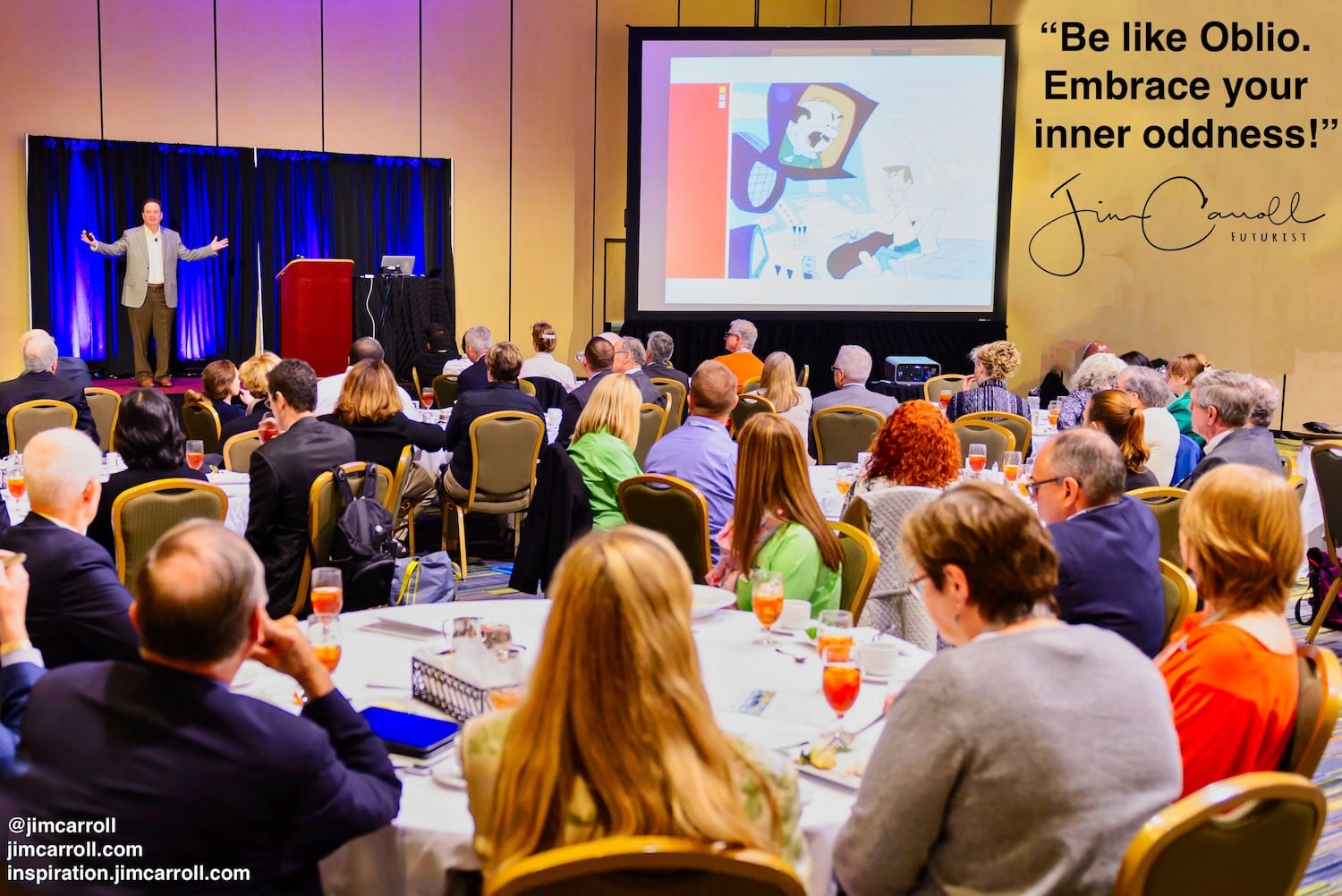 At some point in time you might realize that you are different from everyone else.

Yesterday, I obtained the ISBN for what will become my 39th book in a career as an author over 25 years – in this case, “Think Big, Start Small, Scale Fast: Stories from the Stage on Innovation, Disruption & Our Accelerating Future.” It will be published later this fall, by my publishing arm, Oblio Press.

He was a magical character in singer Harry Nilsson’s 6th album, “The Point,” which featured the hit song, “Me and My Arrow.” In the album – and later, in the movie – Oblio was the only round-headed person in a land in which everyone, by legal dictate, should have a point.

The land, of course, was known as the Pointed Village. 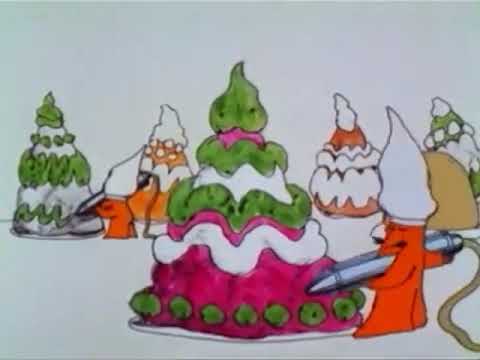 I’m Oblio – realizing years ago that I’m somewhat different from those around me.

If anyone had told me years ago that, as an accountant by background, I would be on stage around the world speaking about the Jetsons with clients such as NASA (who has had me in twice), I would have laughed in their face.

I seemed to know early on that I was kind of different.

I got in trouble in grade 3 for making stink bombs. Out of pens and sulfur matches. I read it in a book. I thought everyone did this type of thing.

I never went to history class in high school, since I had already read all of the books as a 12-year-old – and so when the principal called me into the office to discipline me, I asked him how I might improve from a mark of 98? I spent my time instead of as head of the high school radio station, blasting Led Zeppelin out to the jocks who wanted to listen to disco.

In the accounting firm for which I worked, I used stickmen as audit tick marks instead of X’s & O’s. I was called onto the carpet for doing so. I decided they were out to crush my creativity.

When I discovered the online world in 1982, I abandoned my career, dedicating myself to a voyage into the connected future. I ended up writing a little book about the Internet in 1994; it became a best seller – I found myself on stage.

Embrace your inner Oblio. You’ll find your creativity in your oddness!