Daily Inspiration: “Seriously? So at what point in this disaster movie do you realize that it doesn’t end well?”

“Seriously? So at what point in this disaster movie do you realize that it doesn’t end well?” – #Futurist Jim Carroll 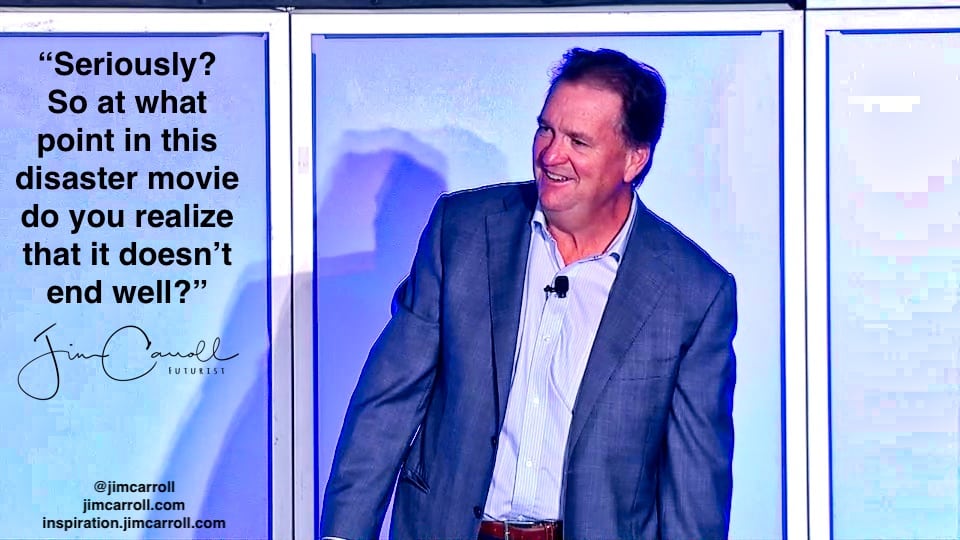 It’s quite the read – here’s a short synopsis from Forbes:

….it brilliantly and with impressive nuance and texture deals with the astounding questions of how the most educated and cultured nation on earth could unloose such a murderous, barbarous and genocidal war and why most Germans–Nazis and non-Nazis alike–closed ranks around Hitler, even when it became clear the war was going to end disastrously.

It’s fascinating how often a truism plays out : when things start to end badly that they end badly. Not great again, but badly.

As a futurist, you always have a little bit of certainty in the trends and predictions you are willing to put on the table; they are often the extrapolation of other trends that are already well underway, or are based upon certain obvious signals that surround you. Much of it is based on logic, common sense, rational thinking.

And yet, when logic has disappeared, insanity is in charge, and some people believe that Grandma implanted a 5G signal chip in your big toe as part of some global conspiracy – well, it’s kind of difficult to make a trends forecast.

Except to say, it probably won’t end well.

The world continues to be astounded by the fact that was once the greatest nation on earth is now doing the worst job at trying to contain the virus. Even beyond that, the fact that a core group of people still believe things are great, while people die around them when they should not be.

This is an extremely interesting yet disheartening tale of a civilized people’s descent into barbarism. “The German War: A Nation Under Arms, 1939-1945“, by Nicholas Stargardt

It’s going to be an interesting 100 days.