Daily Inspiration: “Every great failure has its moment of opportunity!”

“Every great failure has its moment of opportunity!” – Futurist Jim Carroll 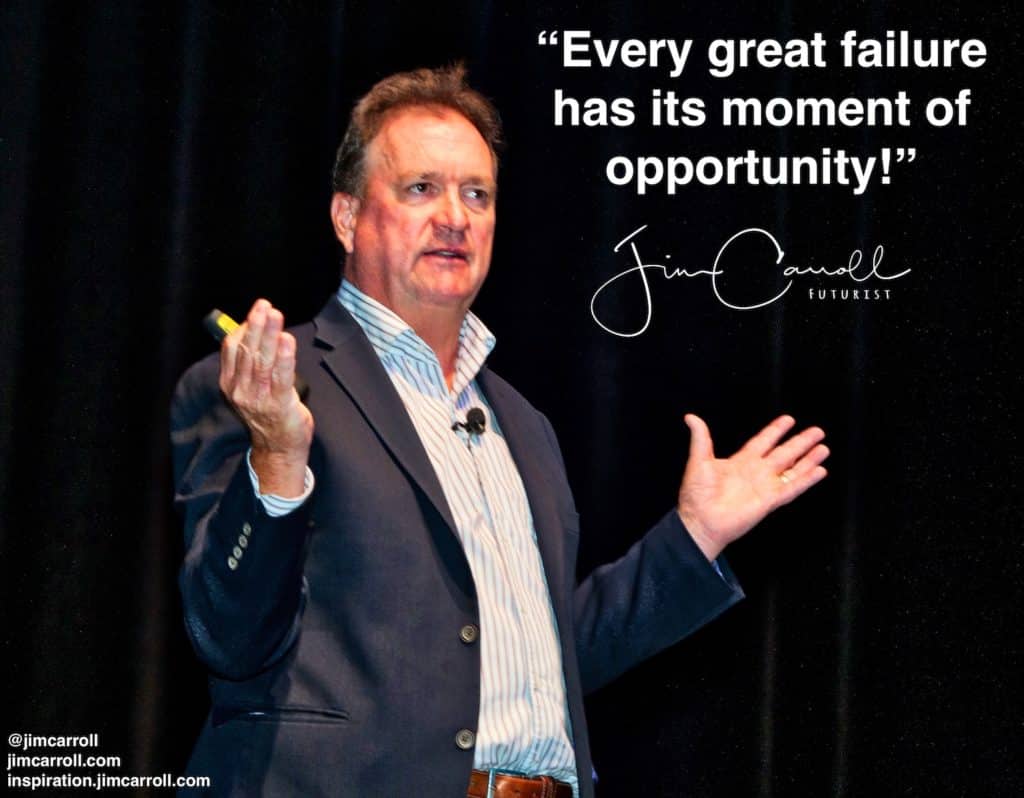 You always need to always be on your guard : vigilant, wary, cautious. Ready to reinvent and act at a moments notice, because just when you think you might have it made – the future has different plans for you!⁠⠀
⁠⠀
When you work hard to predict the future, it’s often pretty easy to find the most likely situations for potential failure, because the warning signs are all too frequent, and historical comparisons are all too prevalent.⁠⠀
⁠⠀
You will find future failure within the attitude of an individual, a team, a company, or even a nation. The result? Failure – it comes about with predictable frequency – just when you think you are on top, the greatest, it asserts its dominance.⁠⠀

It happened to the music industry, which found a gold mine in the sale of physical CD’s, but thought it could fight the shift to digital on a legal, rather than a business model basis. It happened to Kodak, who never bothered to ask the question, “what if cameras don’t have film.” Blockbuster, which never really pursued the question, ‘what if people don’t autarky need physical video formats.” Polaroid, which never wondered, ‘what if people don’t actually want to print pictures.’ Blackberry/RIM, which never challenged the CEO belief that small electronic handheld devices would only ever be used for texts and email – not as a phone, camera, and personal organizer, aka iPhone.

Sadly, the list goes on forever. Xerox had the original lab that saw Douglas Englehardt pioneer a computer interface methodology involving a graphical interface, a mouse and keyboard – and never capitalized on the opportunity, ceding the future to Apple. Motorola, which believed that it had its future solidified wth the popular Razr phone, and never really innovated again.  Sony, who clung to the belief that the cassette tape Walkman was the be-all and end-all of music entertainment.

And it it happens to entire nations, who somehow cling to a delusional mantra that they are the greatest in the world, while all around them a dramatic decline is combining with shocking, deadly negligence to accelerate a tragic fall from grace.

What is common to all of these situations is a blindness to the future, a belief in infallibility, and an attitude of invincibility.

As soon as these attitudes take hold – wham! – failure has its opportunity!