Daily Inspiration: “Every disruptive technology is an enigma to most people – until they take the time to discover the opportunity that lies within the mystery!”

“Every disruptive technology is an enigma to most people – until they take the time to discover the opportunity that lies within the mystery!” – Futurist Jim Carroll 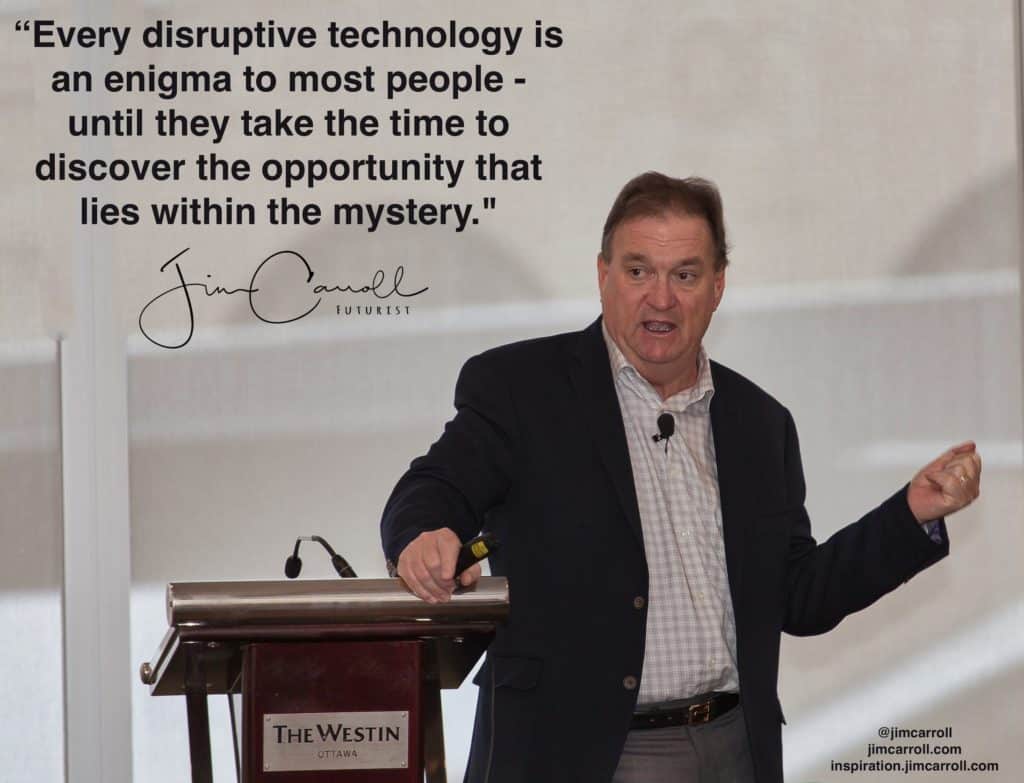 History involves a series of brilliant inventions based on brilliant ideas followed by long periods of inaction.

Let’s call it the “Invention-Adoption Gap.”

Case in point: E-mail was around in the tech world from the early 1980’s and had profound benefits for the business world – yet it really didn’t become mainstream until a decade later. The concept of the washing machine came about in the 1930’s, yet wasn’t adopted on a widespread basis until some 50 years later.

Often the delay is due to the challenges in bringing ideas to market and into production. The electric vehicle of today: the technology is clearly here, but it will be years before the concept has gone mainstream. In the world of healthcare, it is said that it can take 17 years between the time of scientific discovery and final clinical implementation.

What’s the reason for the gap?

In many cases, it’s because people are not convinced of the benefits – but in many other cases, they don’t even *understand* the opportunity in front of them.

Case in point – in a keynote yesterday for the golf industry, I spoke about the role of drone based aerial insight for turf management and analysis.

We’ve got a massive opportunity to better understand management of disease, health, irrigation and other issues on our golf course through sophisticated drone based mapping analysis. Yet few in the industry are actively pursuing the concept.

Why is this? People are committed to the status quo. To a degree, thye’re lazy – it’s easier to do nothing than something. They’re waiting for someone else to blaze a trail – they lack the courage to take the initiative on their own.

That’s why the innovation cycle has identified five types of people when it comes to adoption: the innovators, early adapters, early majority, late majority and laggards.

Where do you place yourself?

The best way to accelerate your future is to make a conscious decision to be in one of the first two categories!