Daily Inspiration: “The future? It goes to 11!”

“The future? It goes to 11! You can’t become comfortably numb, or dazed and confused in how you approach it!” -Futurist Jim Carroll 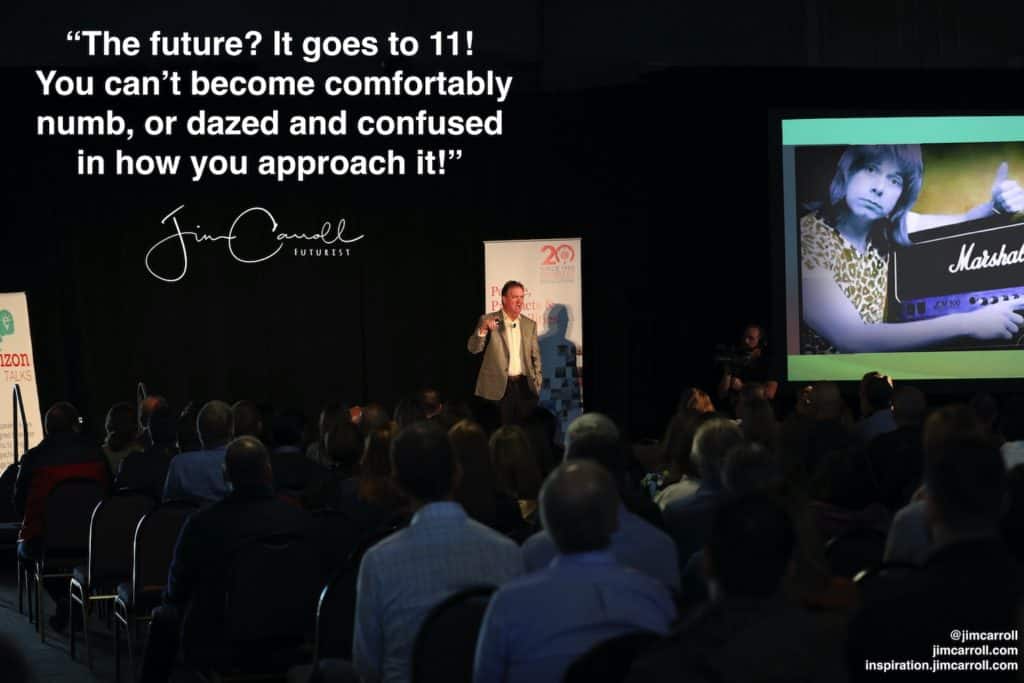 Spinal Tap! Still one of the greatest movies of all time.

And in the classic scene, guitarist Nigel Tufnel shows how his classic Marshall amp has been modified so that it doesn’t max out at 10 – it goes to 11!

If you don’t know the scene, look it up on YouTube.

Here’s the thing – I often explain on stage that the future now goes to 11. You thought it goes to 10, but all around you, it’s going to 11.

That’s because far-fetched trends become real faster than you think.

Case in point – in September, I keynoted AutoGlass 2019, an event for the North American automotive glass industry. I spoke of a potential emerging trend in which the windshield glass on autos and trucks actually becomes a solar energy generating device that recharges the electric battery in the vehicle.

Yesterday, a friend sent me a link to an article that outlined how Hyundai launched a car with a roof-based solar charging system in South Korea.

I was actually predicting and talking about this in 2011, in an article in which I suggested you take a look at 10 things around you and think about how they might change (the “10 Things Test”) – and specifically, how everyday glass would become an energy generating source.

Understanding the velocity of innovation – take the “10 Things Test!”

“Window shades. Think “smart-glass.” Our need for window shades will soon be eclipsed by intelligent glass that will automatically adjust its opacity and transparency for various conditions. The windows will also soon be covered by a film that absorbs sunlight which will generate electrical power. Whether it’s bright sunlight, a need to better manage heating and cooling costs, or to provide for greater privacy, it’s likely that we’ll see rapid changes with this basic component of the home and office.”

In other words, what seems far away is already here! What seems to be a stretch for an amplifier is well within reach!

It’s arriving sooner than you think, so live your future to 11!