Home   >   Global economy   >   Your Future: Is it Logic or Emotion Driven? (The Idiocy of the NAFTA ‘Replacement’ Story)

Your Future: Is it Logic or Emotion Driven? (The Idiocy of the NAFTA ‘Replacement’ Story)

Category under: Global economy, The Recession of 2020-2021, Uncategorized
DAILY
MOTIVATIONAL
INSIGHT
FROM
JIM

Guess what! Facts matter! (Oh, and science is real too, but that’s another story).

With that in mind, consider this: a year ago, NAFTA was very much in the news. People thought it was either dead, dying, being replaced – and that the negotiations by some old, illogical guy was going to see it replaced with something so much better.

Can Canada And The U.S. Find A Path To Replace NAFTA?
NPR: All Things Considered, 31 August 2018

No deal yet as US, Canada continue NAFTA talks with clock ticking toward Trump’s deadline
The Herald-Mail, 31 August 2018

People who live their world through the filter of reality saw it differently. I certainly did. Consider what I posted on Facebook one year ago today: 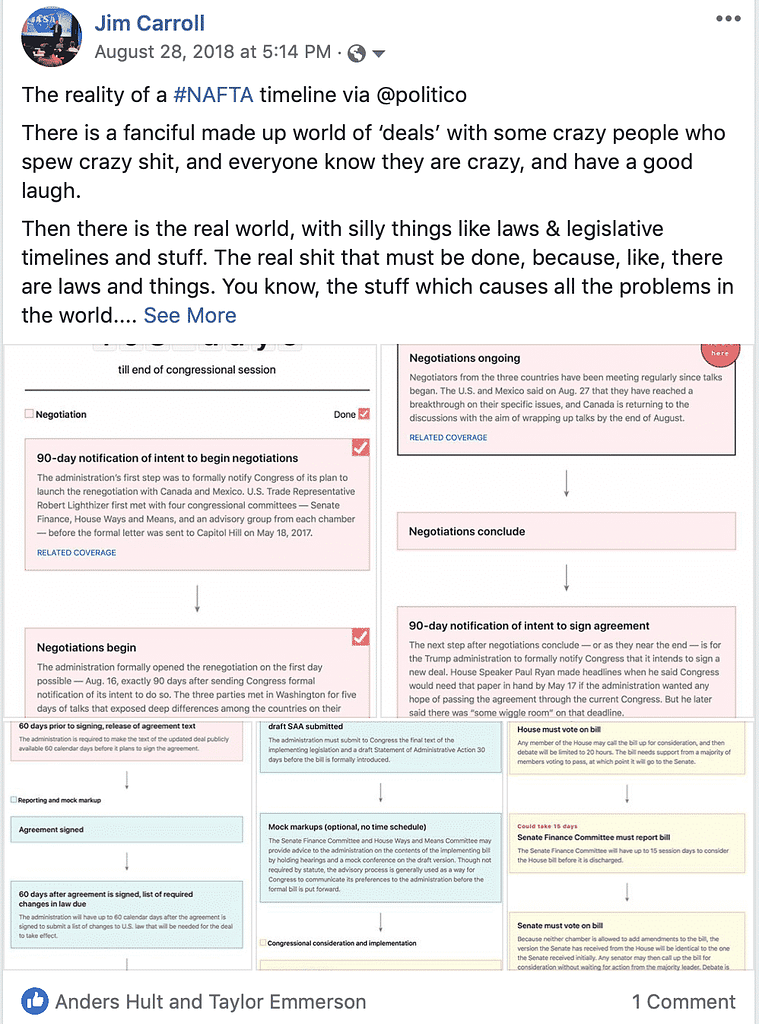 The inconvenient fact that drove my reality? As I pointed out, there’s a legal process in place that would guide it’s dissolution or change. Politico featured a long article in April of 2018 that put in place the long, complex series of steps that would be necessary to see any sort of change. You can go and read the original post here.

And so last year at this time, as headlines raged about the idea that NAFTA was in trouble, I concluded that absolutely nothing would happen

Turns out I was right. You’re welcome!.

Today? NAFTA 2.0 is pretty much dead in the water. There is no political will to move it forward; things are far too deadlocked in the US. The next election is upon us, and NAFTA, like many initiatives, is off the burner. The old NAG

In terms of the future, logic, not emotion, wins.

What does this mean for you?

Increasingly, as we go forward into a faster future and as you undertake your own trends analysis and assessment, you need to put things under an additional filter.

You need to learn to separate the political idiocy from the logical scientific or legal reality.

As we continue to go careening towards the trade-war-idiocy recession, and as volatility continues to rock your world, you should keep that in mind.