Daily Inspiration: “You should know better than to believe the sly fox who will con you. The future does not suffer fools gladly!”

“You should know better than to believe the sly fox who will con you. The future does not suffer fools gladly!” – Futurist  Jim Carroll 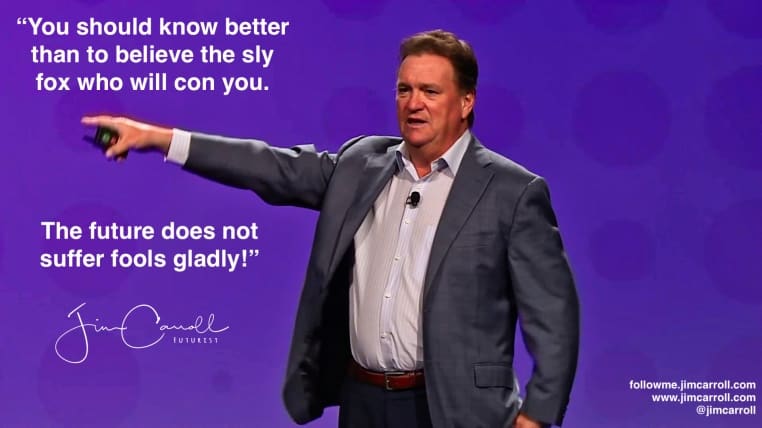 I’m of two minds of the people of Wisconsin.

Some fell for it, and should have seen it coming. Others saw what was coming, and tried to avoid the path of obvious future failure.

Guess what – the story will continue. It’s extremely likely that they won’t end up with al those ‘advanced hi-tech’ jobs they’ve now been promised either.

Why do people fall for con-men? Why do they seek an easy fix to the future and try to avoid the hard work that must be done?

The situation in Wisconsin is a microcosm of America today, where an increasing number of people are realizing they’ve truly been had by a fraud, while the same consistent number (around 60%) have known all along that the ‘emperor’ has no clothes.

There are useful lessons here, of course, in understanding the future, and why some trends succeed and others do not. I spoke at a manufacturing event in Madison, Wisconsin in October 2016 – at the peak of the US election campaign. I remember describing to the audience of manufacturing engineers the real trends unfolding in their world – advanced methodologies, robotics, 3D printing & more.

It was based on a post I wrote the year before: “Why US Manufacturing Needs to Reinvent Itself Fast”

It’s a concise summary of the hard work and effort that North American manufacturers must pursue in order to align to a big, global world of advanced manufacturing.

I remember the tone in the room in October 2016 – and one fellow who was smirking! I knew darn well that the big election debate had some believing in the easy fix and the magic wand. Magically, manufacturing jobs were going to come back!

If you follow me, you’ll know that I believe in science, innovation, and trends. There are no easy fixes; there are no magic solutions. There is only hard work and innovation.

The results are now being seen in Wisconsin – and in fact, across the US.