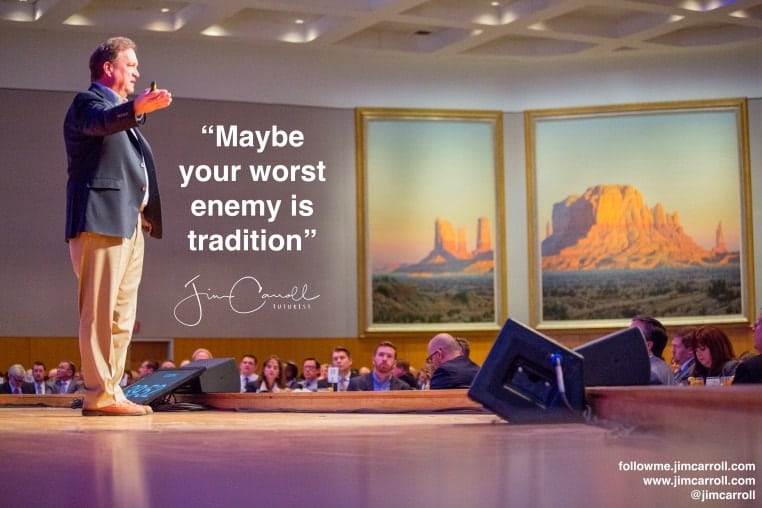 And in doing so, they forget that tomorrow will be, as it is said, a different day. When it arrives with full, disruptive, unrelenting force, they are fully unprepared! “Whoah, where did that come from” they echo.

Traditions are the enemy of innovation and creativity, because they bind us to routine. They plant us in the warmth of comfort rather than the chill of discomfort – the latter can wake you up and force you to get moving!

Traditions can be innovation and creative poison, because it can cause organizations and people to be too caught up in the past, which causes them to lose sight of opportunities for the future.

Tradition can get people to think too much about the ideas that created the glories of the past, rather than the new ideas which are necessary for tomorrow.

Consider the context of this picture – it’s actually from a keynote I did in the National Cowboy Museum in Oklahoma City last year.

What a great spot to think about both the promise and perils of tradition, and reliance on the glories of the past! I’ve come to believe that much of the political discourse in our world today is coming from people who believe that the past was so great – that we should preserve that way of life and manner of thinking as a pathway into the future.

The future doesn’t really agree with that frame of mind! It has its own disruptive, transformative concepts as to how things will be entirely different.

Don’t get me wrong – I’m a big fan of tradition when it is used at the right purpose, at the right time, for the right form of inspiration.

I just believe that overt reliance upon tradition is a dangerous thing. And so when it comes comes to your own traditions, you should define a new one, or transform and change existing ones.