Daily Inspiration: “Your attitude towards the future is just like running a race: if you already have the idea of defeat in your mind at the starting line, you aren’t going to see much success!”

“Your attitude towards the future is just like running a race: if you already have the idea of defeat in your mind at the starting line, you aren’t going to see much success!” – #Futurist Jim Carroll 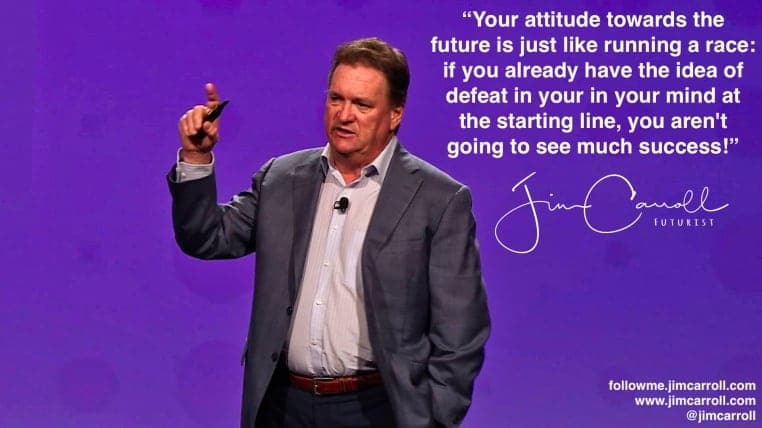 Some people defeat themselves merely by getting up in the morning – because as soon as they do, they convince themselves that it is going to be ‘just another day.’ With that idea in mind from the start, it’s pretty much guaranteed that they won’t try to do anything extraordinary. They’ve got failure embedded in their routine from the moment they get out of bed. ‘Just another day’ – what an awful phrase! There is never ‘just’ another day – a better frame of mind is that there is ‘every day’. Every day is a new day, full of new ideas that can lead to new opportunities! Every day is an opportunity. Every day is a fresh start. Every day is a sign of success.
When people start out with the idea that it’s ‘just another day,’ they immediately begin to limit the scope of what they can accomplish. Don’t do that. Do something else! If you don’t have a great attitude even before you run the race, you won’t run a great race. If you don’t think you can do great things in the future, you won’t do great things. These people need a ‘future-coach.’ Just like someone who counsels an athlete of the mindset they need to give the race their all, they need someone who can inspire them to achieve the great things they could if they align and innovate around fast paced trends. That’s what I do. I’ve been accused by some folks of being relentlessly optimistic. To that, I’ll ask the question – what’s the alternative to relentless optimism? What will THAT get you?