Daily Inspiration: “We live in an era in which someone has launched their own car to Mars. What’s your personal moonshot?”

“We live in an era in which someone has launched their own car to Mars. What’s your personal moonshot?” – Futurist  Jim Carroll 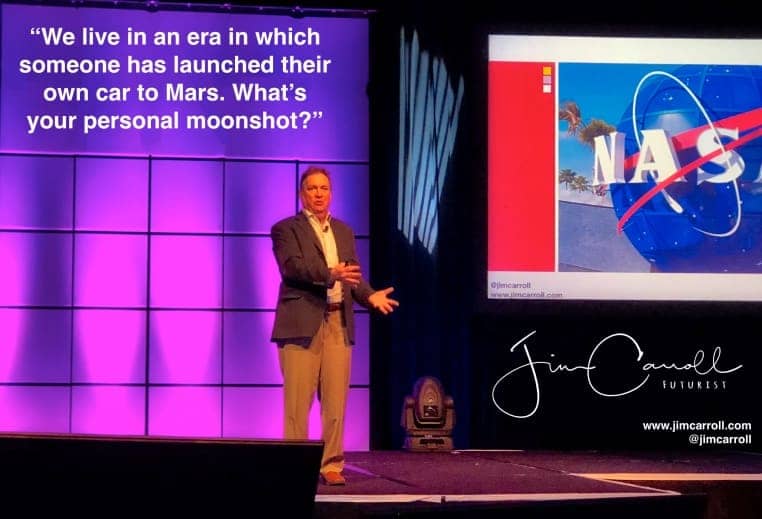 Another photo done in the air – for this one, I was on a  plane on my way to Dubai. Just before my departure, SpaceX had launched it’s Falcoln 9 Heavy rocket, and Elon Musk had the audacity to place his Tesla Roadster in the nose cone. The photograph beamed down from the heaves of the  Starman sitting in the Tesla on the way to Mars caught the attention of the world. It was only natural that my photo of the day would use that concept

You can’t help but be captivated by the audacity and daring of Elon Musk, and his initiatives with SpaceX, Tesla and the GigaFactory. He is busy reinventing entire industries!

In doing so, he follows a bold concept known as a ‘moonshot’ – define your boldest goal and pursue it. Emulate the big-thinking of the 60’s as found with NASA and the moon landings. No goal is too big – everything is potentially within reach.

Moonshot thinking is transforming entire industries. There are moonshots involving some of the biggest problems, challenges and opportunities of our time, having to do with education, healthcare, the environment, and obviously, conquering and colonizing space!

When it comes to your own mindset, maybe you should adopt your own personal moonshot – find and adopt the greatest challenge in your lifetime, and pursue it with passion!