Trend: Why Spatial Data Bubbles are Going to Be a Big Part of Your Life (And Why You Need to Know What they Are!)

Location intelligence was the hot new opportunity 20 years ago as spatial (GIS) data came to be a big part of the world. 20 years on, it still is. My oldest son is building a fabulous career working in the industry – he’s a leading expert in the use of tools such as ArcGIS, for example.

But move over for spatial data bubbles — all of us are about to become immersed in many different bubbles, and the implications are bigger than you think! 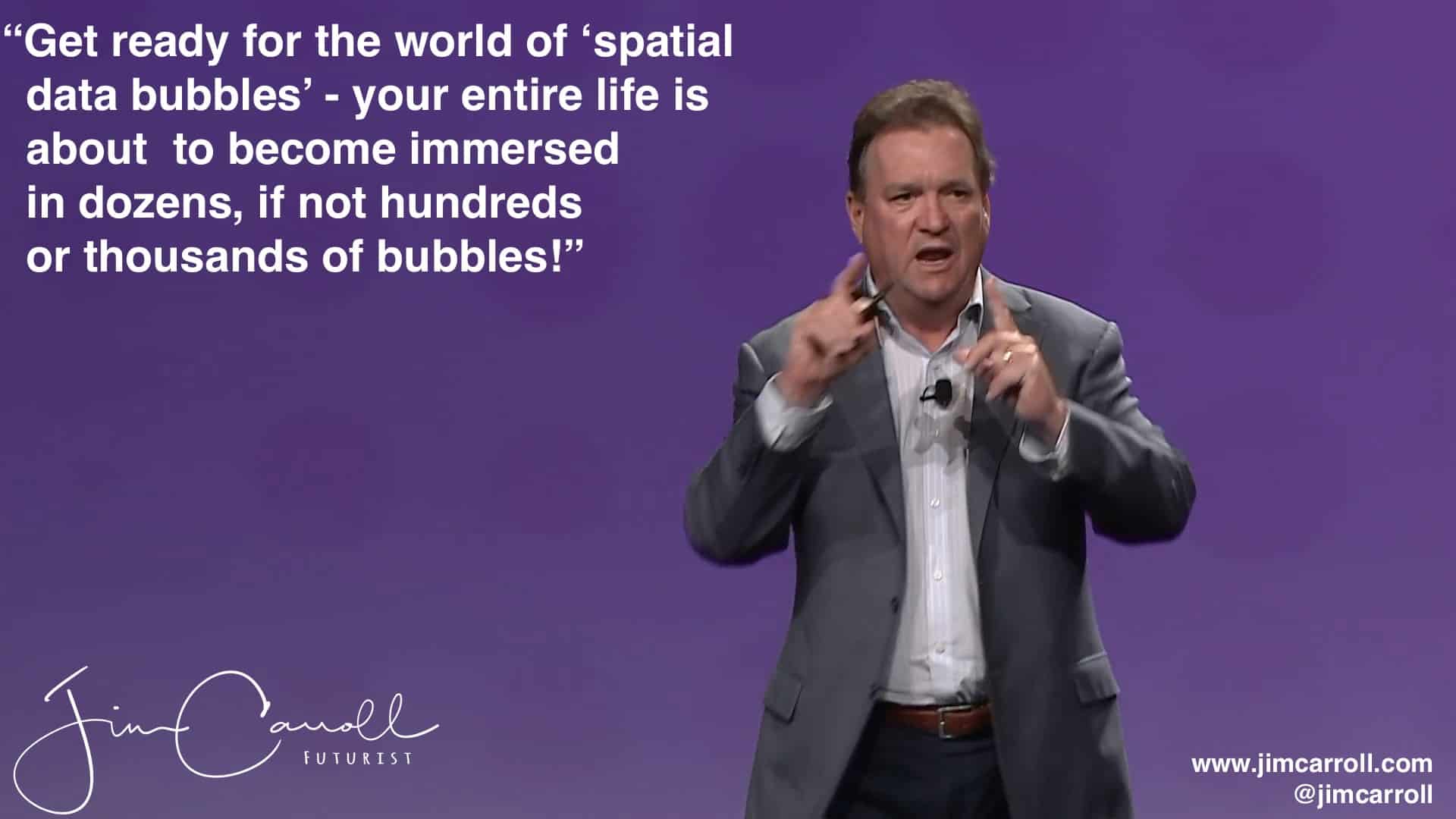 What is a spatial data bubble? It’s a phrase I’ve coined as I’ve come to spend more time thinking about what happens when we add location oriented data to data-sets that will envelope us in multiple dimensions. I first hit upon the realization of how important they will be when I was working out with my personal trainer one day at the gym, and was continuing to ensure she understood the impact of emerging smart clothing technologies upon exercise routines.

The simple fact is, I drive my personal trainer nuts when I’m at the gym. She will try and get me to do a certain routine that has my limbs or torso moving within a certain defined area. If they move within that area, I’m doing it correctly. At the same time that she is trying to get me to do this, I’m busy formulating in my mind how we could reinvent exercise in the future with spatial data bubbles! Here I am on stage talking about this idea — in this case, an opening keynote for the YMCA/YWCA.

How will this work? First off, smart clothing will replace wearable technologies – read my post on that. I’ve been speaking and writing about smart clothing for years — two years ago, I outlined in a keynote for the Sporting & Fitness Industry Association that this would be a major trend to watch. Some of the bubbles which are emerging will be fascinating: a golf ball in the future will be its only little spatial-data bubble information generator as it starts to transmit real time information on speed, velocity, location and acceleration! Most sports equipment will exist in little spatial data bubbles that also align goals and objectives to performance.

So it will be with exercise routines. The  emergence of smart-clothing will solve the problem of ‘firing’ the right muscles during an exercise routine, by providing information on whether I’m in the right spatial area.  In the future, we will be buying clothes that will have a variety of embedded sensors and technology. When my trainer gets to me to do a routine in the future, and these sensors will be used to generate a data bubble around my body. She’ll be able to set a tolerance range — say, 10 or 20%. The bubble will determine if my activities are within that particular spatial range within the bubble — if so, I’ll be rewarded in some way. The better I get at the routine the lower the tolerance with the bubble will be!

If my activities stray outside the bubble — well, maybe the clothing will zap me! Big opportunities for performance-oriented exercise routines!

Spatial data bubbles will soon be everywhere! They are emerging at a furious pace with the rapid emergence of self-driving car technology.

The typical self-driving, connected car is putting off some 7 gigabytes of data per hour. That’s a staggering amount of information — and increasingly, more and more of it will be spatial data bubble oriented. Self-driving cars and trucks will talk to intelligent highway infrastructure technologies which might guide them on their journeys, and in effect, create a little bubble of data around the vehicle involving obstacles, other vehicles, road sensors and other stuff. Then there is stuff that is already here: peloton technology that has self-driving cars and trucks involved cars communicating their lo0cation in time and space with other vehicles so that they can travel in a space-saving, wind-resistant pack. The data bubble of a car has 360-sensing capability, looking for pedestrians, other cars and other information.

Spatial data bubbles aren’t new: they’ve been around for some time. Perhaps the best example are the robots used in advanced manufacturing systems. These robots need to have continual 3D awareness. They used to be able to operate on their own; but as their spatial data bubbles have grown, they’ve become collaborative, designed to work in proximity to people. They’ve become more spatially aware, with cameras, sonar and other tech. This has allowed them to become cognitive and quality-conscious , with feedback on whether assembly is done correctly. Increasingly, they are capable of working in multiple planes at once, with multiple axis movements. Their bubble will extend to human-operators, who might increasingly use spatial bubble technologies such as Google Glass, for remote operation, in a virtual reality scenario.

A futurist in a spatial data bubble!

Virtual reality is going to have a massive impact on the rate of spatial-data bubble technologies, methodologies, data sets and more! VR will emerge as a significant tool for skills training, telemedicine, sports and so much more. And if you think about it, it’s all about data bubbles!

Location-oriented data is pretty easy and not terribly overwhelming in terms of quantity, because it essentially involves a couple of points on a map. Spatial data bubbles are infinitely more complex, because it will involve thousands or millions of data points involving that point on the map, and the areas above and around it.

If you think we’ve seen a data explosion in the past, we have, as they say, ”seen nothing yet!”