Daily Inspiration: “To really accelerate your creative engine, focus on growing your diversity of ideas!”

“To really accelerate your creative engine, focus on growing your diversity of ideas!” – futurist Jim Carroll

For years, I’ve explained to my global client base that access to skills and talent will been to the key element for success going forward. Two good examples? Fast trends in the world of self-driving cars, and the acceleration of trends in retail. 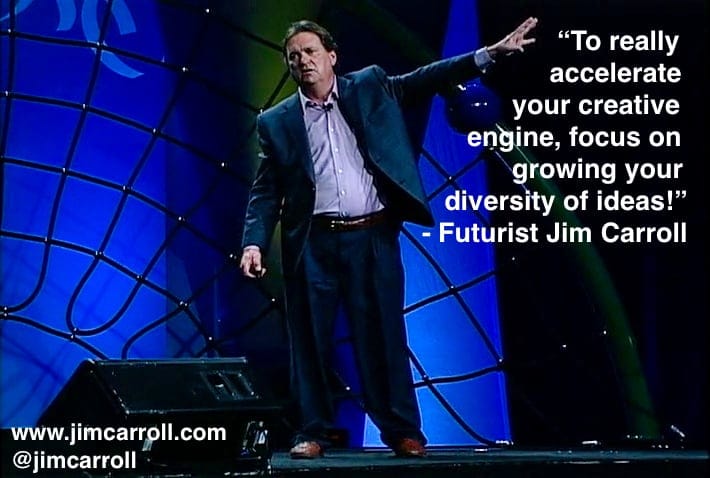 I was thinking about this today as two articles floated through my news clipping service: an article in Fortune that outlined how “Walmart Is Launching a Tech Incubator in Silicon Valley.” The second involved quite a few articles that spoke about the new partnerships occurring in the world of self-driving car technology, such as one in Sci-Tech: “Intel’s Not the Only Big Company To Find a Self-Driving Partner.”

There are two big issues that are in play here that can be summarized quite nicely, which I’ve explained for quite some time:

This is echoed by some research I presented in several recent meetings with major private equity investors, based on a study by GE, which found that among senior executives:

Key trend? The race for tech skills is going to accelerate; new forms of partnership will be established faster; lots of money will be made by those who have the requisite skills; and this will be a defining issue for success going forward!

Need a bigger example? This headline: “Ford is putting $1 billion into an AI startup, Detroit’s biggest investment yet in self-driving car tech.” Think about that — essentially, it’s a billion dollar investment to get the right skills, at the right time, for the right purpose.