Article: What’s the future of the office workplace?

Office Products International Magazine contacted me for an article about the future of the workplace, for their 25 anniversary issue. Obviously this is an industry that has a keen interest in the issue — after all, if your target market is the office, and that office is changing, you need to know! Here’s what I wrote!

What’s the future of the office workplace? People love trying to figure out that question. Futurist Jim Carroll is one of them…

When trying to imagine the workplace of the future, a good start is to look back at the cartoon show The Jetsons, which was first aired in the US in 1962 and purported to show what the world would look like in 2062 – 100 years on.

Watch The Jetsons today and it would seem most of its predictions have actually come true: autonomous, self-driving cars (although their vehicles could fly); video calling apps such as Skype or FaceTime (George Jetson used to communicate with his boss at Spacely Sprockets like this). He also views his news and other information on a flat screen TV – let’s say, using a version of our internet. In addition, Rosie the robot maid scurries about doing all kinds of things for the people that are a part of her ‘life’. 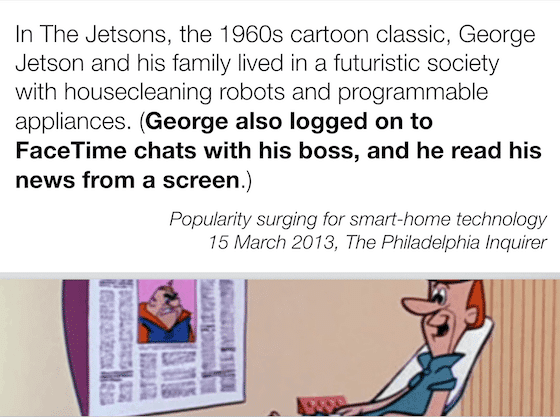 Taking note of science fiction, back-to-the-future scenarios, and even cartoons such as The Jetsons can provide glimpses into what the workplace might look like in the coming decades.

But let’s think in more practical terms, by aligning the office of the future to the careers and workforce that will be our reality.

In 1997, I coined the phrase ‘nomadic workers’ while writing Surviving the Information Age, and made the following predictions:

I was pretty much bang on with those trends – certainly much of it has already become true. More people work from home than ever before (in my case, I’ve had a home office for 25 years; my kids grew up in a world in which their parents have always worked at home).

A global war for the best talent means that there is an entire economy of highly-skilled nomadic workers. And in my own case, I joke that I work really hard to not have to go and get a job – instead, I hire out my future-forecasting skills to organisations worldwide.

Those trends will continue to play out in the future. But what else will happen? In my view, there are three key trends that will define the future of the office and the workplace: the rapid emergence of new careers, the continued rapid evolution of technology, and the impact of the next generation.

First, consider what is happening with skills, jobs and careers. Last year, I was the opening keynote speaker for the global WorldSkills challenge in São Paolo, Brazil, and spoke about the fact that we are now witnessing the rapid emergence of all kinds of new careers.

The key point here is that many of these new careers involve the processing of information which can be done from anywhere. An insurance risk manager that relies on drone technology doesn’t have to be on location, they can simply do their work from wherever they are.

The result of this is an even greater dispersion of highly skilled jobs around the world.

Organisations in the future will continue to hollow out, hiring skills and talent on an as-needed, short-term contract rather than permanent basis. Centralised offices will become smaller, with a core group focused on strategic goals that simply link to needed talent as and when required.

The second trend is the Internet of Things (IoT) which will provide some of the most fascinating changes in the workplace and office of the future. What is it really all about? Simply put, every device that is a part of our daily lives is going to become connected and we will be aware of its status and its location.

I often joke on stage that this could get a bit out of hand: I might get on my weighing scales one day, and it will send an email to my fridge, blocking access for the day because I’m not living up to the terms of my wellness contract.

The IoT will lead to some of the The Jetsons-type forecasts of the past. It’s quite likely that self-driving cars will result in mobile offices on wheels – the car does the navigation, so we’ll have more time to get some work done on the way to the office.

Massive hyperconnectivity will keep employees aware of where fellow workers are, when office supplies are running low, or will link them to a specific location on a manufacturing assembly line that requires instant maintenance.

We will live and work in a world that is hyper-aware of the status of everything around us and that will lead to some fascinating workplace changes that I don’t think we can even yet comprehend.

It is perhaps the third trend that will have the most profound impact. Consider this fact: 10-15 years from now, most baby boomers will have retired or will be set to soon retire. This technology-adverse generation grew up with mainframes, COBOL and MS-DOS, and as a result, never really adapted to a workplace of videoconferencing, video whiteboards and other methods of collaboration.

Conversely, my sons, aged 21 and 23, grew up with the Xbox and PlayStation, Skype and text messages. This generation will soon take over the workforce, and most certainly take advantage of every opportunity to continue to virtualise the world of work. They will use Google Glass-type devices to embed live video into their everyday work routine. Virtual reality will become common enabling them to live and work in a world of massive augmented reality. They will be able to teleport their minds to far-flung locations where their virtual avatar will participate, interact and collaborate with others.

They are going to live in a world of technology acceleration unlike anything we have known, and rather than battling it as older generations have so often done, they will embrace it with open arms and open minds.

Does this all mean that the traditional office of today – a meeting place where individuals gather to share efforts on projects, ideas and opportunities – will disappear? I don’t think so. I believe that we are social creatures, and we crave opportunities for interaction. It will just be a very different form of interaction.

Brace yourself. The future will be here faster than you think.

Jim Carroll is one of the world’s leading futurists, trends and innovation experts, with a client list that includes NASA, The Walt Disney Company, Johnson & Johnson and the Swiss Innovation Forum. Follow him on Twitter @jimcarroll or visit