Article: Want to stay relevant? Learn for a living! 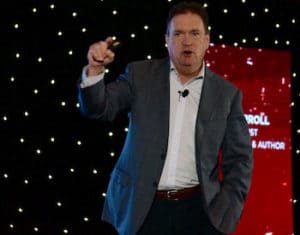 Over on the CPA Success Blog at the Business Learning Institute, there’s a good article on the future of knowledge and careers.

It’s based on a keynote I did for the DigitalNow 2016 conference, in which I spoke to 300 association executives on future trends affecting their organizations.

Change and complexity? We’ve talked about this stuff to death, but nobody has illustrated for us how quickly things are changing quite like Jim Carroll.

The futurist — who also happens to be an accountant — keynoted the 2016 edition of the always-awesome DigitalNow conference in Orlando by scaring the crap out of the association professionals who paid good money to hear him speak.

Consider these nuggets from Carroll:

“We live in a world of acceleration,” Carroll took the DigitalNow crowd. “The future is becoming the present faster than ever.”

“That future,” he added, “belongs to the fast.”

The culprit for much of this complexity? Technology. Moore’s Law marches on … much faster, in fact, than our ability to keep up.

That’s just the changing nature of the world today. And really, for the youngest generations, it’s not complexity at all. It’s just life, and they’ve been raised to roll with the punches.

For the rest of us, things are getting a little crazy.

Carroll says we’ve lost control of the pace of change within our respective industries. That control now lies with the tech geniuses in Silicon Valley.

What we can control is our ability to learn new skills — and to teach our clients what we’ve learned in the process. That might be our new competitive advantage going forward.

“We live in a world of rapid knowledge obsolescence,” Carroll said. “Our job is to deliver just-in-time knowledge to our clients and customers. We must help them confront their new reality and embrace the opportunities it presents.”

Put another way, Carroll quoted American writer Sidney Perelman: “Learning is what most adults will do for a living in the 21st century.”

Put still another way: The most important skill any of us will have going forward is the ability to learn new skills — to outlearn the pace of change, and help our clients do the same.

As I said earlier, Carroll is an accountant, so he speaks a CPA’s language. In a brief interview after his DigitalNow keynote, he tied his thoughts directly to the CPA profession. Here’s what he had to say.