Augmented Reality and the World of Retail…

Earlier this year, I was featured in the UK’s Retail NewsAgent 125th anniversary publication, with a variety of comments on trends that will impact the retail space, such as this quick quote which commented on the integration of Siri, automobiles and the shopping experience. 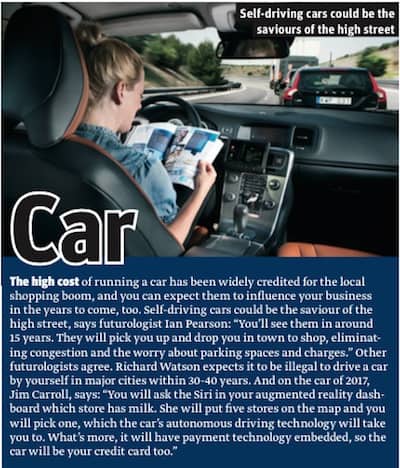 I just came across this additional quote in one of the articles, about the future of in-store interaction and payment.

The pace of change in the world of retail right now is simply staggering!

Two things will be consistently present in nearly every type of retail business, according to Jim Carroll – mobile phones that influence our purchasing decisions and LCD TVs – and there is going to be a distinct link between the two.

“I played out a scenario for the leadership team of Gap in which I had ‘liked’ them on Facebook so had a relationship with them,” he says. “I walk into one of their stores and it will recognise me and run a customised commercial on an in-store TV saying ‘welcome back Jim. We’re giving you a $20-off coupon today and in aisle seven there is something you might like.’”

Mr Carroll believes that the technology currently used by Oakley in snowboarders’ sunglasses – which gives wearers access to Facebook, hill conditions and statistics from their run – will also influence retail in the near future.

“Apple is cutting deals with all the car manufacturers to get Siri in them. By 2017 we will be driving along and you will ask Siri in the augmented reality dashboard which store has X product. She will put five stores on the map and you will pick one, which the car’s autonomous driving technology will take you to. What’s more, you will have payment technology embedded in your car so that will be your credit card too.”

It might sound like a goofy scenario, but it isn’t really. Right now, we’re seeing major cell companies working to cut deals with automotive companies to get SIM-cards into automobiles — partly to support in-vehicle WiFi, but also to support the potential for future payment transactions. And while we see a well publicized failure with augmented reality with the pullback of Google Glass technology, there’s no doubt that there are rapid advances occurring with augmented reality technology.

The other big part of this trend is known as ‘shopper marketing’, an intersection of mobile, location intelligence and social networking technology — the idea being that there are methods of providing for in-store promotional opportunities.

You can read the full version of the Retail Newsagent 125th anniversary article with a variety of observations from various futurists on the future of retail here.