The Miracle that is Greece….

A week ago, I had the delightful opportunity of being the closing keynote speaker for a global conference of family wealth managers that was held at a resort outside Athens. It was a pretty fascinating group …. 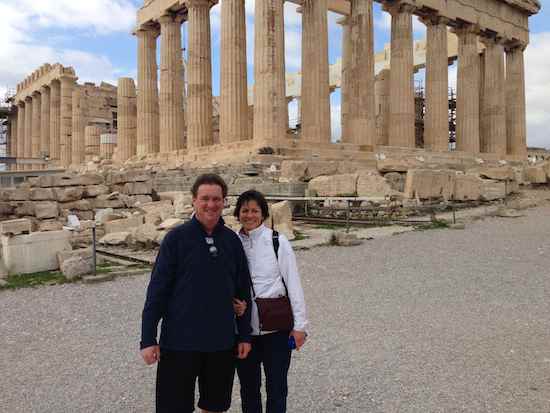 Needless to say, I don’t take on too many international keynotes; the travel can be gruelling, and to do a quality job, you need to ensure you’ve planned in enough time. And in this case, the trip was all the more wonderful because I was able to bring along my wife, Christa. We turned it into a bit of an extended adventure.

We spent 3 days in and around the Athens area (in addition to side trips to Italy and Germany.) And I must say, I came away pretty impressed with what I saw.

I think my expectations of Athens have, in large part, been shaped by international media coverage around the upheaval, protests, riots and political challenges that have occurred through the last several years. Certainly, it is a country that is in the midst of significant turmoil and challenge.

But here is what I saw — the people were genuinely friendly. There was a vibrancy in the tourist areas, the markets, the streets. There were no visible signs of unrest. I kind of liked the place. I was impressed; it did not fit with my expectations of something much worse after the political challenges of the last few years.

On the flight home, I read the slide deck of another presenter at the conference — George Pagoulatos, Professor of European Politics & Economy Athens University of Economics & College of Europe.

And I’m fascinated by what he has summarized, in terms of just how quickly has aligned itself to its new reality:

It is estimated that the country will see the first signs of positive GDP growth in 2014.

These are truly staggering numbers, and a truly astonishing achievement. Granted, it has not come without significant pain to the Greek people. There is a lot of unrest bubbling beneath the surface, as well as political challenges and uncertainty. The rates of unemployment are simply staggering, particularly amongst the youth.

So how will things unfold for Greece from here? It’s hard to say, particularly given the unemployment situation. But what I saw myself, and what I see from George Pagoulatos, convince me that Greece has likely hit bottom, and there’s no where to go up but up.