Category under: 2020 and Beyond, Blog, Faster, How to be innovative, Innovation, Keynotes, Leadership, Major trends, Trends
DAILY
MOTIVATIONAL
INSIGHT
FROM
JIM

(This is a long post. Trust me, it’s worth it, with lots of fascinating photos from magazines in the 1920’s and 1930’s. Credit needs to be given to my wife Christa and son Willie for doing all the scanning and Photoshop work that went on behind the scenes to make this work; it’s not easy to pull this stuff together. Check out my son’s photography company, wcfotography.com. Highly recommended!)

(And for those who ask, yes, I can send you high resolution scans of any of the articles referenced below, within reason).

For the last 20 years, I’ve been in the business of helping to shape how people think about the future. I’ve got some pretty unique clients; thrilling keynotes in front of 7,000 people in Las Vegas and a talk for 25 CEO’s in St. Andrews, Scotland.

But so far, nothing compares to the extraordinary bit of fun I had when I was invited to spend a day speaking and working with some of the top leadership, scientists and researchers at Nasa’s Goddard Space Center. What a day — I knew it would be special when my son Willie and I came through the security checkpoint for a big welcome on the main entrance signboard:

When NASA first approached me to come in and talk about future trends and innovation, I was kind of ‘gobsmacked” to say the least. As I noted in a pre-planning conference call with the group arranging to bring me in, “how could I possibly help them? These are really smart people!” (This was not my first talk for NASA though; I previously spoke to a group of astronauts, mission directors, launch controllers and other folks down in Texas a few years back…)

The answer came to me quickly, however, and provided the context for my talk: the business of space is changing. And it’s changing faster that we or they might think. 5, 10, 15 or 20 years out, it is quite likely that the buisness of space will look nothing like it does today. And so folks at NASA Goddard — and every other legacy space organization, need to innovate, change, and adapt to the new world we find ourselves in.

That would be over-arching theme throughout my keynote. I spent a lot of time going down that path during my talk and subsequent discussion with their team.

But enough of that for now! Let’s talk about how I opened my talk about the future for a group of people who spend their time conceiving, designing, building and hurling very complex objects into deep interplanetary space and near-earth orbit.

How could I grab their attention in the first five minutes? By taking them back to 1920, and the dawn of the space age — and the story of a real innovator in his own time!

I pride myself on the research and customization that I do with my talks. And so unfolds the story of how I opened my talk this June, in front of an absolutely extraordinary group of people. Why not start with where it all began — at the dawn of the era of spaceflight, and the innovation voyage of Robert Goddard himself! And so I took my audience back to the 1920’s and 1930’s. The era in which it seemed that science fiction was just that – science fiction.

And so I began with some relevant stories about the future — by digging out some coverage about the future from magazines such as Popular Mechanix and Popular Science from the 1920’s and 1930’s. (How’s that for research!) (Click on any picture for a full sized image. They are quite extraordinary.)

The storyline I then followed with my audience at NASA took them on a voyage at what people were thinking about at that time. In the 1920’s and 1930’s, the world was automating at a fast pace. Science fiction was everywhere. And with this rapid change came concern that technology and science just might go too far — as found in this particular piece: 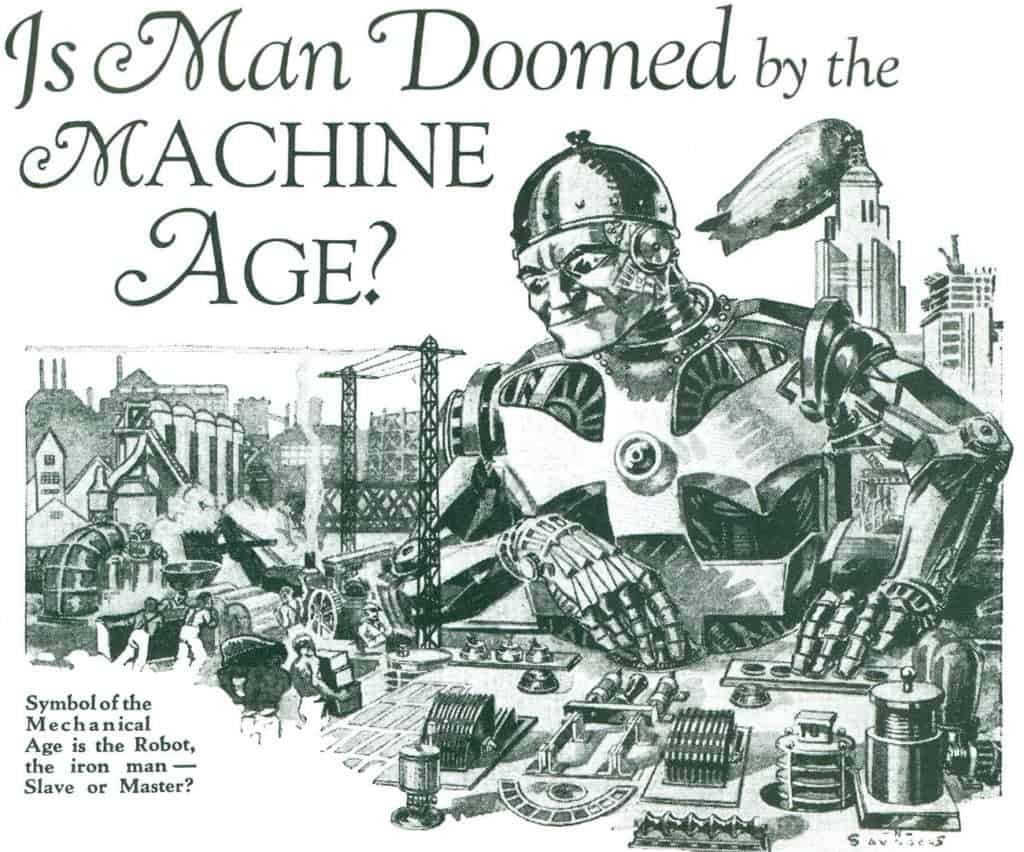 But at the same time, there was a belief that the future, enabled by fascinating scientific and technological developments, would lead to a new era of leisure! We wouldn’t have to work, because machines would do the work on our behalf!(This theme emerged again in the 1960’s with the arrival of computers …… “computers would do all the work for us, leaving us with a 2-day work week!” was the sentiment of that time!) 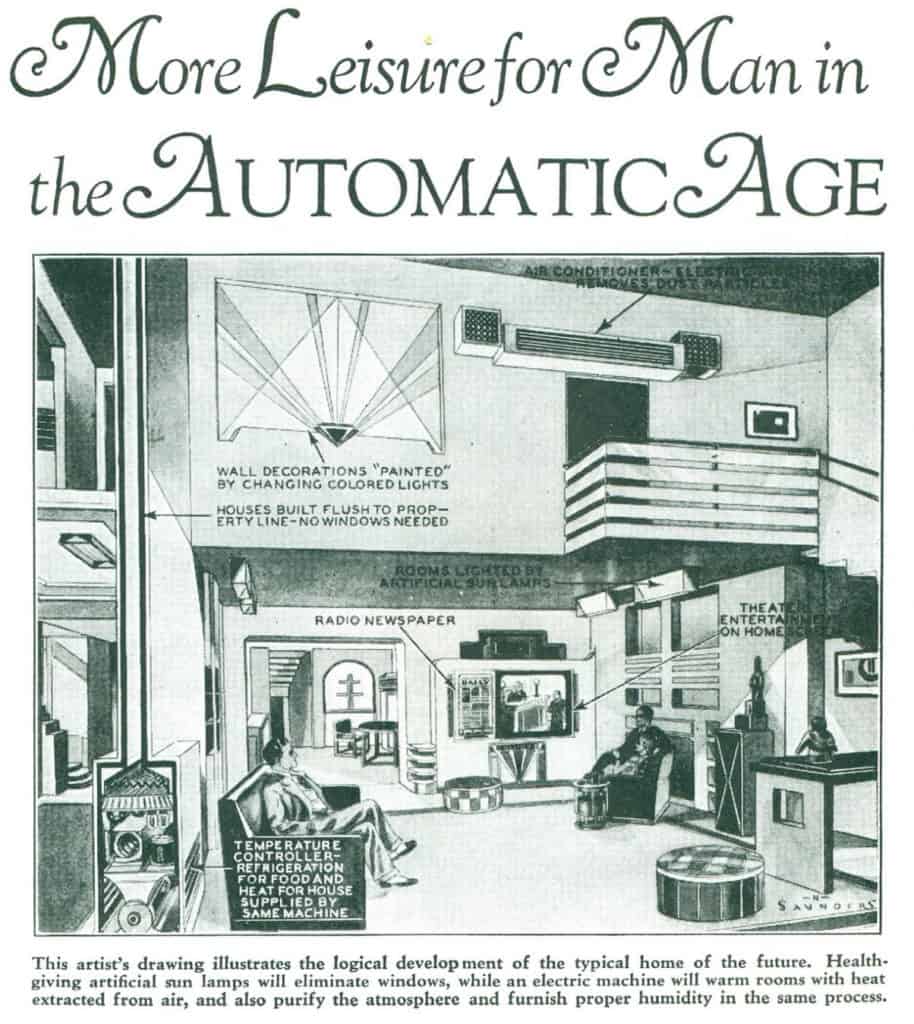 There were fantastic predictions — sometimes wrong, or perhaps not yet realized — such as ‘pulling power from the skies.” 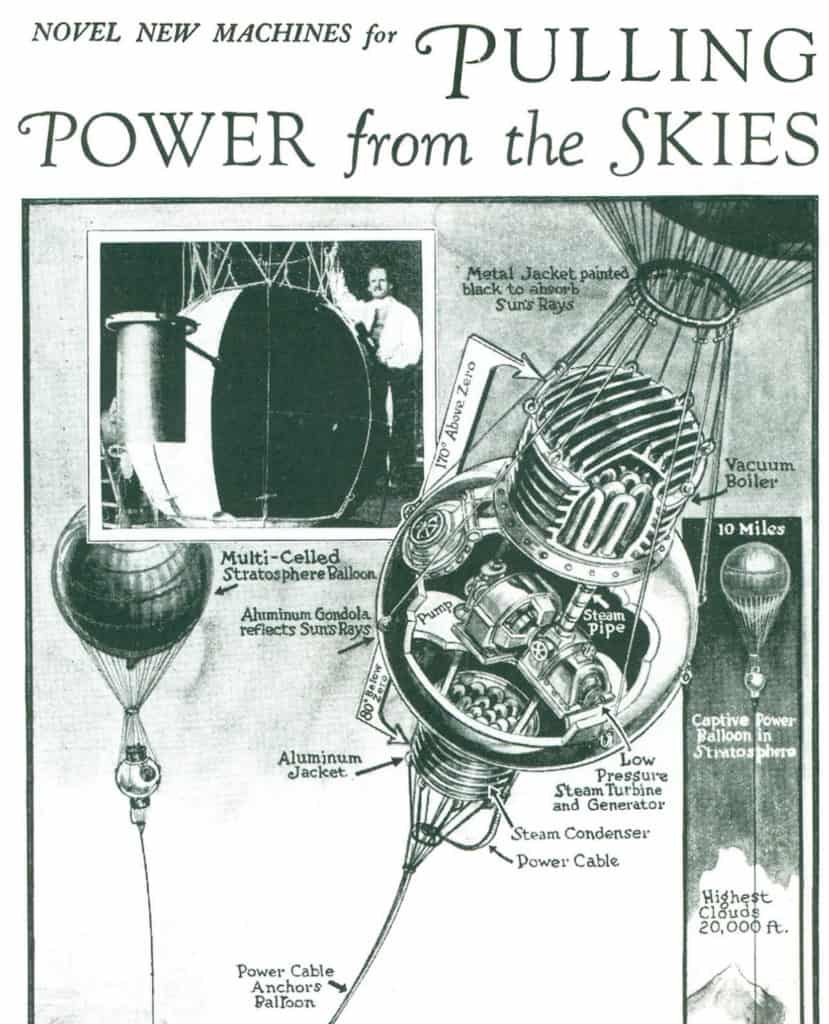 But these magazines about the future were quite often correct; consider their predictions from 80 years ago that foresaw today’s LCD projection screens (“television shown in theatres“), fax machines (“newspapers by radio“) and DVD’s (“home movies from phonograph records.”)

Heck, one of the magazines even predicted the ban on the use of cellphones during flight — “do wild radio waves cause air disasters?”. Check the caption on the picture below at the bottom of the page: 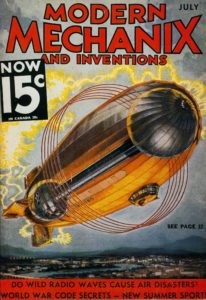 Of course, at the same time that the folks who wrote these glorious publications dreamed big about the future, they quite often veered into the implausible. Perhaps one day “monster insects might rule the world!” At the same that mankind was in awe of the future, there was fear and concern about where it might take us. (Heck is it any different today, 80 years later?) 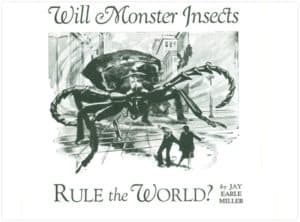 Indeed, there was quite often a thread by skeptics — one article making the proposition that most of what people were talking about in terms of future trends simply would not come true! This particular article focused on the concept of rocketry, and noted a wide variety of  “….scientific objections to fantastic projects such as transporting a human being to Mars….” 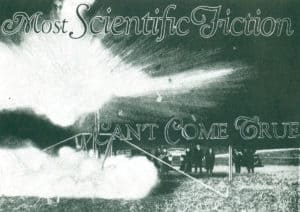 Why the skepticism? Because back in the 1920’s, there were a few lonely visionaries proposing that mankind would be able to leave the bounds of earth and explore beyond. We would see “Daring Rocket Men!” flinging themselves to the heavens! 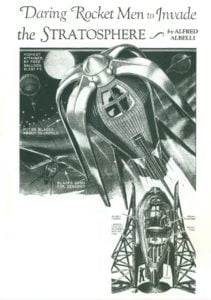 There was belief that this could happen! At one time, Popular Science ran the cover story with humans travelling to space in a rocket-ship! Have a look at the cover again. 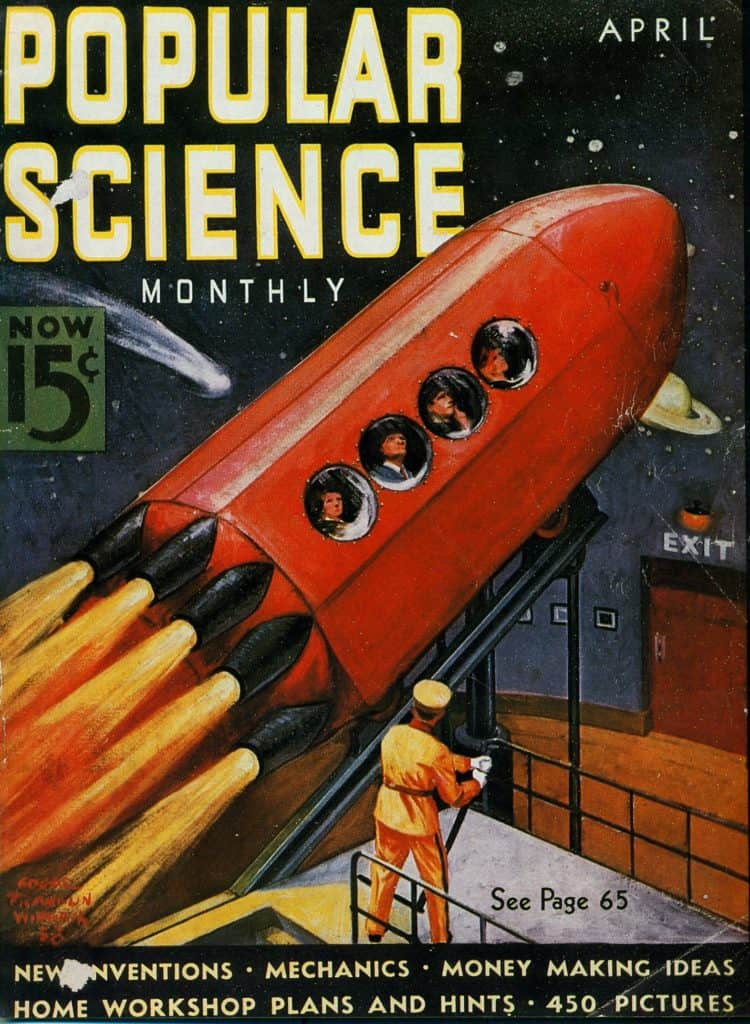 In this issue, a particularly lonely visionary made his case for space exploration based upon rocketry. None other than Robert H. Goddard himself! 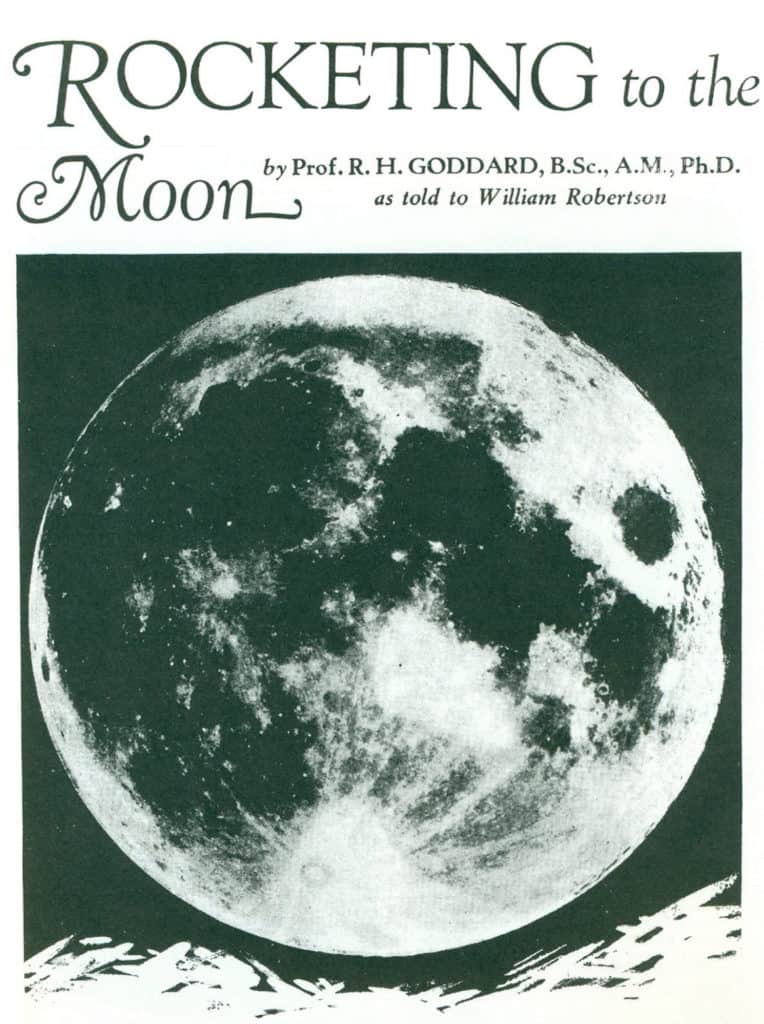 The artwork with the article imagined a future space capsule — with ‘liquid oxygen’, ‘thermos bottle insulation’, ‘rocket openings in the side to steer the car!” 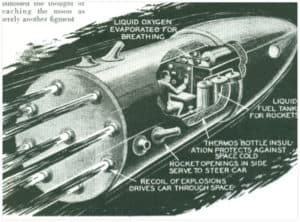 My opening message to NASA Goddard? Robert H. Goddard, the rocketeer for whom the Center is named, was an incredible innovator. He was ahead of his time. As the father of rocketry in the US (with a Russian counterpart Konstantin Tsiolkovskii and German rocketeer Hermann Oberth both pursuing similar ideas at the same time), he was shunned, ridiculed, and portrayed, quite simply, as someone “not of their right mind.“

After all, on January 13, 1920, the New York Times editorialized, in a reaction to a research paper published by Robert Goddard, that  “a rocket will never be able to leave the Earth’s atmosphere.”

My key point? Innovators are often treated with suspicion, derision, taunting. Their role, contribution and value is often misunderstood. It is often not till later that their accomplishments are fully recognized.

In that context, Robert H. Goddard often had to confront these demons, and would often challenge his own thinking; perhaps he was daring too much? In the Rocketing to the Moon article seen above, he commented that “I must confess I should have dismissed the thought of reaching the moon as merely another figment of the imagination of Jules Verne.” Yet as an innovator, he pursued his dreams and passions, as discouraging as it might have been.

Further investigation and experimentation have confirmed the findings of Isaac Newton in the 17th Century and it is now definitely established that a rocket can function in a vacuum as well as in an atmosphere. The Times regrets the error.

Innovators focus. They challenge people. They stick to their belief. They know the value of their work. They dare not fall prey to the pounding drumbeat of negativity from skeptics who often know too little that of which they talk about.

That’s what innovators do!

My keynote continued from there. It was wonderful fun as I began to cover a wide range of trends that might shape the future of space exploration and commercialization. Along the way, I snuck in a few great pictures into my keynote. A key quote from Robert Goddard. A picture of Spock! Canada’s Legoman! Einstein!

Following my talk and discussion around lunch, my son Willie and I were privileged to receive an inside tour of some of the most fascinating research and projects underway at Goddard. 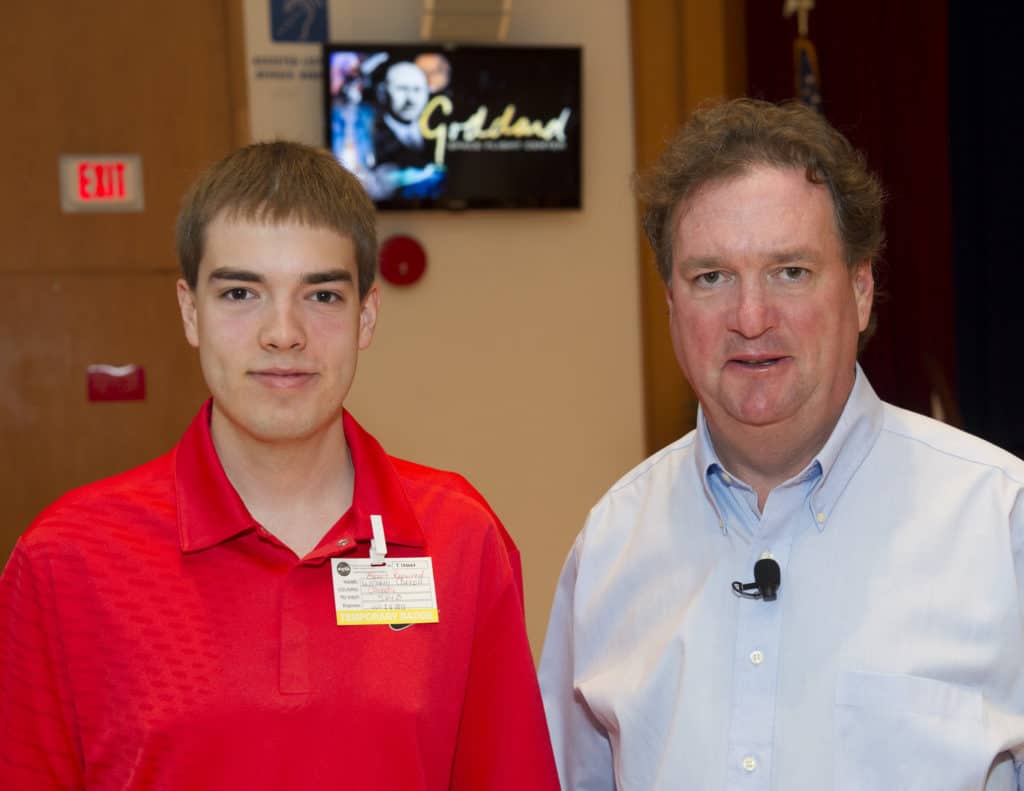 I am blessed to have such a wonderful job!