What the heck are you waiting for?

When you are on stage in front of several hundred people, you’ve got to be prepared to be interactive and open to insight.

That’s why I regularly use a text message polling tool on stage — I can quickly get a sense of what people in the room are thinking about.

Here’s the results from a recent poll – at the start of a talk I asked the audience (in this case, a group of professionals from a national organization) when they thought we might see an economic recovery. Within 2 minutes, I had 218 responses, which probably represented 75% of the audience. 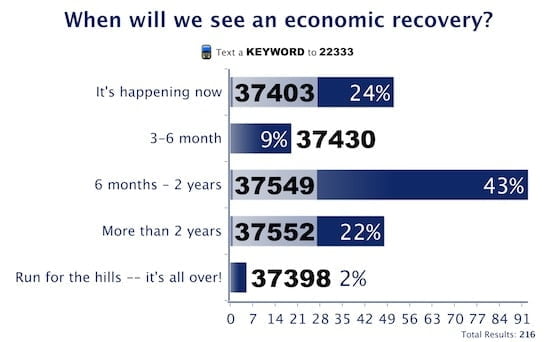 Of course, that gave me the opportunity to lead into a very important observation — if the majority of folks in the room think that economic recovery is still some time off, what are they doing now to prepare for the inevitable economic upturn?

This was a great time to hit them with a key observation by GE’s Chief Innovation Consultant — breakthrough performers manage to accomplish great things because of a decision to focus on innovation right in the middle of an economic challenge — rather than waiting till they came  into a recovery phase.

Noted the GE head of innovation: it was explicitly “…because of choices they made in the recession..”

So it really comes down to this: when do you innovate? Are you going to wait until you are comfortable that we’re in a sustained period of economic recovery? Bad decision — because economic volatility is the new normal. Everything we have learned from past recessions has taught us that the winners were those who decided that it was an important thing to keep moving ahead despite massive amounts of uncertainty.

When do you innovate?

I captured this sentiment on stage in Las Vegas some time back. Maybe it’s worth a watch. Ask yourself the question, and look around at what you are doing right now to prepare for the future. Are you in an innovation frame of mind right now? 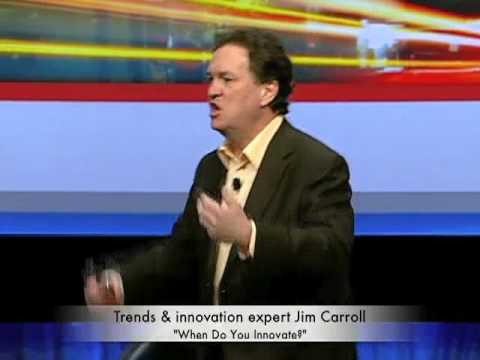