“You can’t be a futurist and a pessimist!” 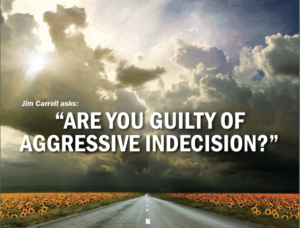 Yesterday I spoke to several thousand people as the closing keynote speaker for the 2010 Fresh Summit for the Produce Marketing Association in Orlando. I focused on several issues, including the rapid changes occurring in the world of retail and consumer change.

But in addition, my message included insight into how innovative people focus on opportunity, not threat; on growth, not fear. It’s an important message right now, given the continued economic volatility.

Coincident with my keynote, the Produce Marketing Association published an article in Fresh magazine.

Are you guilty of aggressive indecision?

How many times in the past two years have you heard this sentiment: We’re not going to pursue that opportunity right now due to the current business climate? Jim Carroll calls this mindset aggressive indecision, and believes it is a trap that all too regularly blocks progress and ensnares opportunity.

Jim Carroll considers this most recent recession the fifth downturn he’s experienced, a sentiment that suggests he is a seasoned Boomer who has been around long enough to pos- sess a decent perspective on the cyclical nature of markets. And, while he acknowledges that every downturn has had its challenges, he reminds us that each has also been followed by a recovery.

But rather than simply saying to look on the bright side, Jim points to what he calls Long-term Transformative Trends. “These are the big issues that will impact our lives 15 years down the road,” he outlines. He invites us to calm our fears, to step back from the precipice, and take a look at what these big changes mean and the opportunities they present.

“I can’t be a futurist and be a pessimist,” states Carroll. “When I look ahead, I see nothing but opportunity. We are constantly witnessing the birth of new industries, new jobs, new careers. These transformative trends represent huge potential.”

So just what are some of these transformative trends? Carroll covers five here:

Healthcare: With an increased focus on healthy lifestyles, a greater emphasis will be placed on managing diet by in- creasing the use of fruits and vegetables. This represents enormous opportunities for the produce industry to create innovative ways to differentiate and market existing products and come up with new varieties and packaging solutions.

Demographics: Ethnicities will represent a larger percentage of the population, which will result in different demands. Carroll tells the story of two farmers, one of whom continued to plant the same crops year after year, even though he was losing money. The other one saw that there were more ethnic groups demanding more egg- plant, so he switched his crops to eggplant, resulting in his unprecedented prosperity.

Ethical Packaging: There will continue to be a push to create more efficient packaging that has less impact on the environment. Wal-Mart has set a goal date of 2015 to be completely envi- ronmentally friendly in its packaging. Other companies are following suit.

Retailer/Consumer Relationships: Citing companies such as Apple and Trader Joe’s, Carroll notes that the retail landscape is changing in terms of brand loyalty and customer relationship. As social media infiltrates our culture, mobile technologies with apps that generate electronic coupons will influence pur- chasing decisions, as will greater in-store promotions.

“Twenty years from now, we [Boomers] will have less of an impact on what happens in the world,” admits Carroll. “If we can acknowledge that the world is changing, step away from the fear, and make the decision to adapt,” he believes that the opportunities are virtually limitless