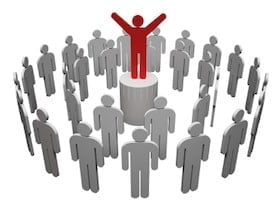 My news tracker picked up this small interview that appeared in Food Processing Magazine a few months ago.

In a tough economy like this, it’s time to hold the line on spending and to be especially cautious of leading-edge technology. Right?

History’s full of companies that leapt ahead of competitors by increasing spending, especially on innovation, during down times. Jim Carroll, author and innovation consultant, recalled a speaking engagement in which he followed the CEO of a global restaurant chain, who spoke for a brief but powerful 20 minutes.

“For the first minute, he spoke about the global economy and the meltdown. He then spent the next 19 minutes identifying eight growth opportunities and how this organization could do great things if they relentlessly obsessed over them.

“How cool is that?” asks Carroll. “All these other companies are retrenching, pulling back, and here’s a guy who’s saying to his team, ‘Let’s focus on growth.’ ”

He says growth plans and strategic if judicious spending is mandatory for managing during a downturn. Companies that aren’t paralyzed by total spending freezes can get the jump on those competitors who are. And when the economy is back on track a year or whatever from now, Carroll says only then will we be able to point to companies and say which ones lagged and failed and which ones “took risks and did great things.”