“Competing with analytics” – “the next billion dollar industry” 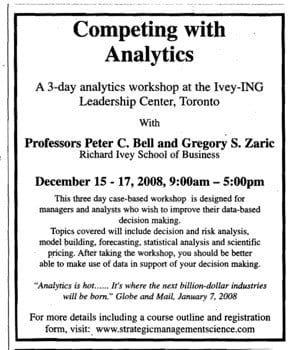 Last November, I released my “What Comes Next” trends perspective, outlining some of the significant trends that I believed would have the most impact in our longer term future. It’s still worth a read, and I don’t think the economic turmoil has changed anything written there.

So I admit I was surprised, given the massive quantity of doom-and-gloom thinking which is smothering creativity everywhere, when I came across this advertisement, offering a 3-day executive level course on ‘Competing with Analytics.” And right there, they’ve quoted my “What Comes Next” document, which was re-printed in Toronto, Canada’s Globe and Mail earlier in January of this year: “Analytics is hot….it’s where the next-billion dollar industries will be born.”

I don’t disagree with that assessment, and neither does IBM CEO Sam Palmisano.

As quoted widely, and from an article in eWeek, in early November he made a speech in which he “called on the next administration to invest more money in refurbishing the electronic grid system to reduce the amount of energy required to power it, make better use of information technology to reinvent the way healthcare is provided and green technology investments that would enhance traffic and mass transit systems to make everybody who depends on these systems more efficient.”

Which, if you study it, revolves around analytics, linked to infrastructure. Where’s the growth? We all know where it is!

Obviously Sam is a bit self-serving with his call to action, but the truth is IBM is one of many companies that is at the forefront of smart infrastructure development.

There’s lots of growth out there. Innovators stay focused on opportunity, the future, and educating themselves on the trends that are going to have real impact in the future. Ten years back, you’ll look at this advertisement and think — “man, those guys were on to something.”

I think I’ll write the folks running the 3-day course and see if they will give me a complimentary admission. (-;