“It’s lonely being a visionary”

While cleaning up the office today, I came across a book that I contributed the Foreword to a few years back. The book was “e-Work Architect: How HR Leads the Way Using the Internet.” The foreword still makes for interesting reading today. [ link to the book ]

Foreword for “e-Work Architect: How HR Leads the Way Using the Internet“ 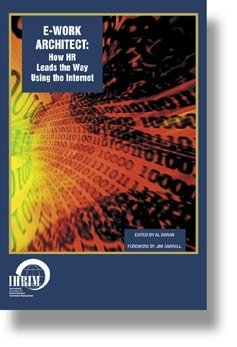 Back in 1987, I was busy working within the world’s largest international accounting firm. I spent my time with senior executives of the firm around the world, trying to convince them that we should be investing in technology systems that would let us capture and harness the human assets of the firm.
Knowledge was paramount, I was pleading, and we should be ensuring that we implement technologies that would help us harness and grab this intellectual capital before it was lost. If we could do that, I suggested, we would be able to better serve our clients, and increase our bottom line.

The fact was, I was talking about e-mail, knowledge management, and the Internet, some ten years or so before they became mainstream.

And you know what? It’s lonely being a visionary.

By 1990, the firm finally admitted to me that they didn’t understand what I was doing, what I was talking about, and what I was suggesting. It was said to me, in rather diplomatic terms, that I’d probably never make it to partnership. Not only that, but the professional body of which I was a member also seemed to be sending signals that a guy like me was on the wrong track, and that I’d better come back to my senses.

Tired of swimming against the tide, I quit the company, established my own consulting firm, and began writing.

Fast-forward ten years to the year 2000. By that point, I’d established an international reputation as a keynote speaker and seminar leader, had authored some 30 books , and was a busy media personality. Some called me a “guru,” while I just kept referring to myself as a nice guy.

And in a time of sweet vindication, my old firm called me back, asking me to to provide a keynote address for their annual partner’s conference. They wanted me to explain the future to them ; they were now prepared to listen. Knowledge management? Intellectual capital? The things I was talking about ten years before were now mainstream.

The profession of which I am a member? They had come full circle — in 2000 they honored me by naming me an FCA – a Fellow Chartered Accountant. To put that distinction into perspective, only 90 of 33,000 accountants were honored that year, meaning that I am one of a unique group considered to be a leader among my peers.

My, how times change.

There is invaluable lesson in all of this: as we careen towards a future that is full of surprises, all of us would do well to keep an open mind.

As you will see in this book, there are many who believe that there will be dramatic change to the workplace, the nature of the organization, and the very essence of a job and career. Technology, the wired world, the Internet – we are in the midst of a period of time that is probably going to see the greatest change to have ever occurred.

And there are a lot of lonely visionaries out there.

They’re working in their own specialties, their own areas of concentration, their own technology systems that they will believe will shape the world. And often, they are ignored. Battered and bruised. Advised they are on the wrong track. Told in no uncertain terms that they are, well, not quite with it.

What a dangerous state of affairs we place ourselves in, when we don’t listen to those who dare to predict where our future might take us! It is a sad fact that it is a natural human trait to dismiss those who are brave enough to think about how our future might unfold.

And it is dangerous, for so many of us can miss the boat by not having an open mind. Ask yourself this question: ten years ago, were you thinking that something like the Internet would exist? Did you think that companies would actually have difficulty recruiting and retaining hi-tech staff? Did you think that e-biz would come to reshape the economy? Had you considered how much outsourcing t might occur in the economy, fuelled by the connectivity of the wired world?

No? Well, then, you weren’t listening.

You have to listen – and you must have an open mind. Yet far too many HR executives are overwhelmed by the rate of technological change around them, and can all too often become complacent about its potential to wreak havoc on their business organizations.

That’s why 21 Tomorrow’s is such an important book – for it will help you to realize that complacency towards change is no longer an option – in fact, it is a death sentence.

It was physicist Neils Bohr who once stated that “prediction is difficult, especially when it involves the future.” Yes, it might be difficult, but it needs to be done, and you need to listen.