Daily Inspiration: “Volatility, uncertainty, complexity, ambiguity. This is your reality. Deal with it. Keep innovating!”

“Volatility, uncertainty, complexity, ambiguity. This is your reality. Deal with it. Keep innovating!” – Futurist Jim Carroll 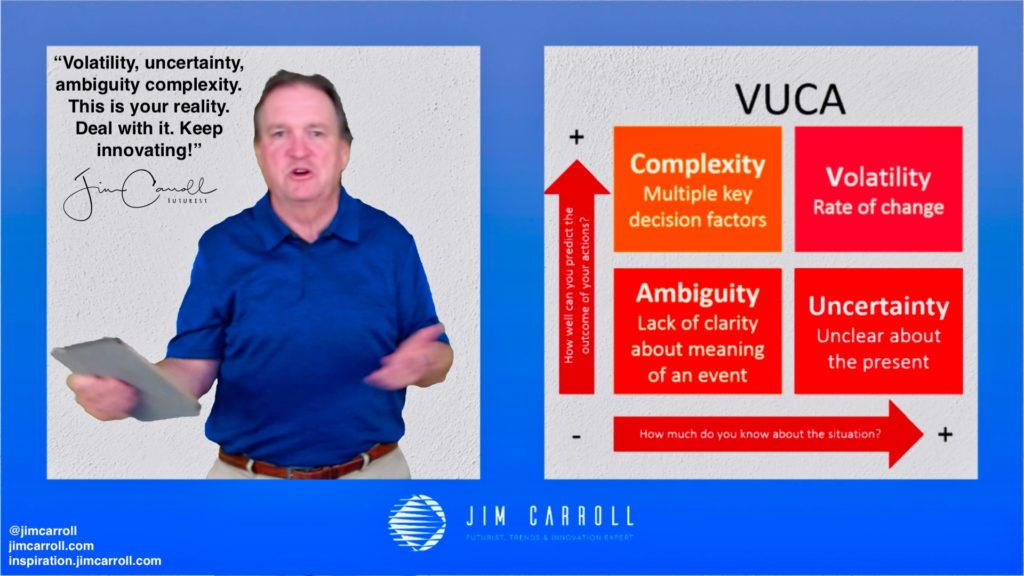 A clip from my ‘show’ yesterday and my online ‘broadcast’ with Australia the other night. The picture is fuzzy – my original camera was not up to snuff, but I received a new device post-broadcast which lets me upgrade that a bit more! I’m on a quest to continually ramp up the sophistication and quality of my studio.

VUCA – volatility, uncertainty, complexity, ambiguity – defines your future. It’s a leadership concept that has been around for quite some time, but has taken on new relevance and meaning in these current challenging times.

It’s the context in which you need to move your company forward, inspire your team to action, and accelerate yourself into the unknown. And unfortunately, despite the desire by many to return to the ‘olden days’ – i.e. February – that world is not coming back any time soon. People are delusional thinking that all we need to do is ‘flip a switch’ and the economy re-opens.

I’m a realist – this is a 1 year, 2 year, 5 year voyage, if not longer. The global economy is in the midst of sweeping and wrenching change, and NOTHING will ever be the same. Some companies, leaders, people and countries will do well in reinventing themselves for a new state of normal. Others, who think that freedom comes at the end of the barrel of a gun and flouting the personal safety of their fellow citizens, are already showing themselves lacking the maturity and capability to invent the dramatic new opportunities of the future.

Watch carefully the leaders who align to the VUCA mindset, the reality of what it represents, and innovate within it. They are the ones who will emerge the winners as we come through this unique period of history. They’ll present the grand visions, the bold ideas, the sweeping concepts, that historians will come to judge as the actions that propelled those around them into a new and opportunistic future.