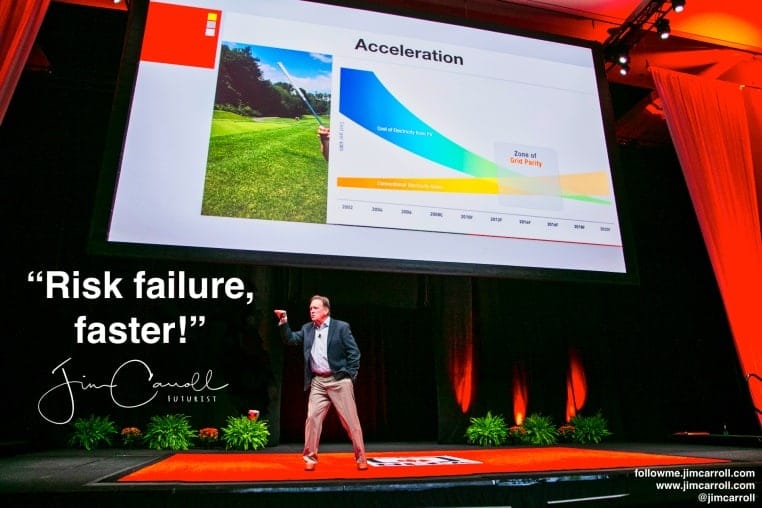 I’ve got one more week of summer before I get back on the road, with a whole series of exciting keynotes for the fall. It’s been a summer of golf! And I started the season, scared of my driver! As a late-in-life starter, I have, like many, a slice, caused by bad swing mechanics. It’s a challenge to fix, and so for much of the summer, I managed the problem by avoiding it. Until I decided it was time to deal with realty. I was fitted for a new driver about 2 weeks ago, and it should arrive any day. It’s built for my swing, with the idea that we should build some comfort with the process before building a path to fix the problem. I’m good with that. While waiting for it to arrive, I’ve been working with a similar demo driver. I’ve been forcing myself to use it in cases where I might not – where there is trouble on the right, or some ‘liquid fairway’,’ or a narrowing of the course arteries. I’ve been willing to risk my overall game in order to build some comfort with the overall plan.
And you know what? It’s working! My fairway accuracy is hovering between 65 and 85 per cent! The driver is shaped a bit for my swing and in effect, I’m playing with my new ‘straight slice.’ It’s sort of like the arrival of parabolic skis 30 years ago – let’s make it easier for the new comer to take part in this fabulous sport.
I think sometimes, our fear of failure can outweigh our need to change. That’s my lesson from my experience with my driver anxiety, and I’m pretty sure this will become another powerful story I will use on stage in the coming months.

A room full of healthcare care insurers, looking for insight into what comes next in the healthcare sector from a scientific, medical science, and medical device connectivity perspective. I took them on a tour of my Healthcare 2025 keynote, and how we are transitioning into a world of massive transformation in the concept of ‘care.’ 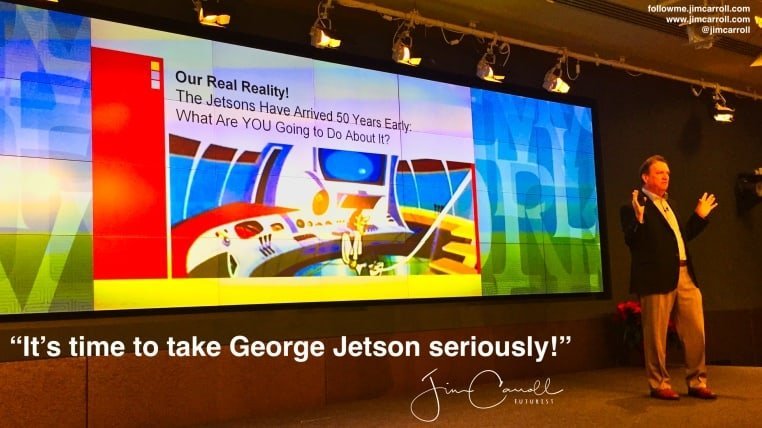 The world has never seen a pace of change as fast as the one that we live in now. If you go back and watch The Jetsons and look at a lot of the things they were talking about in the science-fiction cartoon show, many of these things have become real today.  And that’s the new reality of our world today. The period of time between when science-fiction predictions are made and when they become reality is collapsing! Heck, even Star Trek has become real – on stage, I’ll often take a medical tri-corder out of my pocket, put it to my head, and read my blood pressure, live, in real time. (Yes, I have such a device!) Our world today is so fast that what seemed to be crazy yesterday is suddenly real today. It’s only going to become faster – because we now live in the era of acceleration. The real impact of technology is that speeds up the pace of change, and that is the underlying trend in every single industry.
The key question for you is : what are you doing to align yourself to, and take advantage of, these fast paced trends?
It’s a big decision, because as I will often point out on stage, while we are headed into the world of the Jetsons, there are an awful lot of Flintstones about!

“If the future belongs to those who are fast – then small beats big!” – Futurist  Jim Carroll 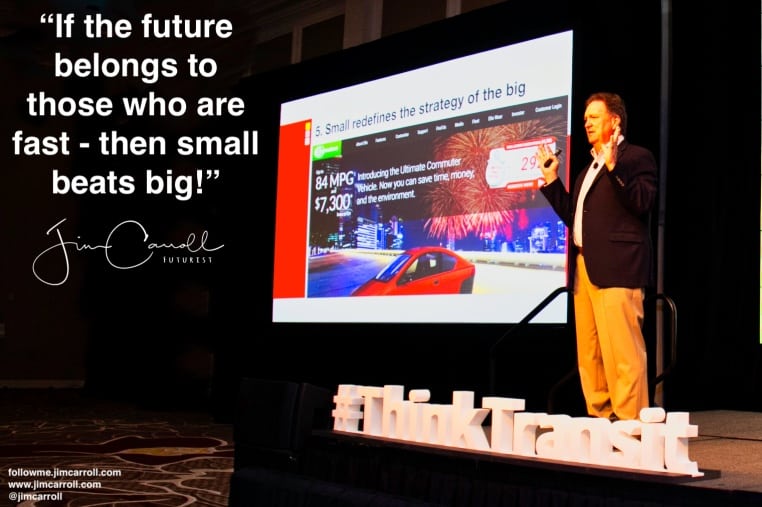 “Really? My mind boggles at your disbelief!” – #Futurist Jim Carroll 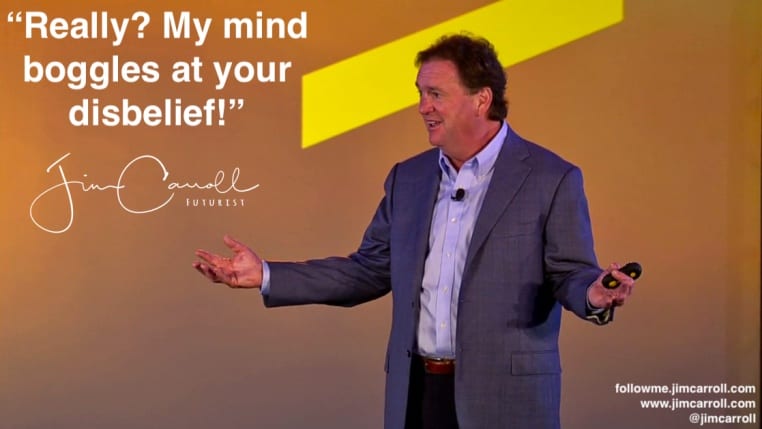 With their belief, for example, that their business model, the products they sell, the customers they work with, and the speed of change in the industry in which their company operates will remain the same going forward.

Or their belief that the skills they developed yesterday, and which they are struggling with today, might be of any relevance tomorrow.

Or their belief that if they just wish the future would be the same as the past, that it will be.

Or their belief that that the dude actually knows what he is doing. (Hint – he doesn’t. He’s an idiot.) My mind boggles at the complacency and attitudes of some people. Believe what you want to believe, but I do know that the future will be extremely different than yesterday. That’s a fact you can believe in

In December, I’ll keynote the DTN/Progressive Farmer Ag Summit in Chicago, with a look at the future of this sector.

I recently filmed two pre-event videos to give attendees a sneak peak. The agricultural sector has achieved much through constant innovation – but there is much more yet to come! Check out the statistics in this first video, and then expand your mind with the opportunities! For this particular video, I did some filming in the field. Literally!

In this second, shorter preview video, I start out with ‘3 fun facts’ that you might not know about agriculture. Check it out!

Learn more about these pre-event videos here. These are proving to be a great hit with clients!