“Find out what makes you different. Do more of it!” – Futurist  Jim Carroll 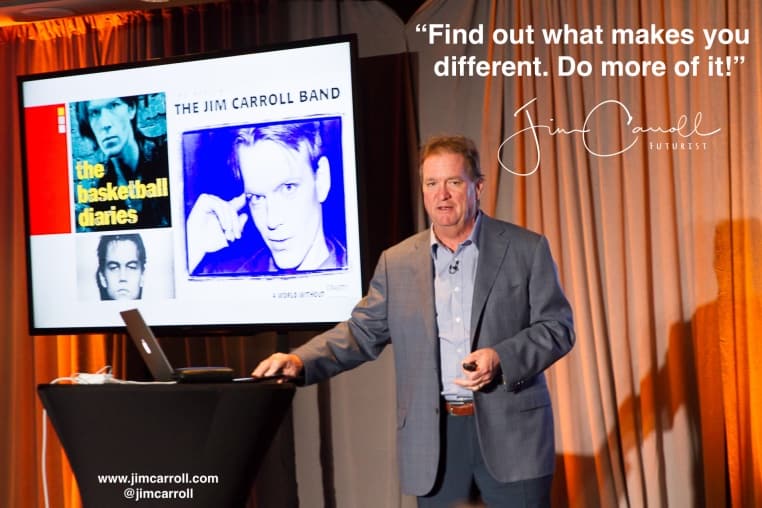 Innovation comes from individuality; your creativity comes from not conforming. If you are different from other people, don’t worry about it – celebrate it!

That was my thought this morning, and I went off in search of a picture to fit the idea. While doing so, I came across this photo from an event I did in St. Louis last year — where, at the start, I explained to my audience that I was “not that Jim Carroll!” The picture seems to fit the theme!

Here’s the thing: oftentimes when I go to the MidWest, I need to explain to the audience that I’m not ‘the other Jim Carroll” – they might have Googled him. For close to 20 years, I have had a need to explain – for a time, I even had a “I’m not that Jim Carroll” page on my Web site, explaining. To this day, I still get visitors looking for Jim.

Jim Carroll was a New York City poet, author, punk rock singer with his namesake band, which included the iconic punk rock anthem, “People Who Died,” which today is a mainstay for people in the pain of loss.

Jim was also an addict. His book, The Basketball Diaries, captures the raw terror, pain and hopelessness of his addiction, but also the beauty in his difficult pathway to recovery.

Jim Carroll’s book became a movie of the same name, starring a young Leonardo Dicaprio. When the movie was released, I would often receive emails from young girls, who seem to have figured that I would be a pathway to get a message to Leonardo. I found it necessary to explain that I was not ‘that Jim Carroll.’ And his recovery from addiction was, and is to this day, an inspiration to those who struggle. I still get email from people in the midst of their own terror, who have read his book, and who think I am him. I explain I am not – but I respond carefully, knowing that my words have meaning.

Sadly, Jim died in 2009. I met him briefly once in Toronto. His story remains a powerful inspiration to me to this day.

The story of Jim has nothing to do really, with the quote – but certainly the pictures fit the concept of the idea! Be different!

“The speed of your future is now determined by those who are faster than you!” – Futurist  Jim Carroll

What a night as I did a *late* dinner talk in San Francisco last night at the DeYoung Museum – with one of the most fascinating AV screens I’ve ever had!
Late, because I didn’t get on stage till 85pm — 1145pm Toronto time, my home town. Exhilarating because of the stage setup. Wonderful because of the way my message fed into the overall theme of the event.
If you can pull off a great keynote late at night with a crowd of folks who’d been having a lot of fun for the previous two hours in their pre-dinner reception – you must have a message that resonates.
And resonate it did! In the room were CEO’s and senior executives of companies in the financial, construction and infrastructure sector from around the world – there was probably several hundreds of billions of equity represented in the room.
My message on the acceleration of trends – #3dprinting #selfdrivingcars #virtualreality#internetofthings #iot – and a message around #disruption and #transformation – was designed to put into perspective that in the era of acceleration, speed – not history – becomes the defining success factor for going forward.
The key issue – that very issue of speed is accelerating because of tech companies in that very region, and south to Silicon Valley – are now controlling the speed of change as every industry comes a technology industry. It’s only going to become faster folks, good or bad.
What are you going to do today to deal with the world of the fast?

“When there are no words, don’t struggle to find any….” – Futurist  Jim Carroll

I live in a city which is part of Toronto, Canada. From 1985 to 1989, I had an office in a tower which is at the heart of the carnage in Toronto yesterday. Those streets were my neighbourhood pubs, grocery stores, shops and more. I spent my life on those streets for 4 years. I know them well.
There are no words.
And with that, God bless Canada, and my heart goes out to the survivors of those who were tragically killed in this senseless incident.
Canadians are Canadians. They will come together as a nation and will find the words that will guide them through the coming days.

What do you do when you have a room full of Pepsi and Coors distributors, and are asked to challenge them on the future? You put into perspective the changes occurring in the world of retail, consumer behaviour, product development, and more. 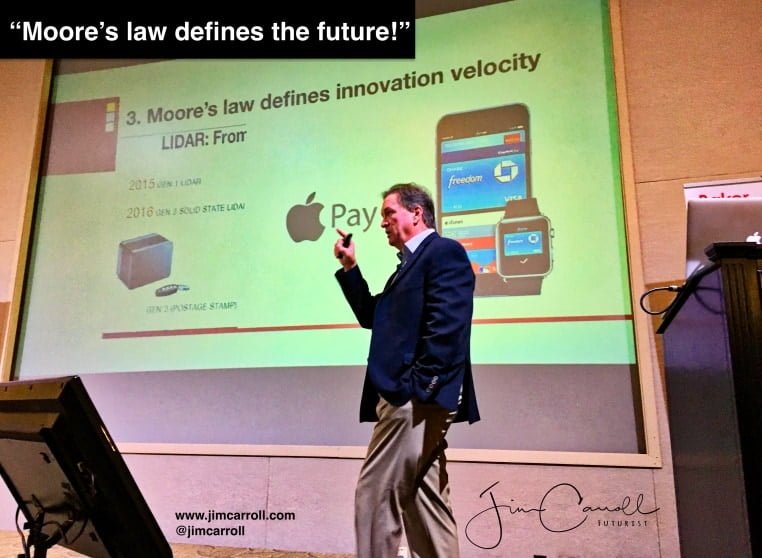 Such as, the collapse of attention spans! This sector is also being “Amazon’d” as an increasing number of consumers take to shopping online – Amazon has over 100 million Amazon Prime member. And so while we live in an era in which know-nothing politicians rail against the future, savvy organizations are working hard to align themselves to the trends. Read more in my specific Amazon keynote topic, and take a look at the customized pre-event video  (“The Future of Retail? It’s Fast“) I filmed for Admiral Beverage.

“I can’t tell you what to do; I can only inspire you to do it!” – Futurist  Jim Carroll 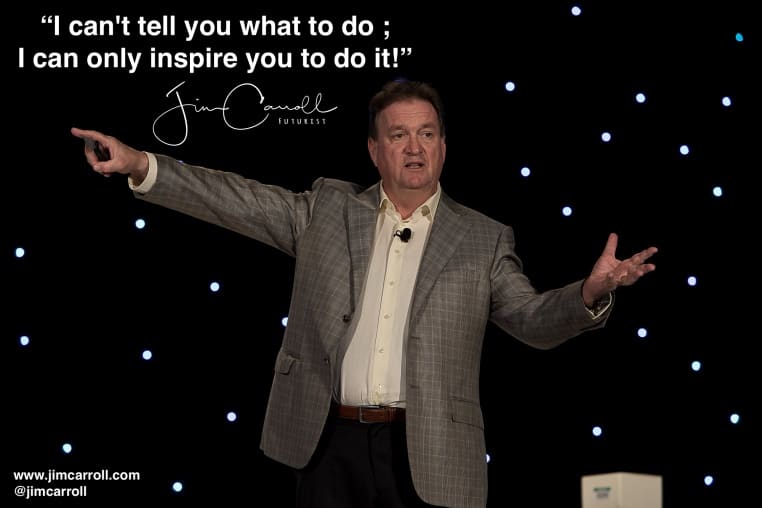 Many people are often looking for magic solutions; there aren’t any. There is only insight; from that comes innovation!

Rural communities need broadband access, and this organization is working to provide it throughout this Canadian province.

In was brought in to speak to their annual general meeting, speaking to Board Members about the trends which are increasing the need for rural broadband access – such as the agricultural trends that I spoke about to Purina for months earlier. Agriculture is increasingly all about data and connectivity, and a region will fall behind if it does not have the infrastructure to support the rapid evolution of the industries upon which economic growth depends.

It was a bit like an economic development talk, and I have a detailed post on those ideas, 20 Big Rules for Economic Development in the Era of Acceleration.