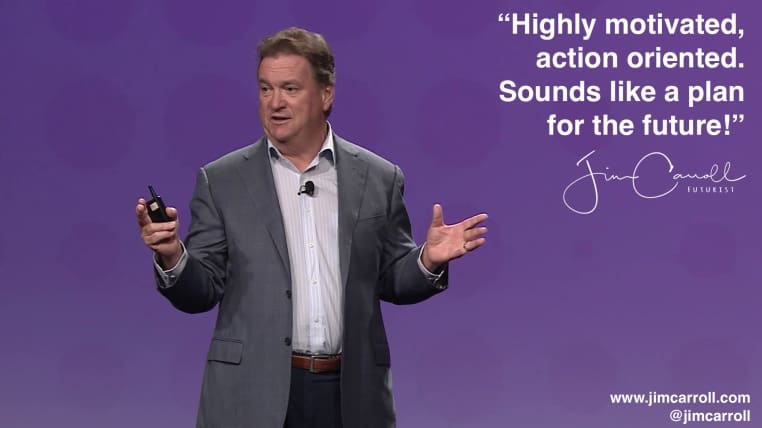 Gore Mutual is a property and casualty insurance company located in Canada, and they are running a full day session to help their broker understand and deal with the fast pace of change.

I’m thrilled to be a part of the day, and will share the stage with well known Canadian environmentalist David Suzuki, and Canadian astronaut Chris Hadfield! 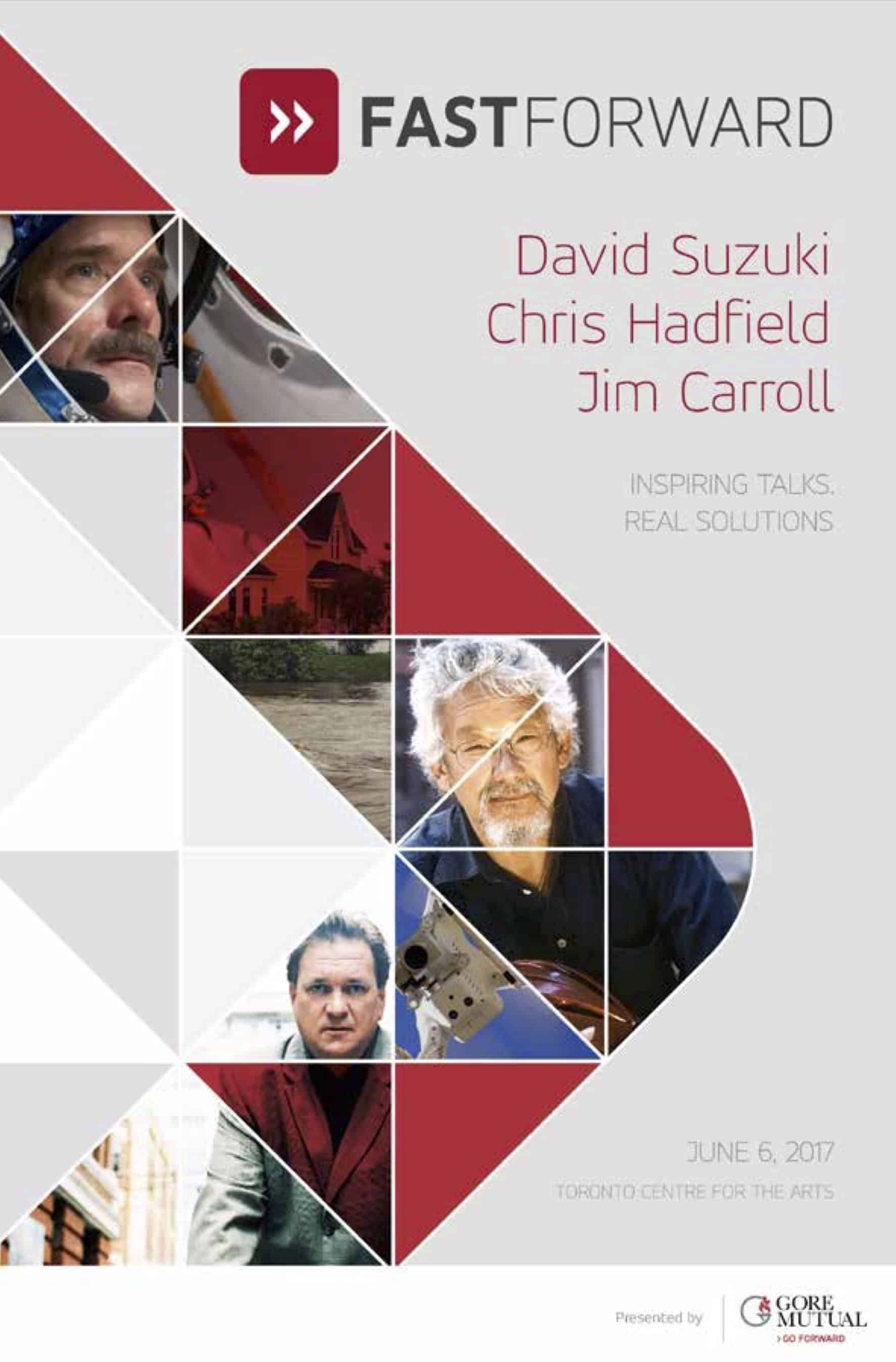 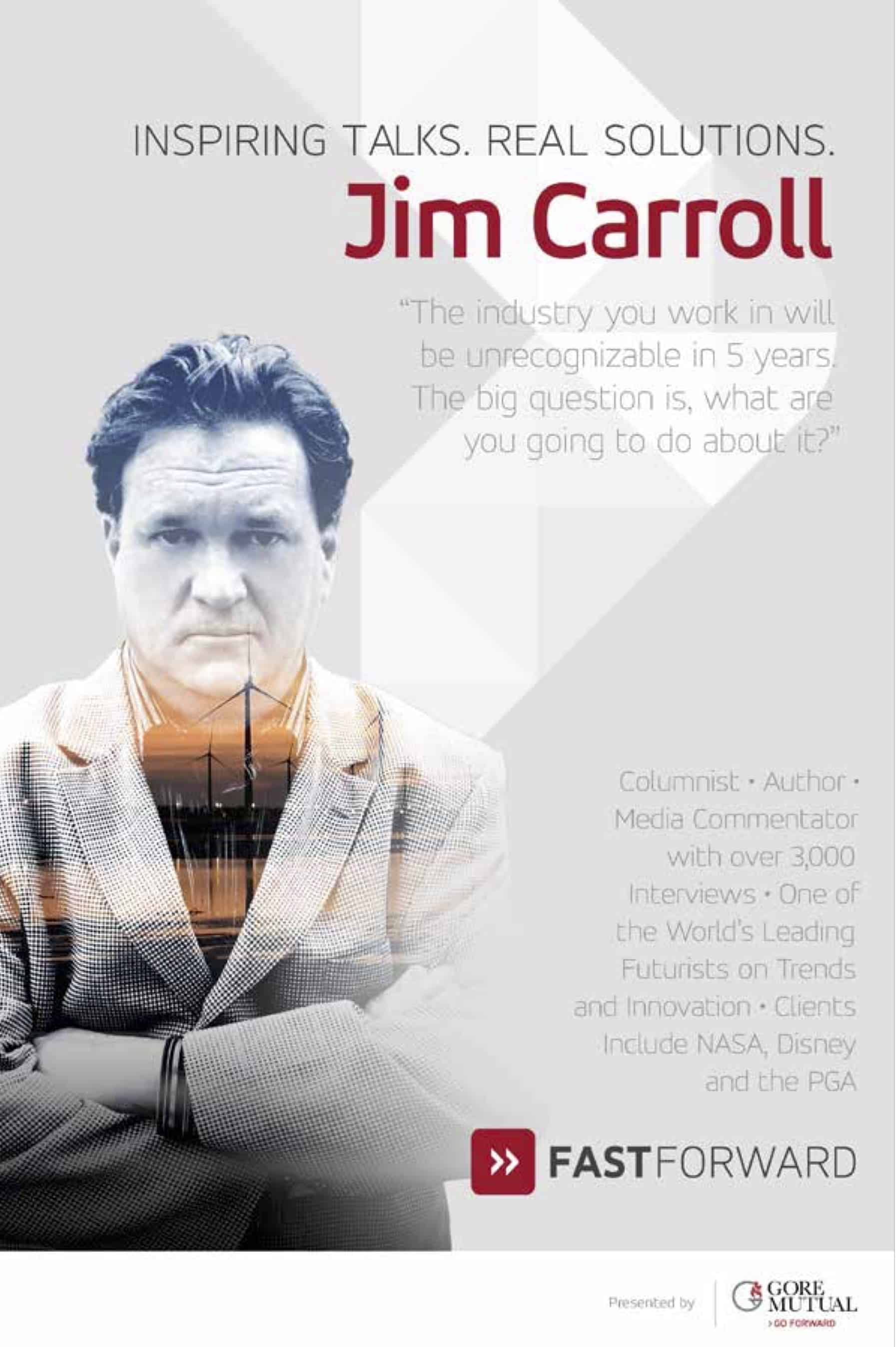 I love ‘small world’ connections, and here’s what’s fun about this event:

This is going to be a great event, and I look forward to sharing the stage with two iconic thought leaders.

“Judge your success by the things you have done. But challenge yourself with the things that you haven’t!” – Futurist Jim Carroll 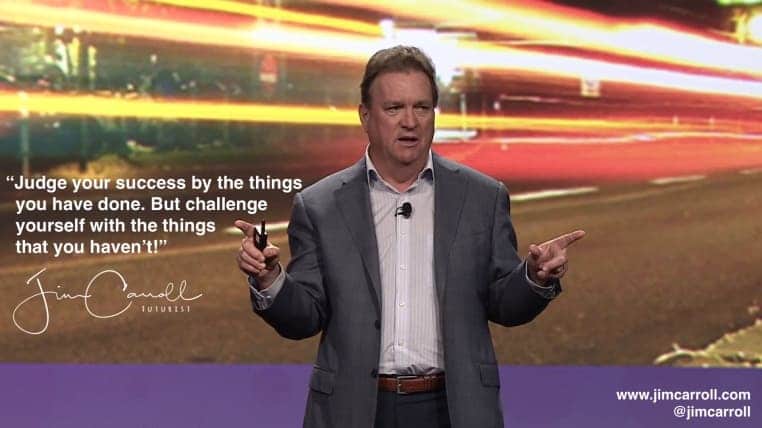 I spend a huge amount of my time dealing with senior executives in global companies; just hit my client list for a sense of what I do. This usually involves a lot of conversations with CEO’s of Fortune 1000’s, startups, and other C-suite executives. 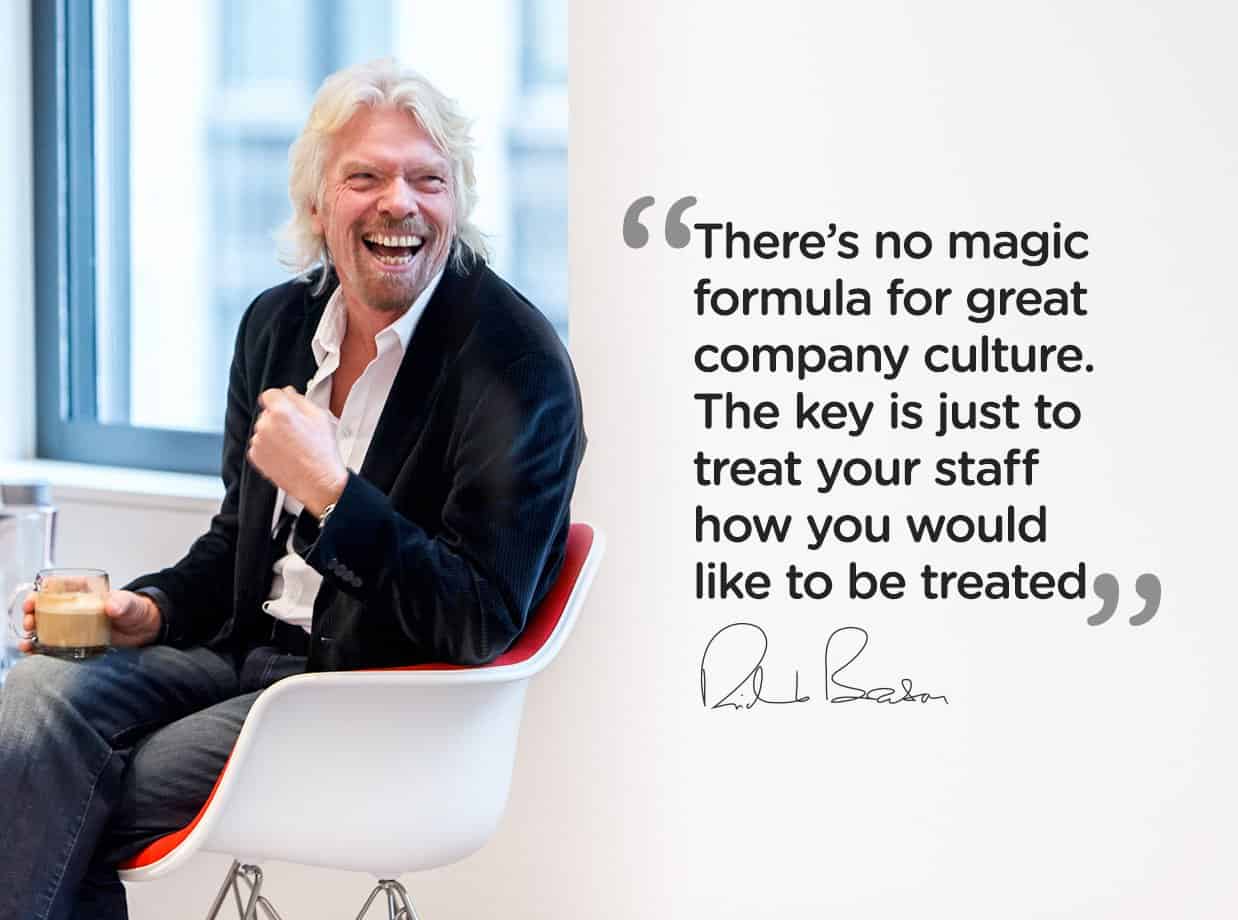 That’s a good message for a CEO to promise. Treat people as you would like to be treated.

Sir Richard, maybe you should make sure your staff treats potential business partners with the same degree of respect. Just a thought…..

As a global expert on trends and innovation, I often see the dichotomy between the promise of a brand and the reality. So here’s a story for you to ponder. Is the promise above real?

Maybe not, from a recent experience of mine. Listen in: it’s not much a story, but I  find it interesting and want to get this off my chest…. and you might find it to be so too.

It was a thrill for me back in February of this year when I was contacted by the office of Sir Richard Branson to see if I might contribute to a “book”  his office was putting together, specifically:

“Virgin is embarking on a project to consider the future of UK work and business 20 years from now. We’re keen to bring together some of the best minds in the country – to form predictions on the most pertinent emerging trends and recommendations for how we best work towards a thriving 2037.”

Their ask  was to see if I could contribute to a section on the future of the workplace, as in:

“The How you Work chapter will focus on working environments, communication with colleagues, access to the office, commuting, global vs local, access to support communities”

The idea was that they would deliver this sometime towards the end of this month, with a number of contributors participating. They indicated that given my background with speaking and writing about the future of the workplace, workforce and the organization that I would have some ‘powerful’ insight.

I don’t mind saying that being involved in such a project would certainly be a thrill and probably one of the highlights of my global career, next to such things as doing talks for Disney, NASA and the Swiss Innovation Forum!

With that, an exploratory call was arranged by the folks at Sir Richards office to discuss my potential contribution. I took the call while out on a ski hill, and we kicked ideas back and forth for about 1/2 hour. The call certainly seemed to go well, and they indicated they would get back to me within a week to talk about ‘next steps.’

And then, silence. Nothing. So I followed up with an email. Then another, and then another. And ….nothing. Complete and utter — and baffling — radio silence. Not a simple, single response to several emails asking if the project was moving on. Not even anything telling me, ‘thanks for the exploratory call, but we’ve moved in other directions…..”

To this day, I still don’t even know what happened with the project. Who knows — maybe we’ll see something in the next few weeks, and I will know that I didn’t make the cut.

So what? Well, here’s the thing: what I see from Virgin in this case is complete disrespect from Sir Richards staff. The complete and simple lack of the courtesy of a response to several inquiries, following up on our original conversation. How do you square that with the promise of a CEO to treat his staff with respect? If that very staff can’t treat potential external business partners with similar respect….?

This isn’t sour grapes; it would have been a lot of fun to participate. Heavens knows I’ve got plenty of other things to do….

But what gets me is this: Sir Richard is known for establishing companies, and a culture, that thrives on the utmost of respect and service. Virgin Airlines, for example, can put many other companies to shame for its ability to be relentlessly customer centric. His promise in a quote such as above is to excel in establishing a staff culture based on respect…

Yet that respect doesn’t seem to trickle down from his office….

My question to Sir Richard is this — why can the staff in your office not carry the same attributes? It might be time for you to ask a few questions….

“For as long as there has been a future, there have been people who don’t like it!” – Futurist Jim Carroll 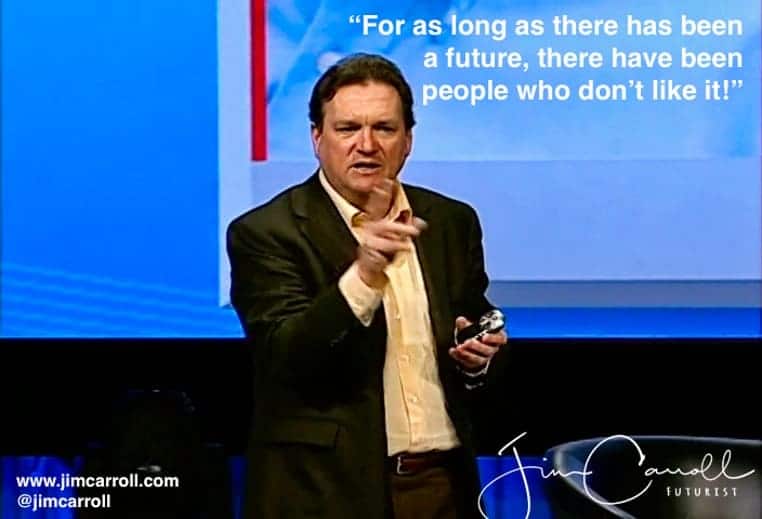 “Every day, I have a look at the pages on my Web site that people are looking at ; yesterday, someone spent some time on a post I wrote which featured a video of my keynote for the PGA of America in which I spoke about golf carts and the future! When they arrived, people hated them – they suggested that golf carts would ruin the game! Instead, they helped to bring more people into the game — and today, I’ll golf at my home club, and another member who is 86 years old will go out for a round because he can – because he can take a golf cart!

The future is going to happen to you whether you like it or not. The big question is : what are you going to do about it?’’

“An idea on its own is just an idea. Shared ideas are different – they accelerate innovation through faster discovery of opportunities!” – Futurist Jim Carroll 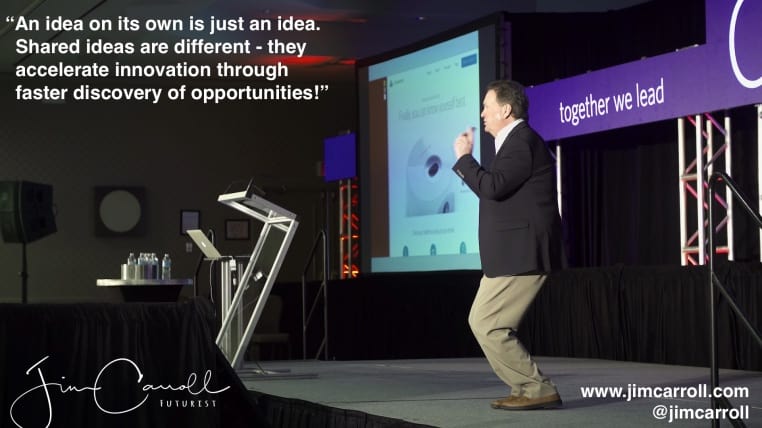 My audience with Godiva Chocolates yesterday was for a global team — people from the UK, Europe, Singapore, China, Japan, the Middle East, North and South America – the world! Part of my message was that in the fast changing world of retail, they need to work harder to discover new opportunities — and that this will best come through developing a culture of collaboration!

This is often a key message for many of the global talks that I do. Do this yourself – an idea on its own is not very powerful.

This morning, I hop on a plane to come back home to Toronto from Brussels.

A quick but fun trip!