I found myself in Sonoma County, California earlier this week; I was the opening speaker for a small corporate conference that featured what were probably the top 100 cattle, stockyard and feedlot operators in the US. 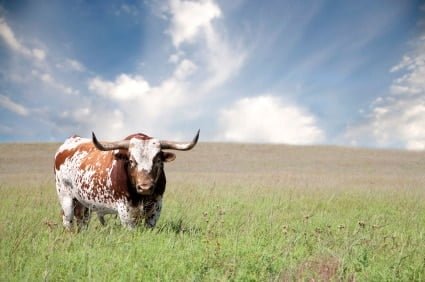 This was a pretty heavy duty event, so to speak, with some individuals representing ranches with upwards of 30,000 to 50,000 head of cattle. We’re talking billion-dollar operations here. A very exclusive group – as noted in the invitation, the sponsors ” have partnered to create an advanced leadership development curriculum entitled the 4C Summit – an experience that will be unlike any other ever offered in animal agriculture.”

My role? To encourage this group to think about future trends in the world of agriculture and food production; opportunities for innovation; and how to live out on the edge in terms of thinking about big ideas.

What the client DIDN’t want was what he found  from a lot of other innovation speakers he spoke to, who seemed to offer up the same refrain: “Plug into Twitter, get onto Facebook, get social, and you’ve mastered innovation!”

Uggh. Yah, right! Real innovation comes from studying obvious future trends, and aligning yourself to those trends to seize opportunity and achieve growth.

So it was a thrill to speak to such an exclusive group — and I had a lot of ground to cover! First off, recognizing that this could be a dispirited crowd given past trends — they could be in a mindset that might not encourage innovative thinking.

After all, as I pointed out, they’ve suffered from:

What’s the result of these trends, and the impact of the recent recession? Aggressive indecision — a mindset that I’ve talked about on this blog for a long time.

“Many ranchers are wary of investing in expanding their herds, even with exports rising and prices climbing, because “they’re uncertain about the future,” said Gregg Doud, chief economist at the National Cattlemen’s Beef Association, which represents ranchers and feedlots.” Where’s the Beef: Food Inflation Fears, Wall Street Journal, August 2010

Yet given this uncertainty, what are the trends that drive the opportunity for
innovation? I covered many; here’s a few.

1. There is massive, significant opportunity for global growth.

The statistics are simple and clear:

In other words, existing producers will have to double production to keep up with global demand.

Clearly, a substantial number of people are entering the global middle class through the next decade; as noted by McKinsey: “Almost a billion new consumers will enter the global marketplace in the next decade …. with an income level that allows spending on discretionary goods.”

As this transition to middle class occurs, entire societies will transition to a diet that involves more consumption of meat. In India, the #1 “aspirational purchase” is a television. What do you think is #2? If you said a car, you are wrong — it’s a refrigerator! And right now, refrigerators have only a 13% market penetration! Talk about opportunities for growth.

2. There are significant long term trends that will drive global agricultural innovation and opportunity, if approached from the right perspective

I also covered four key trends that will have a huge impact on agriculture from every single perspective:

On the first issue — we are going to witness many nation states work fast to ensure the security of their food supply. We are seeing it happen now with China, in order that it can ensure a sustainable reliable supply of food for its population in the future. How big an issue this is this?

The issue of food security leads to the second big trend, and that is significant international agricultural investments. Quite simply, there’s a lot of investment money sloshing around involving agriculture.

“The World Bank reported this month that the number of large-scale farmland deals in 2009 amounted to about 45 million hectares, compared with an average of less than 4 million hectares each year from 1998 through 2008.” Investors bet the farm, Los Angeles Times, September 2010

Even Harvard University is getting into the act,  with a significant investment into one of the biggest ranches in New Zealand — the Big Sky Dairy Farm in Central Otago. (New Zealand Herald, June 2010)
These two trends are unfolding at the same time that sustainability practices moves to the forefront of customer agenda. Consider a very unique partnership between some “unlikely allies” that involve sustainable business practices in agriculture. This is going to affect EVERYONE in the industry:

What is cooking is an effort by these organizations to move to sustainability practices to the forefront, in order to respond to consumer demand. And what the sustainability trend leads to is a world in which food quality and safety ratings become commonplace.

Wal-Mart, which sells more than 20 per cent of all US groceries, is developing an eco-labelling program that will give a green rating to all items sold in its 7500 stores worldwide…. Unlikely alliance, Sydney Morning Herald, February 2011

This will trickle right down to the farm and the ranch: agriculture is going to have to demonstrate sustainability at a micro-level:

“A group of cattle producers in Gippsland, Victoria, is marketing beef sourced from properties with independently audited environmental management systems that comply with the international ISO 14001 standard. Their “enviromeat beef”, sourced from 15 suppliers, is thought to be the first labelled food product backed by an environmental management system in Australia.” Unlikely alliance, Sydney Morning Herald, February 2011

Many farmers and ranchers might view these issues as a challenge, and a threat. But as I emphasized in my keynote, “Some people see a trend and see a threat. Others see opportunity!” The key innovation opportunity is now to work within these new realities in order to stay ahead of what the customer demands!

3. Ranchers need to think big! There are huge transformative opportunities!

I always pull out a number of examples of some of the big, bold, whacky innovative thinking that is occurring in any particular industry.

I’ve long observed that one of the key global economic drivers is that a lot of people are spending a lot of time solving the big problems faced by the industrialized world. In my “Where’s the Growth” trends document, I make the observation:  “What’s likely to lead us out of this recession? A combination of bold goals on energy and the environment, significant investment in health care to fix a system that is set for absolutely massive challenges, combined with high-velocity innovation in all three sectors.”

In the spirit of that observation, think about this report!

America’s dairy farmers could soon find themselves in the computer business, with the manure from their cows possibly powering the vast data centers of companies like Google and Microsoft…..With the right skills, a dairy farmer could rent out land and power to technology companies and recoup an investment in the waste-to-fuel systems within two years, Hewlett-Packard engineers say in a research paper to be made public on Wednesday…According to H.P.’s calculations, 10,000 cows could fuel a one-megawatt data center, which would be the equivalent of a small computing center used by a bank.

”The cows will never replace the hydroelectric power used by a lot of these data centers,” Mr. Kanellos said. ”But there is interest in biogas, and this presents another way to make manure pay.”“One Moos and One Hums, But the Could Help Power Google”, New York Times, May 2010

Whacky? Crazy? Who is to say! I actually wrote about this opportunity back in 2004 when I penned my “I found the future in manure” article!

4. Innovators concentrate on all kinds of innovation opportunities

I’ve always stressed that people can challenge themselves to innovate by focusing on 3 key questions; what can we do to run the business better, grow the business, and transform the business.

In that context, for these ranchers, there’s plenty of innovation opportunity. When it comes to running the business better, there is a massive opportunity for the continued deployment of technology to better manage the herrd, deal with food safety and tracability issues, manage the health of the herd; the list is endless! Growth of the business? Consider the opportunities that come about with direct-to-consumer relationships as our world of connectivity continues to expand. Transform the business?  Change the business model! One Australian group was faced with the challenge of getting fresh meat to Indonesia — and so they built the MC Becrux — basically a floating stockyard for thousands of head of cattle! (I admit, to go forward this will have to be done to fit into the sustainability model….)

Quite simply, there’s a lot of scientific driven innovation in the agricultural sector. One conference I spoke at noted that we are seeing a lot of “advances in genomics, combinatorial chemistry, high throughput screening, advanced formulation, environmental science and toxicology, precision breeding, crop transformation, nanotechnology, synthetic biology and bio-informatics are tools that will transform the industry.”

It couldn’t be said better. Even the field of animal genomics is evolving at a furious pace — the same trend in which Moore’s law is driving down the cost of sequencing the human gene, so too it is with animal genetics, which has a big potential impact on the quality of future production.

Perhaps the biggest trend occurring in agriculture today is that we are seeing a generational turnover. As the family farm and industrial ranch transition from the baby boomer to today’s 25-30 year, there will be more rapid ingestion of new technologies. Quite simply, we are going to witness more change on the farm and ranch in the next ten years than we have seen in the last 50! That’s providing even yet more opportunity for innovation.

As always, I had a lot of interaction with the audience through Q&A, and live text message polling. I walked through the innovation killer attitudes that I often talk about, and asked the audience what they thought they were most guilty of. Here’s what they had to say! 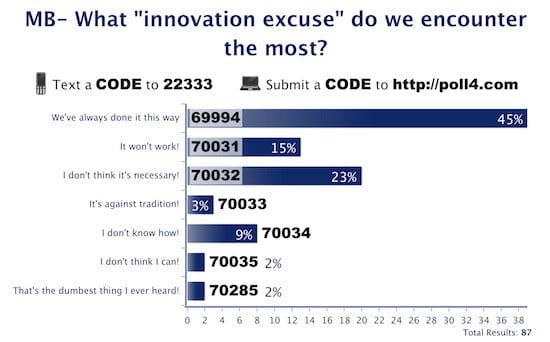 Overall, it was a great day, a great keynote, with a lot of the unique research and background that I take on for this type of assignment!