Daily Inspiration: “It’s times like these you learn to learn again!”

“It’s times like these you learn to learn again!” – Futurist Jim Carroll
(With a shoutout to Dave Grohl and Foo Fighters!) 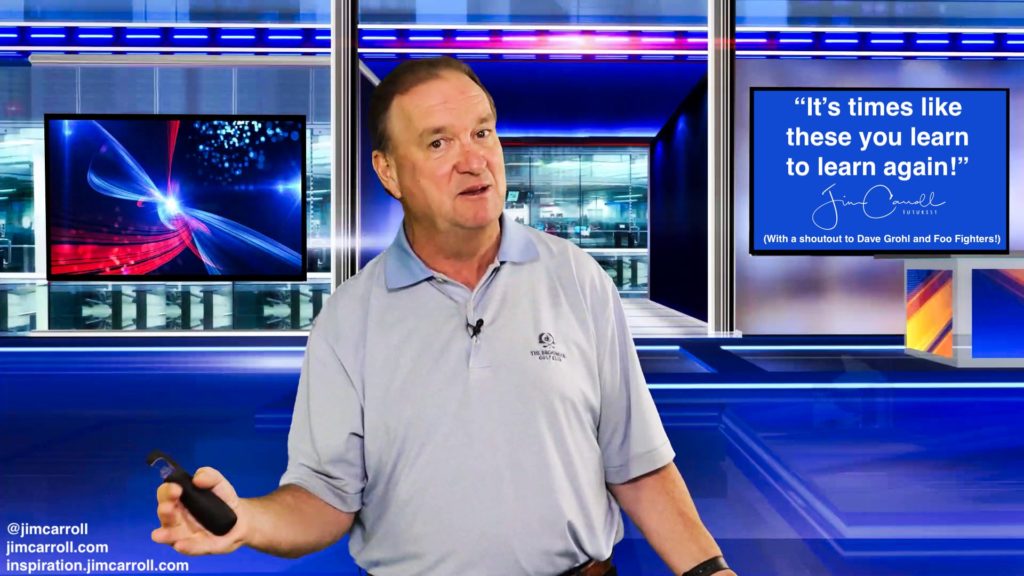 What new skill or capability have you learned during the last six months? What’s your plan for the next six if you find yourself, like me, having to reinvent at a pace that is simply staggering?

I look at what I was able to do in my virtual broadcast studio on February 16 – which is to say, not much. I had a green wall and not much more – but an imagination. Having just returned from one of my last events in Las Vegas, I already had a sense that my successful 25 year track record as a speaker on stage was going off the rails – fast.

So I started to learn. Slowly, at first. My first online broadcast attempt was with a still image background. (I  will says I already had remarkable video production capabilities with my overseas video producer – I’ve got a fantastic video coming up after today! – but really had no capability to ‘go live and do a show.’)

My green wall became my canvas of creativity, my launchpad for reinvention.

And I moved crazy fast – I still am! Today, I think I’m leading the global pack when it comes to virtual keynote capabilities. I am sometimes stunned by how much I’ve been able to learn – and yet am frustrated that I have so much more learning to do. There are capabilities with video editing, creative design, staging that are on my list, and every day, I set out to try to learn a little bit more.

I was reflecting on this journey of knowledge yesterday while out on a long bike ride – and then the Foo Fighters song Times Like These popped into my music list.

What an apt metaphor!

Reinvention surrounds us – and you need to be a part of it. You can also gain tremendous inspiration when you see it in action. Case in point – I’m on a Facebook group of event and meeting planners – individuals like myself who had a career based on a now-decimated meeting and convention industry. It includes people who manage vast Las Vegas conferences and events, staging and AV company representatives, all the way to individuals who provide a vast range of other services to the industry -ticketing, food, party planning services and more.

Reinvention? I was inspired by a post by one individual who commented, “I started teaching on Outschool a couple months ago. This company began as online learning platform for primarily homeschoolers but has had exponential growth since quarantine began.”

The key line that reached right into my soul and gave it an electric shock of enthusiasm?

“It’s a great opportunity if you can take topics you already speak about and convert them into kid-friendly classes. With many parents keeping their kids home this upcoming school year I think the growth potential is unlimited.”

Pathways for reinvention are everywhere – it’s all up to you! New industries are being born, ideas are being launched, successful pathways are being constructed, opportunities are accelerating. Be a part of it!

Times like these? You learn to live again. Take some inspiration from the BBC project, Live Lounge Allstars!