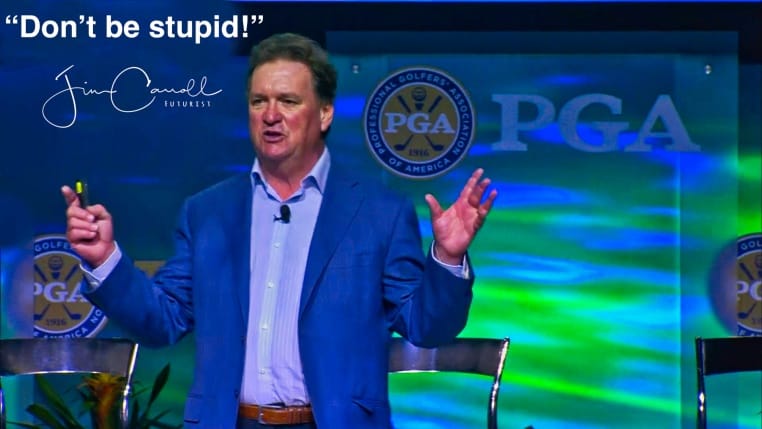 What a week I’ve had, and it’s only Thursday!
Read more about the reason below, but think about the context of the quote first. What are you going to do today that, in retrospect, will be pretty stupid? Don’t do it!
Often times, on stage, I’ll want to talk about stupidity. There’s a lot of it about. As a speaker, I’m often biting my tongue on stage, working hard not to say the things I want to say. As a later-in-life-now-obsessed-golfer, it’s become a bit of a mantra for my game management. And so what a week I’ve had already! I was on stage in New York Monday, and then have had 2 great days of golf. It turned into a little mini ProAm for me. Here’s an extract of what I posted on Facebook last night. —— So serendipity is giving me my own little private ProAm this week.
After golfing two days ago with 2 guys competing in the Canadian PGA Open – they were both scratch golfers — I show up at the tee today, and end up going out with two young fellows working hard to become real Pro golfers.
One is on the Canadian MacKenzie Tour, trying to get his card on the PGA Tour; the other is doing a qualifying round for the MacKenzie Tour on Monday, with the same goal. Christian dMarco is the son of PGA Pro Chris DeMarco (he came 2nd in the Masters in 2005, losing to Tiger Woods in a first playoff hole!) Christian lost a spot on moving to the US Open sectionals when he was not at the course when a tied spot was decided by a coin toss. Priyanshu Singh was on the University of Southern Florida golf team with Christian. Fun fact: he won the 115th Amateur Golf Championship of India in 2015! These guys could hit. On the first tee I realized I was out with 2 guys who can play.  My goal for the found quickly shifted: – don’t be stupid. Don’t rush. Focus on your shot. But have fun!
I kept up. I didn’t look stupid. I was hitting greens, landing wedges, dropping putts. There was no river. And while I was in 2 bunkers, I had awesome shots out.
I even sort of looked like I knew what I was doing. I shot an 88, which for my handicap of 19 is spot on. Awesome fun! Summer is here, and I’m only 3 days in!