Some weeks back, a post caught my attention, I clicked the link, and followed through.
I ended up buying The HAL Project screensaver, from The HAL Project. 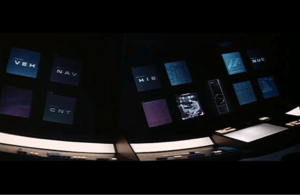 Essentially, the project recreates *every* screen of the computer that was HAL as seen in the movie from decades ago. (click for a larger image).
A few weeks back, I was in New York, about to go on stage, and my screensaver began running, with the HAL screens. Some folks caught what was going on, and the conversation was magical.
Just another random moment in the ongoing effort by folks around the world to archive the past, in a way that goes forward into the future!