Category under: Articles, Blog, How to be innovative, Innovation
DAILY
MOTIVATIONAL
INSIGHT
FROM
JIM

A few days ago, the Smart Blog on Leadership wrote a blog post covering my recent keynote at the IMXchange manufacturing conference in Las Vegas. It drew quite a bit of attention on Twitter, particularly the vein having to do with my concept of what holds back a lot of innovation  efforts. 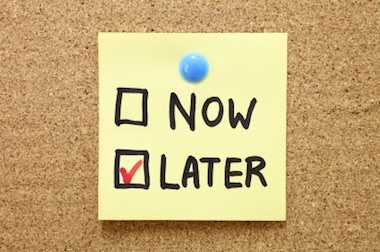 Some of the Twitter retweets began to focus on the section in the post which concentrated on my idea that what holds back a lot of innovation is a culture of “aggressive indecision.”

This is a topic that I’ve been writing about and speaking about on stage for well over a decade — indeed, since the dot.com bust more than a decade ago!

I’ve actually got the video clip from the Las Vegas keynote available on this blog — watch it here — and you’ll see the comments that the SmartBlog on Leadership picked up on.

In addition, I thought it might be a good time to pull tout an article that I wrote way back in 2003 about aggressive indecision. It made sense back then — it seems to make even more sense today given increased economic volatility. There’s valuable lessons you might use to challenge yourself as to whether you or the organization you work for is suffering from this malady.

Paralyzed by indecision? Just do it; Fear of the unknown has made doing nothing the new reality in business. Here’s how to stop spinning your wheels
18 July 2003, The Globe and Mail

You’ve been providing clients with a project quote every quarter — and when you decide to finally press them to close the deal, they are shocked to learn that you’ve been doing it for 2½ years.

You have a new initiative based on a key business trend that is still on the list of “things to deal with” — long after the trend has gone supernova and disappeared.

You finally decide to upgrade some of your significant business systems — only to learn that you’ve waited so long that the software you plan on purchasing is already out of date.

Sound familiar? It should. It’s the new reality in business: aggressive indecision.

Corporations have lost their sense of direction. In the nineties, people had a sense of purpose, a desire to get things done. “Nobody knows where we’re going, but we’re making great time” could have been the catch phrase. Well, now no one knows where they are going, and they sure are taking their time getting there.

Quite simply, people have decided not to make decisions — and they like it. The result is a economy in which everyone seems to be stuck in a rut, unwilling and unable to move forward.

Why is this happening? In part, fear of the unknown. Executives are afraid to make decisions because the next unforeseen event might prove to have negative consequences. Combine this with the current focus on cost-cutting, a disastrous number of ill-advised decisions in the past decade during the investment bubble and increasing corporate scrutiny as a result of ethics scandals, and you’ve got a general reluctance with many executives to do anything new.

The fact is, our confidence in the future has been shattered. Corporate nervousness has become the watchword, with the result that everyone is taking the easy way out: Deal with uncertainty by doing nothing.

What should you do to deal with this new reality?

First, look for the warning signs: a business mindset that is adverse to any type of risk; an absence of any new product or marketing initiatives; or an organization that is stuck in a rut, wheels spinning, and no one has decided even to call a tow truck.

Second, realize that aggressive indecision means that you’ll likely have to respond to external pressures faster than ever before. That’s because while people have learned that they can hold off until the very last minute, they are also learning that they can still get things right. This leads to a business cycle that involves extended periods of frustrated waiting, followed by a blur of activity as organizations rush about to respond to the customers’ demands for instant action.

Third, be prepared to change your corporate culture and work processes. You can’t get mad at your clients for waiting for 2½ years and then making a decision with a demand that you be there tomorrow. Don’t let it lead to an expectation gap — when your customer lives with aggressive indecision and you are still geared up to perform and deliver at the slow and steady pace that might have been appropriate in the past.

Finally, make some decisions. Remember what it used to be like when you had the courage to do something? Let’s call it the decision adrenaline rush. It’s good — and it can be addictive.

Want to test it? Find the one big decision that you’ve been deferring the longest, and decide one way or the other. Right now. Didn’t that feel good? Try it again — immediately. See? Isn’t that an amazing feeling?

You might not have made the right decision, and something could go wrong — but at least you’ve decided to start moving forward, rather than spinning your wheels in the mud. Battle aggressive indecision and you’ll find that you’ll gain back control over the future.

If your company is in the indecision funk, there is hope:

If your clients or colleagues are suffering, you can:

The natural human inclination when faced with something that is uncomfortable is to turn away from it — lingering uncertainty is the root cause of our aggressive indecision. But we can’t afford to do this any longer — our careers, our companies and our future depend upon our ability to cope with a world of constant change. We’d better get used to it and take the time to learn the skills — and the attitude — that will help us to thrive in this era of uncertainty.