Daily Inspiration: “The wisdom of the crowd will turn any hero to a zero in but an instant!”

“The wisdom of the crowd will turn any hero to a zero in but an instant!” – Futurist Jim Carroll 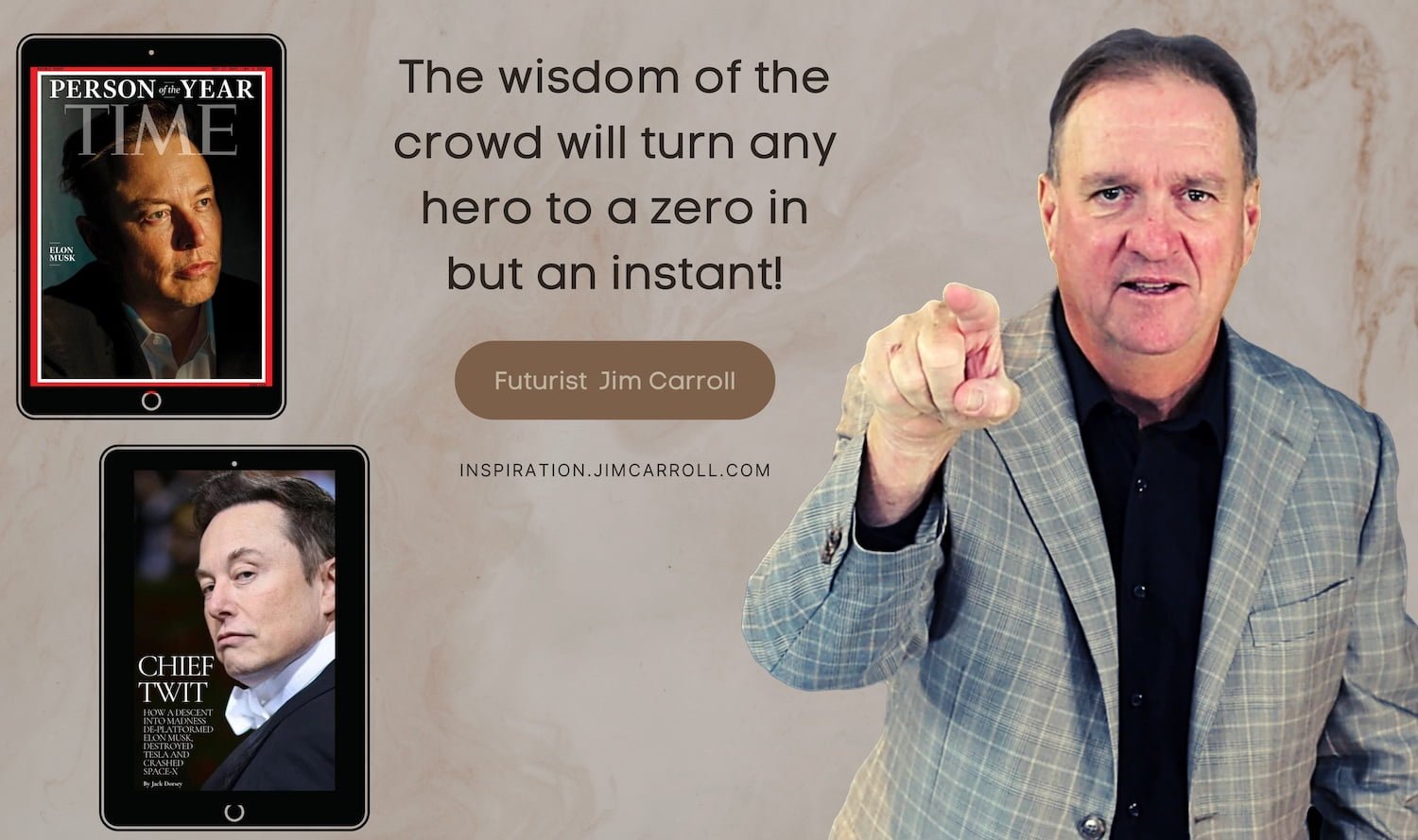 If you are in technology, you will know the truth of that statement; if you aren’t, things won’t much matter to you. But in the ongoing soap opera that has marked Elon Musk, this weekend marked a new low in human empathy,  respect, and perhaps, intelligence. The further damage to his ‘brand’ and image has been incalculable, particularly among the community of software developers and tech evangelists who once worshiped him as a hero, but now view him as a zero.

Some context is helpful. If you are on Twitter, you might use an iPhone, iPad, or Android app on your mobile device – things like Twitterific and Tweetbot. These are not the official ‘apps’ for the service, but software released by ‘3d party developers’, using what is called an API – an ‘Application Programming Interface.’ Basically, Twitter, like most other software companies, released an API well over a decade ago that allowed other companies to tap into the stream of data it provides, in order to develop ‘apps’ that would enhance the service.

Millions upon millions used programs and apps developed around the Twitter API; products were developed, companies were established; careers were pursued; revenue streams were established. Entire lives were built upon the key understanding that Twitter had an API that it allowed people to reliability use. It’s all part of the way that Silicon Valley and the software industry have worked for, well, forever. There is a compact, understanding, that we’ll give you an API – a set of rules that you can write code against – so that you can write some great software to access our software. We’ll make sure that it works and is accessible, and so you can trust your future to our integrity.

APIs are everywhere and there will be many more in the future – they let your smart thermostat talk to the other smart devices in your home; they let your medical blood pressure cuff send data to your doctor; they let PayPal talk to your credit card issuer to process a payment. It’s fair to say that without APIs, there would be not much of a future for technology since they are the key to the interoperability of different services. It has long been understood that APIs are a compact, a contract, a foundation for how things work.

Simply put, every tech company on the planet has always ensured that its APIs were always working, and supported, and that the developer community could trust that this would be the case.

Suddenly last week, the APIs stopped – with the result that all these apps simply stopped working. There was no statement from Twitter and no announcement by Elon Musk. No one knew why they suddenly stopped – but many had their suspicions. They couldn’t reach out to Twitter for technical support because, well, there really isn’t anyone left there. Musk? While this was unfolding, he kept on tweeting the deranged things that he has been tweeting lately, conveniently ignoring their pleas and perhaps celebrating the fact that he is the first human to lose $200 billion dollars. There was no PR department that would respond to news media requests for an update on why this happened – because he got rid of the PR department.

It’s safe to say that Twitter has simply become an empty shell of a cancerous leadership culture that seems devoid of pretty much anything. Days later, there has still been no official statement, although there have been leaks that the situation was intentional.

And the development community is, to say a word, pissed:

Craig Hockenberry of the Iconfactory, which developed the fantastic Twitterrific app, and who has invested significant time and energy in the overall development of Twitter since the start – his life for the last 15 years – had this to say:

What bothers me about Twitterrific’s final day is that it was not dignified. There was no advance notice for its creators, customers just got a weird error, and no one is explaining what’s going on. We had no chance to thank customers who have been with us for over a decade. Instead, it’s just another scene in their ongoing shit show.

What’s infuriating is how clueless, classless, and cowardly this move was. Not only does pulling the plug without any announcement or explanation—let alone any warning!—disrespect the developers who worked with Twitter for years, but it directly disrespects Twitter’s own customers, many of whom contribute a lot of free content to the overall platform. Why do this quietly one evening and never make a public announcement? Why not just announce that the API would be shut off for client apps next week, or at the end of the month?

The sad thing is, this was entirely predictable. If you go back to a post I put together about Musk and leadership hubris, you will have seen this chart: 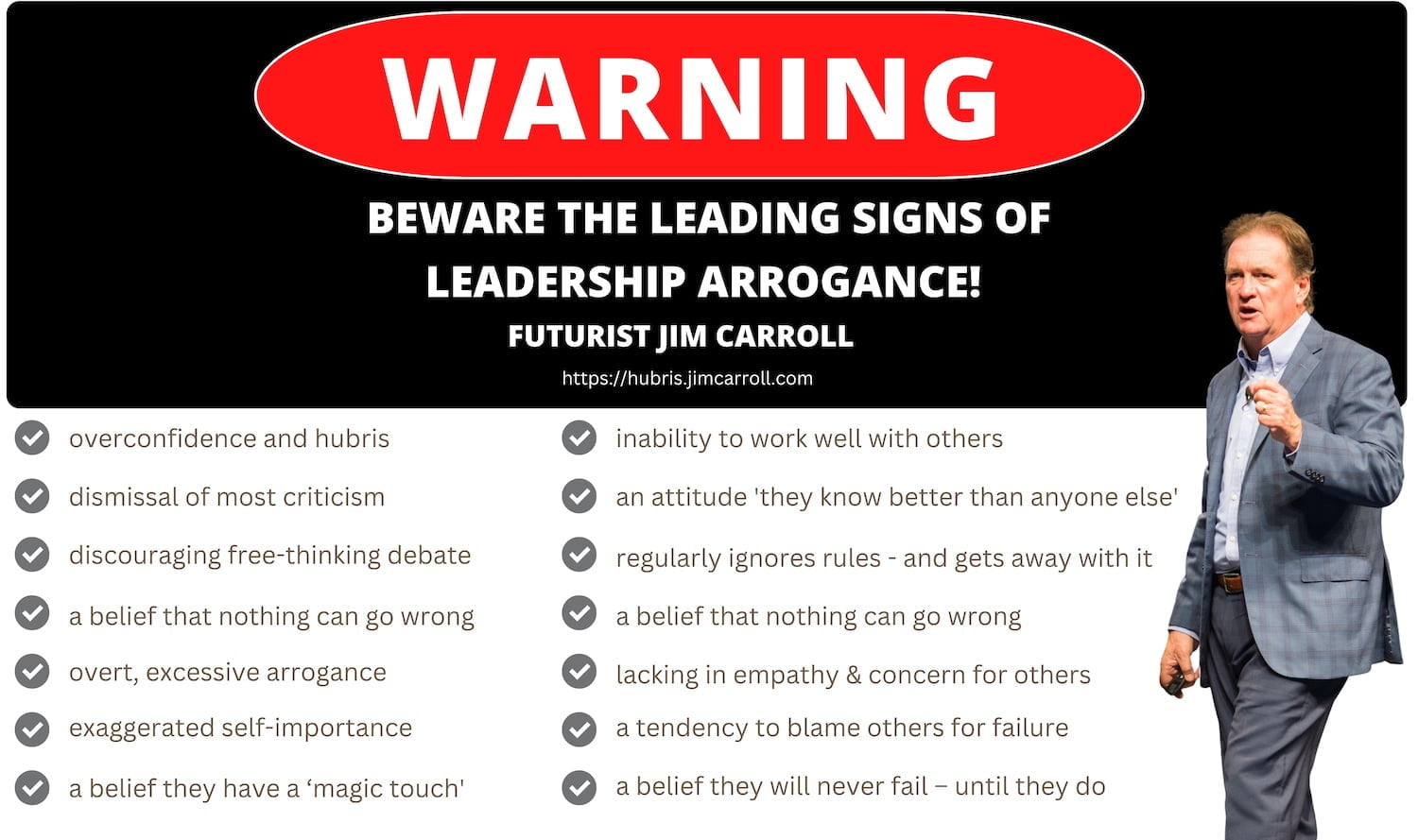 Take a look at the third to last bullet on the right: ‘lacking in empathy & concern for others‘. Of course, that would have predicted this state of affairs perfectly. He might be a brilliant man, but it is pretty apparent that he has nothing inside his mind but vapid and hollow darkness.

It is amazing how fast and far he has fallen. Just over a year ago, he was proclaimed Person of the Year by Time, and the press was laudatory; considering what they had to say at Today.com:

The CEO of Tesla and SpaceX and the wealthiest person in the world has remained a central figure in news as he and his businesses continue to frame the future of automobiles and space travel.

“He is reshaping life on Earth and possibly life off Earth as well,” Time Editor-In-Chief Edward Felsenthal said during live appearance on TODAY Monday.

Today, he is ridiculed, loathed, despised, and even worse by the community that has supported him for so long.

The only people that seem to be actively supporting him are the right-wing cheerleaders active on the platform, cheering him on, and exposing him for being the racist that he has been all along. Over on Twitter itself, it’s becoming a hollow ghost town of mindless posts by the lunatic fringe, devoid of much useful content. Pretty much anyone that I have been following – scientists, health care professionals, leadership gurus, technical experts – has been moving over to the global collaborative network known as Mastodon. Entire communities have been leaving Twitter – it is a ghost town of steaming trash.

How far has he fallen in his march from hero to zero? The story is still being written, but I suggested some months ago that perhaps someone would release a book about him in 2024 that would look like this – a dummy cover for a fictional book that is seemingly becoming real. 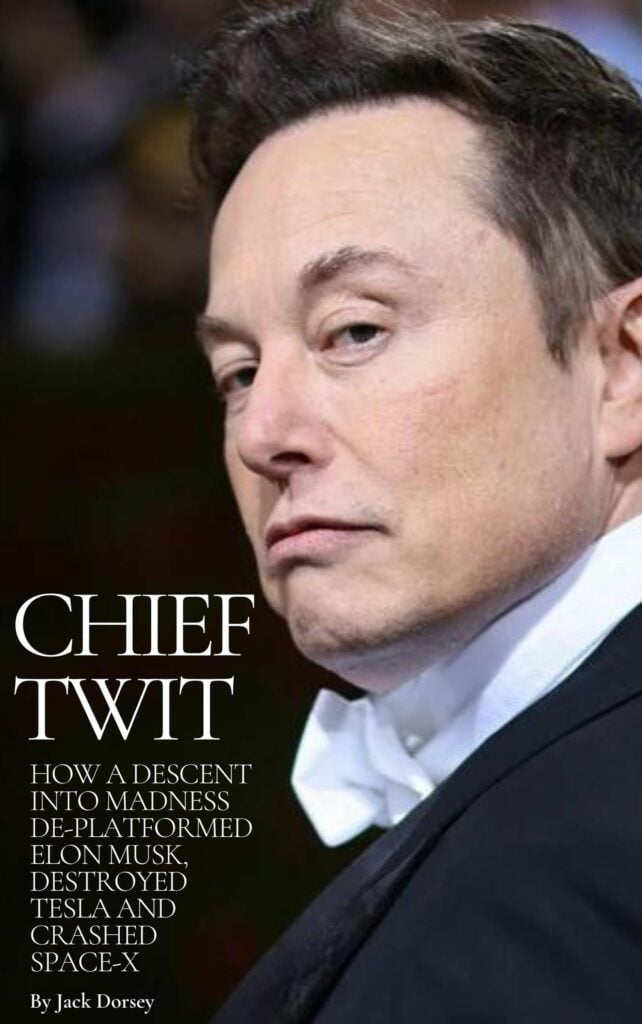 “Chief Twit: How a Descent into Madness De-Platformed Elon Musk, Destroyed Tesla and Crashed SpaceX’ was suggested as a joke but is becoming more prescient all the time. Because when you’ve lost the developers, you’ve shattered confidence and respect.

Does this matter to you? Not really.

But it does. Governments, agencies, corporate groups – everyone has a tremendous amount invested in Twitter. It had become the backbone for a lot of significant global communications. And it is now becoming evident that as it collapses, the world needs a better common communication pipeline. You can’t base your future on the whimsical attitudes and actions of an unstable demagogue. And I’m now witnessing many organizations coming to this realization.

The next steps in this ridiculous saga will see government agencies fine Twitter for not meeting obligations on the moderation of hate speech, child pornography, and other evils; it will see corporate groups continue to keep their advertising dollars away; it will see more and more people and communities drift away. Over time – but faster than you might think – it might collapse or disappear.

And there are people who are actively cheering on its collapse, and waiting for the humiliation of Elon Musk.

Because he has gone from being a hero to a zero – in a matter of moments.