.
Home   >   Blog   >   Daily Inspiration: “Always remember that every mistake is just an investment in your eventual success!”

Daily Inspiration: “Always remember that every mistake is just an investment in your eventual success!”

“Always remember that every mistake is just an investment in your eventual success!” – Futurist Jim Carroll 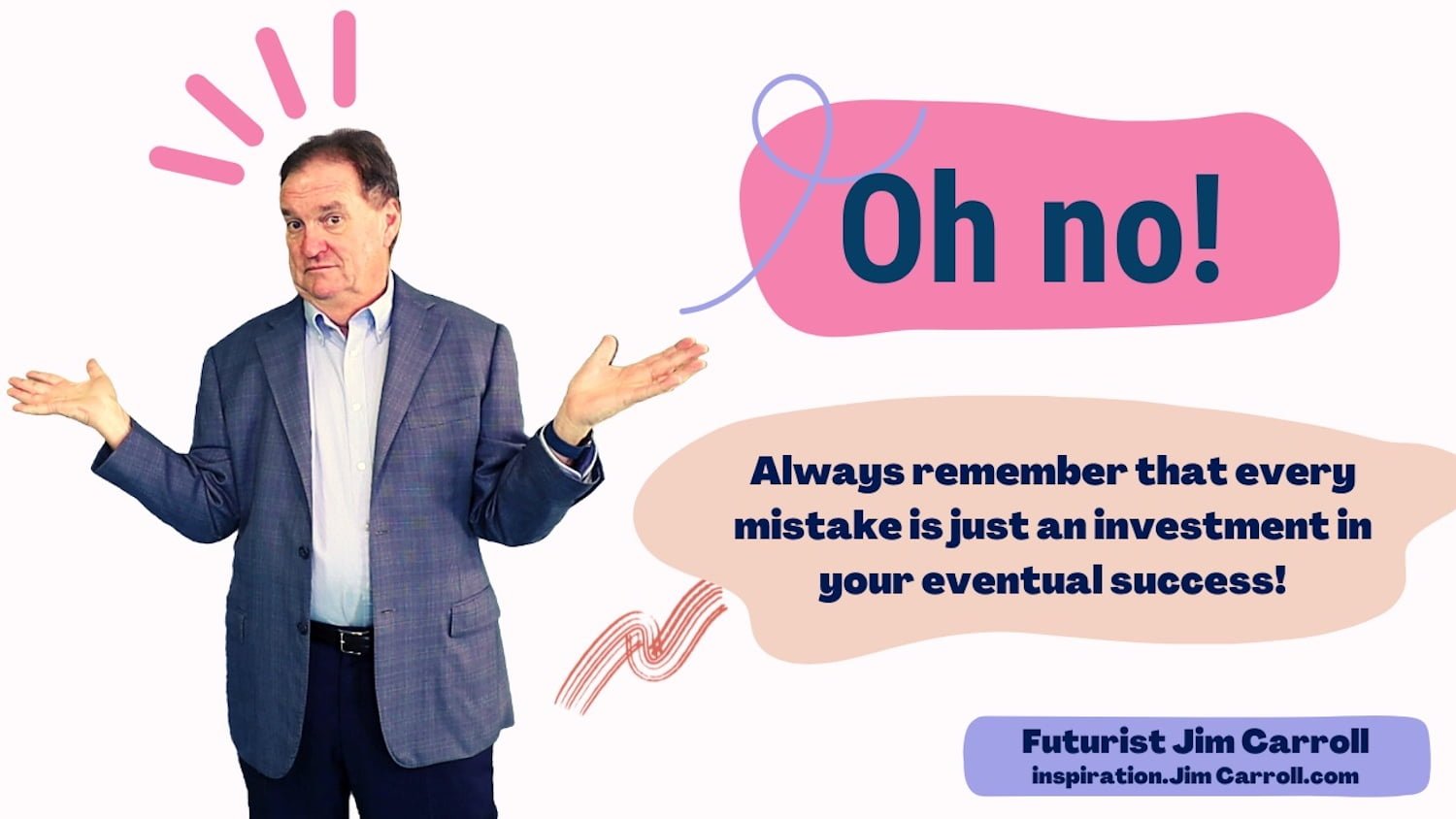 Well, welcome to all the new people who signed up for this Daily Inspiration mailing list in the last year – and who never actually received one!

I discovered to my horror two days ago that a small bit of code that was supposed to send your e-mail from the form that you used to sign up wasn’t sending the details to the database. All kinds of new subscribers were never added to the list. The result is that this is the first Daily Inspiration e-mail you’ll actually receive, and hopefully, not your last! You can find the archives at https://inspiration.jimcarroll.com and https://jimcarroll.com/category/daily-inspiration/. I’ve been putting these together since early August 2016 and have not missed one working day. They cover a wide variety of topics related to innovation, creativity, disruption, transformation, the future, and trends. People seem to like them and I hope you will stick around.

(If you are reading this via other networks that I post this to such as Substack and LinkedIn, you can ignore this part of the message!)

Sadly, these types of mistakes occur frequently in our world, and often become the basis for ‘lessons learned’ and ‘corrective action’ going forward. When it comes to the concept of innovation, I’ve always been a big proponent of the idea that mistakes are the engine of adaptation that helps us to discover what we can do right with our concept going forward. They are a foundation for your achievements. 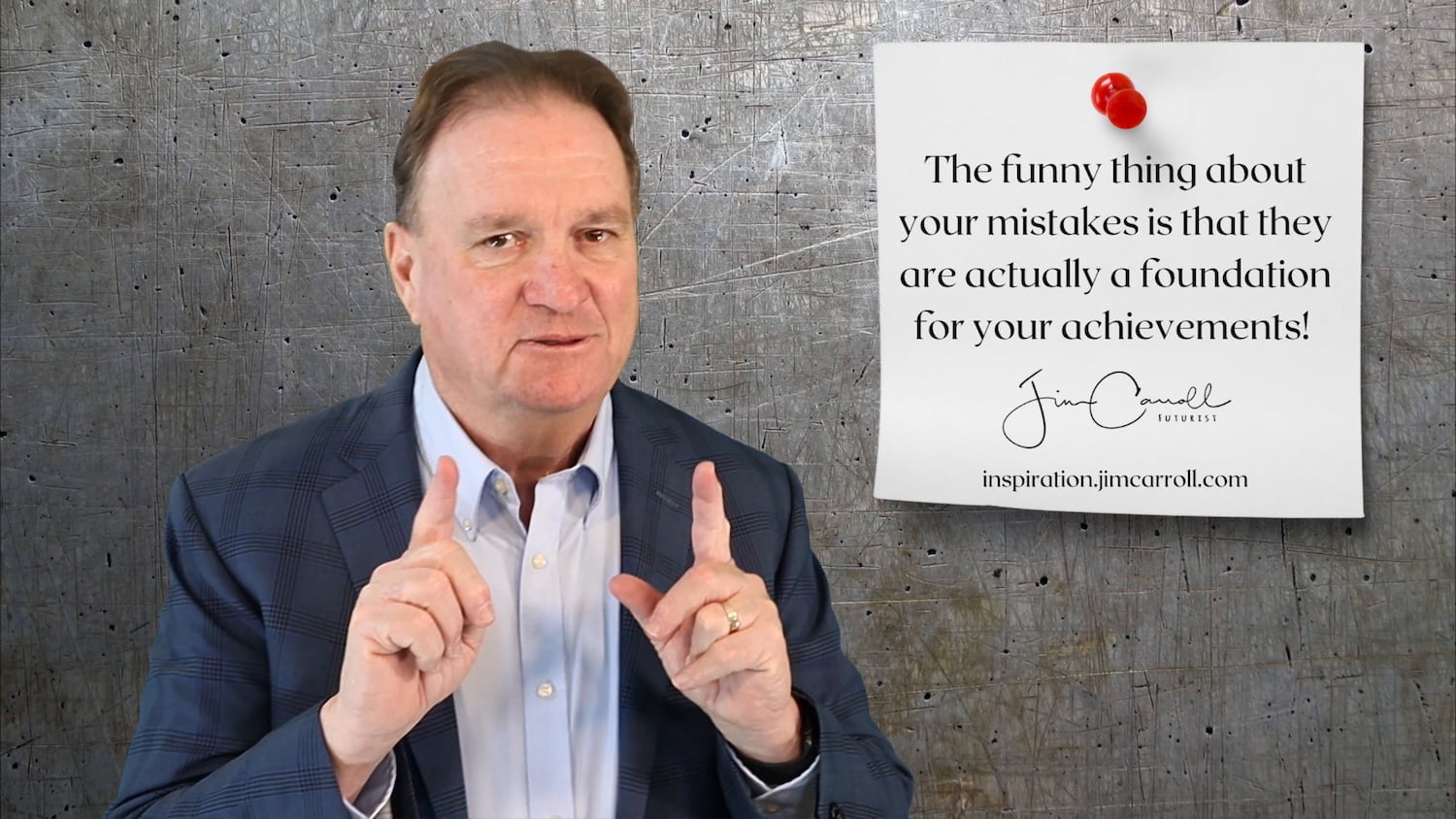 That said, the type of error I had with my Web site – mailing list integration is quite unacceptable and all too common, as are all kinds of avoidable software mistakes. Did you see what was the eventual cause of the US-wide airspace shutdown the other day when the Federal Aviation and Administration NOTAM system went down? One small mistake by an engineer managed to bring down an entire nation.

One would think that the FAA is now using this mistake as an important kickstart to re-examining the integrity of its systems. One small mistake has a huge impact!

Part of the challenge of our world today is that the foundation on which we have built the future seems to be engineered for small errors to turn into cascading challenges. There’s a cartoon over at xkcd – a marvelous tech-oriented cartoon that comes out daily – that summarizes the precarious nature of much of our modern infrastructure. This is particularly true when it comes to much of the open-source software such as Linux used in many major IT implementations. You might have one small bit of code in the ‘stack’ that was developed years ago that everyone has forgotten about – but if it goes wrong one day, the whole thing comes tumbling down! 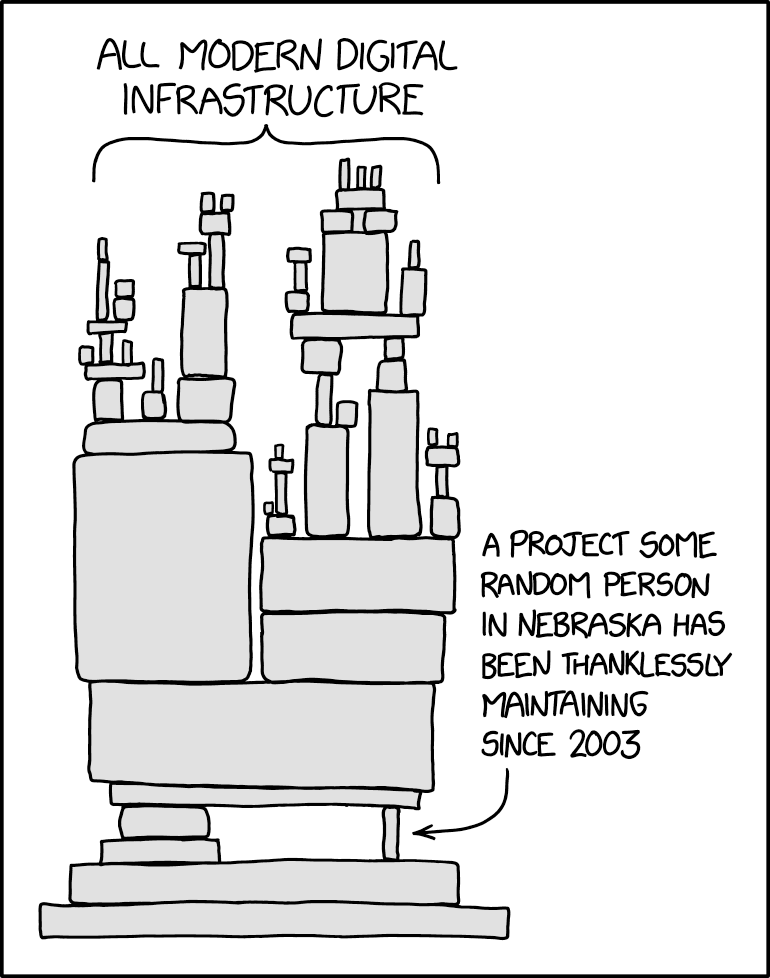 Then there are human-oriented mistakes. In Canada, where I live, more than 10 million people lost all Internet, cell service, and television for more than 24 hours last summer because an upgrade went wrong. This type of thing should not happen in our modern age, but it does.

You can be pretty certain, though, that Rogers – and other organizations who go through this type of thing – will view the outage as a powerful learning experience. I would bet – or hope – that they have intensified efforts to learn what went wrong, and how to avoid repeating that in the future.

Learning from mistakes? This goes back to the dawn of time – or at least, the computer age. There’s the famous story that seconds away from landing on the Moon, the Apollo 11 computer – shown below – was displaying a ‘1201’ alarm. Famously, an engineer quickly understood that it was an inconsequential programming error – nothing serious – and that the landing could proceed. That conviction and courage came from the many simulations that NASA ran prior to the actual landing – all-powerful learning efforts in which mistakes were analyzed over and over again. And going forward, it helped to imbue in NASA a culture of learning from mistakes. At least until this culture became sloppy, resulting in the Challenger shuttle disaster. 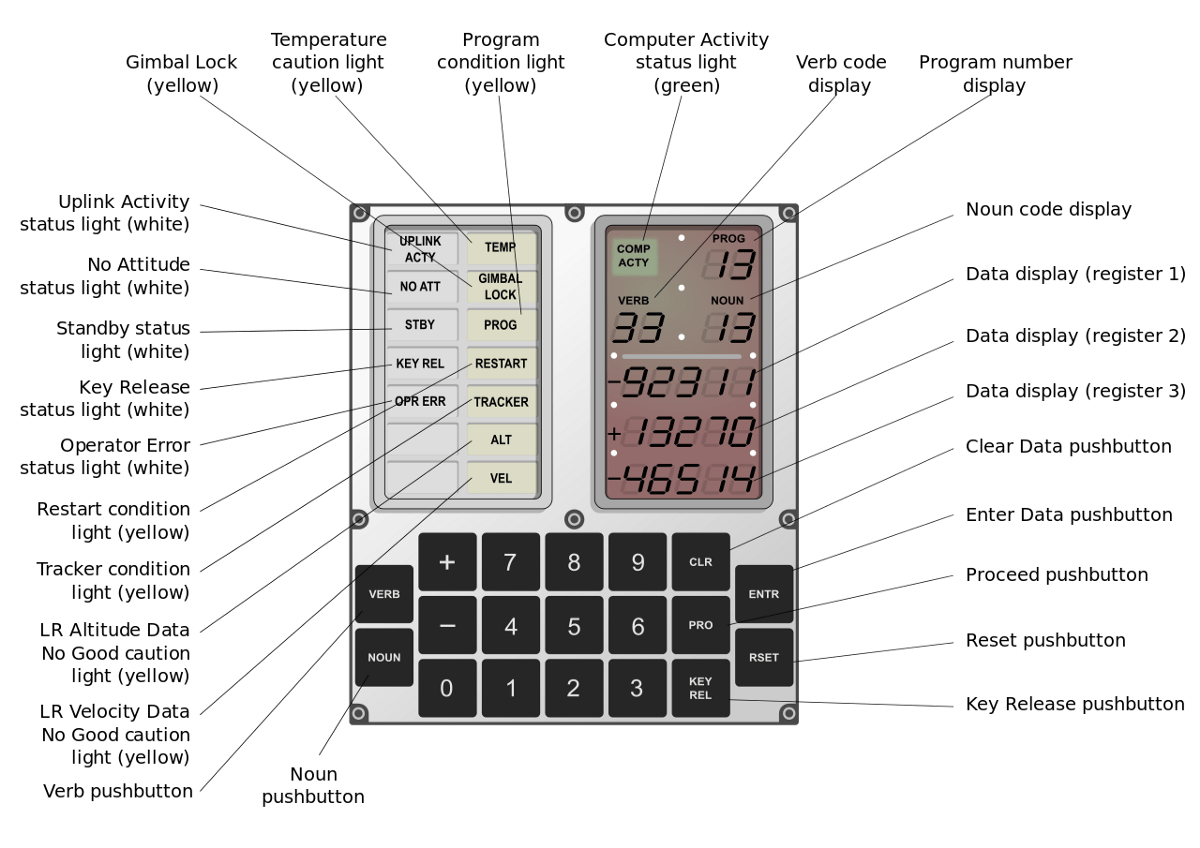 In my own case, it has reminded me of the importance of learning how to check all of the setups in my Web site integrations after I make a change, to avoid avoidable mistakes. Because every mistake is always a powerful learning opportunity.

Anyways – to all the new people here – WELCOME!