Daily Inspiration: “The only answer to your belief that you are invincible’ LOL!”

“The only answer to your belief that you are invincible? LOL!” – Futurist Jim Carroll 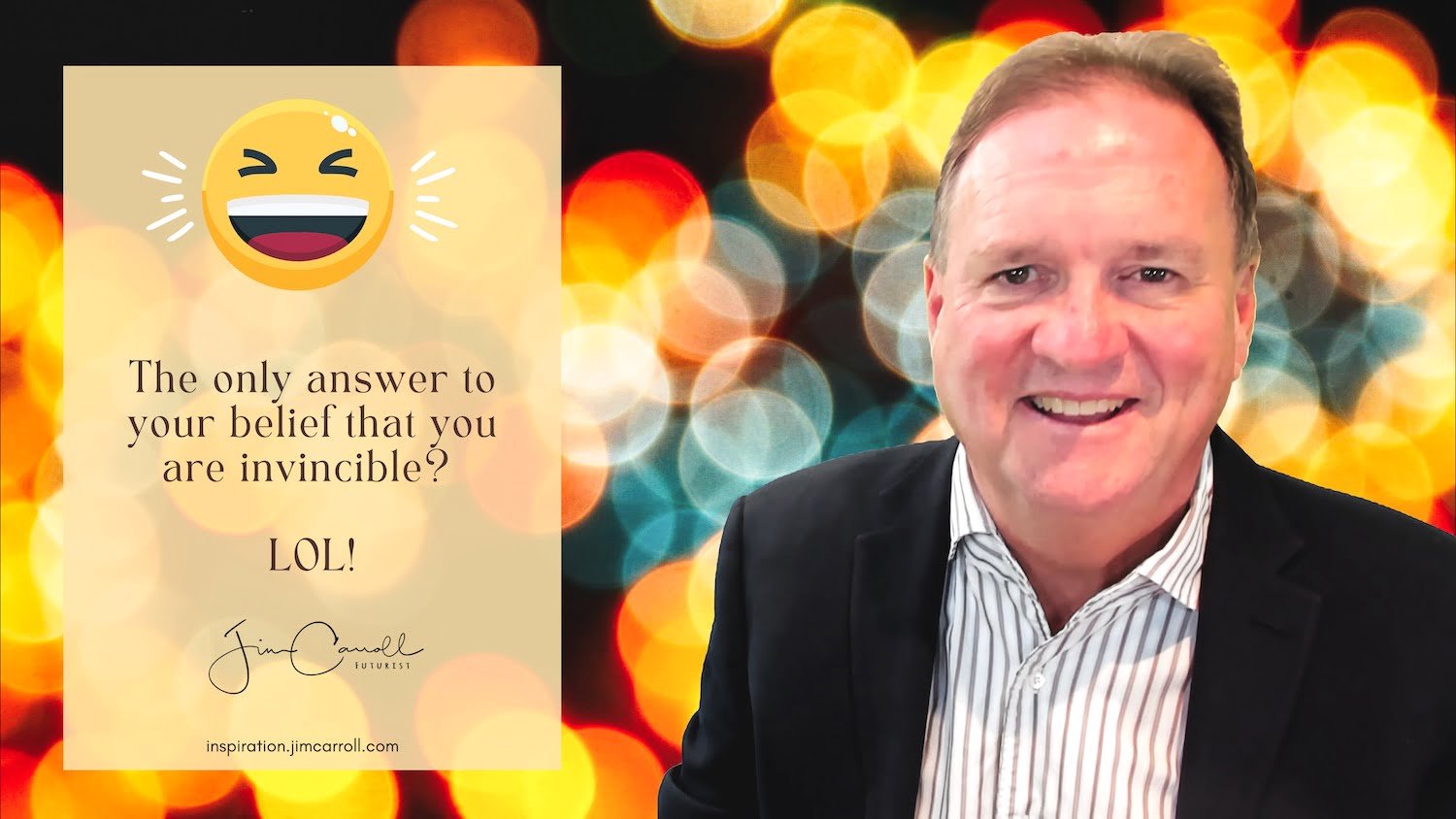 Here’s a golden rule to live by: it’s when you think that you’ve got everything under control that you are most at risk for failure!

People set themselves up for failure with an attitude they are infallible, invincible, unflappable. That’s the moment when you are weakest because you’ve let your focus on your success go astray. Feeling invincible is the worst thing that you can do in your continued race for success – but it’s an easy trap to fall into. When you’ve had a good run, you might think that you are on a guaranteed path to success! When you are in the midst of a great accomplishment, you can start to let your guard down.

Companies act the same way – their market is booming, sales are going through the roof, and customers love them! Guess what – if you don’t continuously reinvent, you probably won’t last. Take a look at trend number 24 of my “25 Trends for 2025” – and in particular: “Apple is delisted.’ I’ve taken a lot of abuse for this prediction, and for now, I’m certainly wrong. But I put this together in 2014 to raise a point – no one is ever invincible! Here’s what I wrote:

Once one of the world’s most innovative, cash-rich, highly valued company, Apple enters a new phase in 2025 when it is delisted from most global stock markets. Why? Most industry leaders never survive; there is always someone with a better idea. It’s the age old world of business.

Invincible? You might think that you are on top of the world; that nothing bad can happen; that everything will be perfect; and then, it can all come crashing down in an instant. Often, with spectacular results.

Organizations and the people within them can easily develop an attitude of invincibility when things are great. Success after success develops a culture of complacency, and inevitably, failure results when least expected. Often, this culture develops at the top and permeates throughout the organization. An attitude of invincibility at the leadership level is often the biggest challenge that an organization can face because it’s easy for someone at the top to think that everything is guaranteed. That nothing will topple them. That all the support which has carried them forward so far will continue on, untouched. Until it does.

From a personal perspective, feelings of being invincible are dangerous and can wreak havoc on your overall goals and mindset. Watch for it, be wary of it, and always be on your guard. Nothing is ever guaranteed. As soon as you see dangerous levels of invincibility at hand, you know that the laws of unforeseen consequences can start to bear fruit!

And then, before you know it – wham! Back down you go!

You are never invincible: your potential next failure is always just around the corner, lurking, waiting, hiding in the shadows, ready to pounce on you when you think you are the strongest.