For some reason, I’ve been chronicling my day in a series of short video clips from the home broadcast studio since this thing began…..

Part of this has been due to my effort to master the technology – I can go live at any time and support any number of different types of online events. Butut it’s also been part of my method of staying sane while in isolation : I’ll get a thought while raking, run down to the home studio, film a clip, and then head back out!

I put them out into the ether, hoping they inspire some people. And so when you get a message like this, it makes a huge difference to your day. Small victories!

In response to this message, I filmed this clip yesterday! When your personal Groundhog Day is broken up by a small victory, it makes your day!

“We are all Phil Connors!” – Futurist Jim Carroll 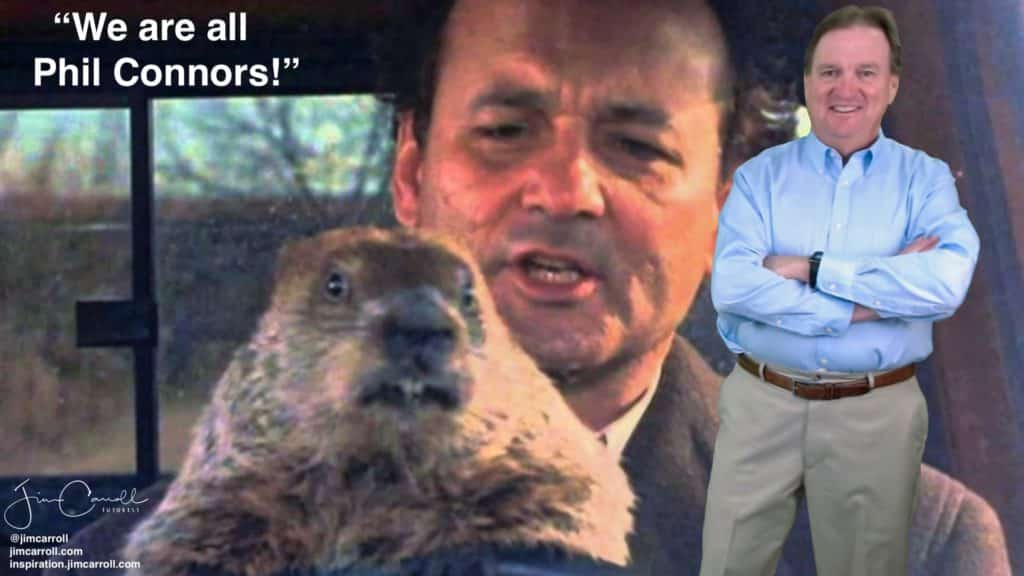 It is estimated that 1.5 billion people on our small orb are in lockdown or under stay-at-home orders; others, respectful of the lives of their fellow citizens, choose to heed the advice and respect the science.

Every day bleeds into the next, all the same, broken up only by the endless walks. It is said that some dogs, thoroughly delighted with the early newfound attention at home, are now hiding from their masters – they do not believe in the 20,000 steps religion.

Every day is like the rest – seeking equilibrium, some sort of balance, small activities to get through, and then a peek at the latest news, immediately followed by a racing heartbeat.

Every day is the same, broken up by a meltdown by a child and then a parent losing their shit. Family dynamics are being tested in new and different ways.

The days become like another, with some people actually pausing for a moment to ask ‘what day is it?’

Every day becomes the same, an endless war on the lawn, cleaning the garage, sorting through life’s possessions, attacking work responsibilities in small unfocused moments.

Every day is similar – until we decide ‘enough is enough,’ and actively seek strategies to break it up into something new.

And so tomorrow, on the 6th day, we will vacuum!

“It’s better to be ready for an uncertain future than to be caught standing still!” – Futurist Jim Carroll 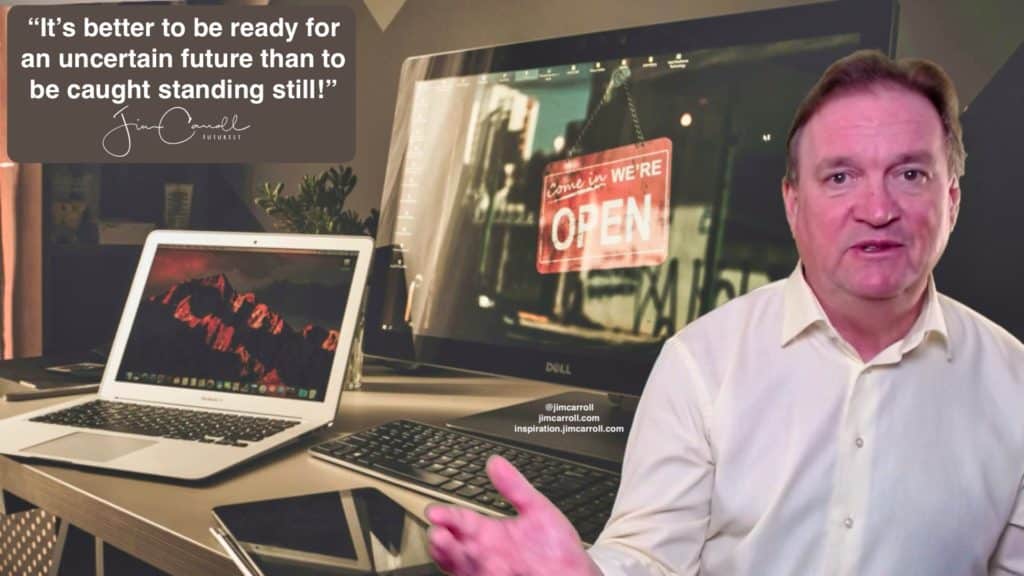 It’s pretty certain that there won’t be a lot of demand for a futurist for a time – people simply want to get through today!And the idea of gaining insight to build an innovative team is almost laughable at this very moment, when companies are having to struggle to stay alive.

It’s pretty clear to me that, like everyone else, face an unknown and fuzzy future. I realized early on that I would most likely have an extended period of downtime, and that fact itself takes a lot of emotional management.

But what do you do when you are facing increasing irrelevance?

Try to reinvent your relevance!

That’s why I’ve spent so much time putting together short video clips since this thing began – 2 or 3 per day! It’s part of a process in which I’m doing what I know best – sharing my insight and perspective – even if I know that there are not a lot of people seeking that insight right now.

And every message of thanks and support that I get from someone who sees these posts arrives like a burning arrow of joy.

More important, the process has helped me to build up the sophistication of my online broadcast studio offerings. My overseas producer Armine Simoyan and I have spent the last few weeks working on a summary video that outline what I can do from the stdio, and it’s a pretty impressive list.

Give it a watch at https://online.jimcarroll.com

The fact is, when the world is ready and companies are starting to move on to the next phase – recovery and rebuilding – I’ll be ready with online talks, pre-taped professionally produced video leadership series and more.

But I do know that I won’t sit around and let an increasing, and hopefully, temporary irrelevance become a relevant fact in my future!

I’ve kept myself busy through the month ramping up the sophistication of my home office broadcast studio. Here’s an overview of what my team can do!

There are several elements in my kitbag:

But I’m not delusional – I know it is going to be a long time before ANY organization is ready to once explore the future, leadership, transformation and innovation. Right now, it’s truly a game of survival for most.

But what I learned through the 2001 and 2008 downturn’s was that it was those who focused on innovating their way out of this thing, were the ones who were best positioned on the other side.

So I’m ready, when you are.

Back in 2017, I wrote a blog post: “The Emerging Healthcare Reality Crisis.”

Here’s what I said:

It’s actually sad and tragic that I actually predicted events underway in a certain country, and that it is far more real than I ever imagined. I am so happy that I am based in Canada.