Home   >   Blog   >   Daily Inspiration: “At one moment in time, the unimaginable future you once predicted will suddenly become real!”

Daily Inspiration: “At one moment in time, the unimaginable future you once predicted will suddenly become real!”

“At one moment in time, the unimaginable future you once predicted will suddenly become real!” – Futurist Jim Carroll 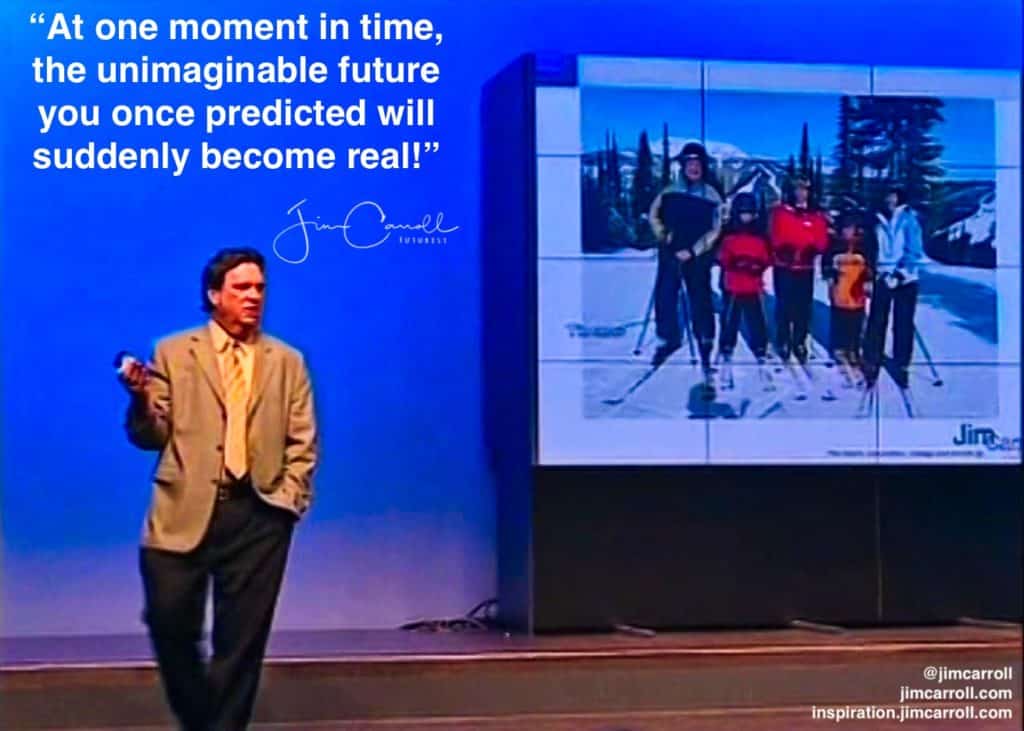 I had to dig into the vaults to find this picture – and it’s of poor quality! But what a story!

It’s from February 2006 – I’m on stage in Zurich, Switzerland, opening the World Innovation Summit – and I’m telling a story that one day, I’ll strap on a pair of smart skis – they’ll be linked to the Internet somehow, and will gather information on my performance. Edging, carving, turn radius and more….

Fast forward – that future suddenly arrived this weekend when I had a chance to wear the new Atomic connected ski boot, and I’m going to have a long blog post later this morning putting into perspective the magic of this trend!

The photo within the photo? I’m explaining how I only took up skiing a few years earlier, starting late in life at the age of 40. My two young son are with my wife and I – as is Canadian Olympic champion Nancy Greene. We had a chance to ski with her for the day out at Sun Peaks in B.C.

A few weeks later and just a few hours after leaving the stage with this photo, I was skiing the Swiss Alps!

Smart skis? I actually began talking about the idea of connected sports equipment way back in the late 1990’s, using the phrase ‘hyper-connectivity,’ explaining that all the devices which are a part of our daily life will become connected.

From a sports perspective, I outlined that this would provide opportunities for analysis of performance as well as all kinds of other unique metrics. Watch for the post – it’s going to be fun!

What’s the lesson from all of this? All of us wonder where the future might take us. Sometimes, we think that our imagination can get ahead of us, and believe that the vision we see might be too far reaching, too dramatic, too crazy.

And then one day, the future catches up with us, and we are living in a future that once only just imagined as a possibility.