Daily Inspiration: “When the speed of change is relentless, choose to be your faster self!”

“When the speed of change is relentless, choose to be your faster self!” – Futurist Jim Carroll 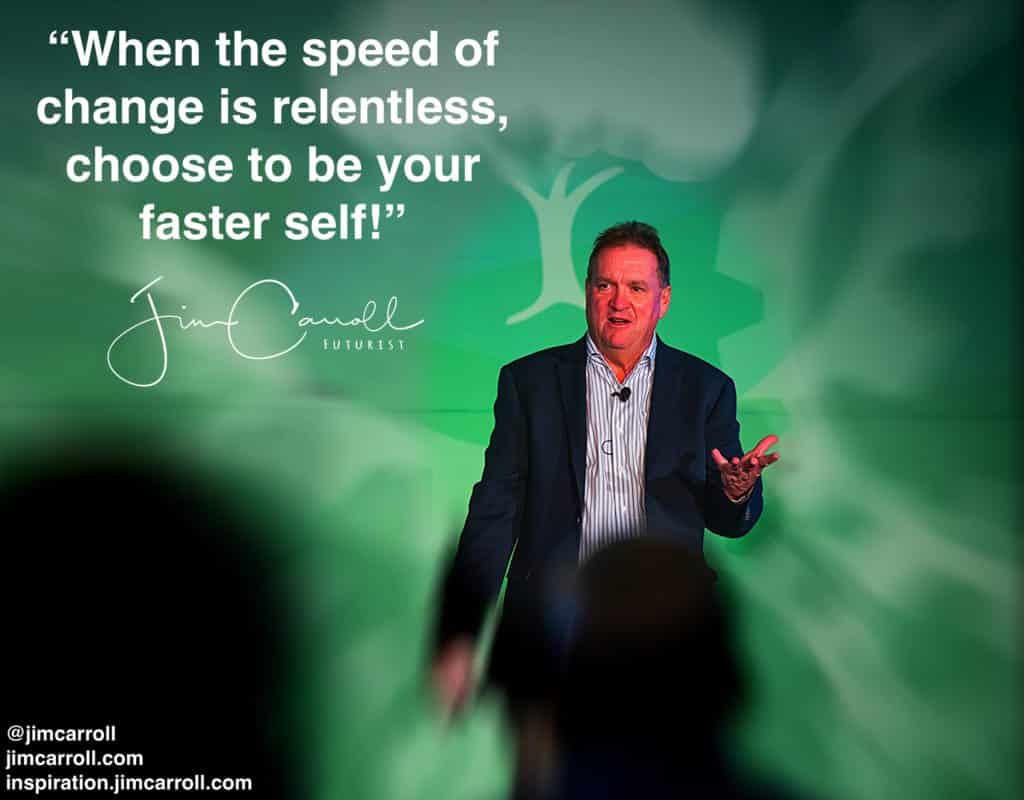 And don’t ever, ever slow it down.

That’s really the only way to survive these turbulent times

Take a look around you and think about some of the changes you’ve seen in just the last few years.

Cyber-Monday sales wildly eclipsed those of Black Friday – a shopping day that was once all the rage – just a few years ago! Retail is dying, online is everything, logistics hubs and last mile delivery are the new battleground.

The internal combustion engine is dying. A few years ago, most car companies were dismissing electric vehicles. Today, with a few exceptions, most of have have admitted the trend is at the core of their future strategy for survival. Cars are becoming computers and connectivity is the new horsepower.

Oil and carbon are sunset industries – even the Saudis known that. Just a little while ago, renewable energy grids based on giant battery storage farms were a quixotic novelty – today, they are at the heart of many energy utility investments.

Apple used to be the most innovative company on the planet, reinventing entire industries. Today, the best they can do is roll out a few new emojis, move some menu items around, and screw up every software release. They’re quickly going from hero to zero. They no reinvent things – they mess up what they’ve got.

Boeing used to be a widely admired company. Today, people are scared of some of their airplanes because people die when flying them. Brand destruction and devaluation occurs at a blinding speed in the era of instantaneity!

All these changes in but a few short years. What’s coming tomorrow? I’m not sure, but I do know it will be here faster than we think!

Get with the program – accelerate yourself!