Daily Inspiration: “The future is inevitable. Your decisions and actions are not!”

“The future is inevitable. Your decisions and actions are not!” – #Futurist Jim Carroll 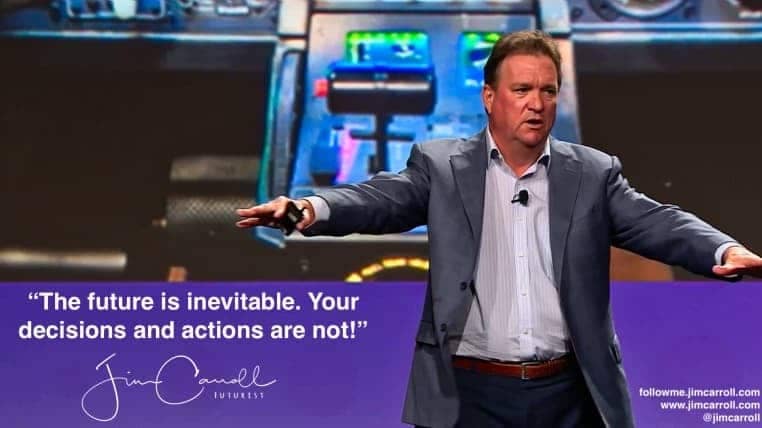 You always have the opportunity to make a change. Do you grab it when it’s there? Maybe not. Do you think about why you don’t?

The resulting outcome is often completely avoidable.
Yet many people feel trapped in their current reality, and don’t know how to escape. This sets in a feeling of feeling helpless, and a state of being inactive, unable to move forward.
And yet while this settles in, the future happens all around them, often at an ever increasing pace. The result? They fall behind, fail, and end up in a worse state than before.

How do you get out of this type of mindset? By recognizing it for what it is, and making a *conscious* decision to innovate, change and adapt. Denial is not an option – excuses are but a tonic for failure!

Here’s the thing: inertia is easy – action is hard.

When confronted by change, many people react by …. doing nothing. When things are uncomfortable, the easiest thing to do to deal with that discomfort is to avoid it.

Yet such thinking causes many organizations and the people within them to fall asleep. They keep doing what they’ve been doing before, hoping that will carry them forward into future. Obviously that can’t work, for a whole variety of different reasons. First of all, things are going to change whether you like it or not, and its going to happen faster than it has in the past!

The need for a decision is critical too, but too many people avoid that necessary step! Granted, it’s easy to avoid tough decisions : it seems to be a natural human tendency. Yet to deal with challenging issues requires tough decisions, but in many cases, it’s easier to put those decisions off into the future rather than having to deal with them.

But if you can’t make a decision, and as a result, can’t act, the outcome is obvious: continued failure, degradation and destruction.

So today, on this Monday – make a decision. Act on it. Do it now!