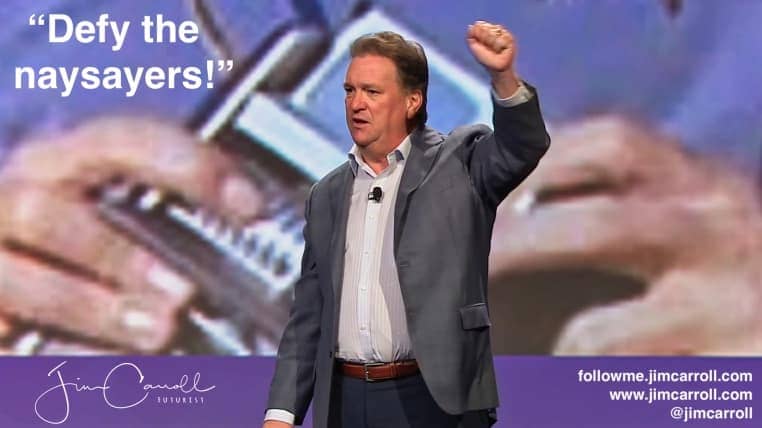 You will live your life surrounded by people who will tell you it can’t be done. That it won’t work. It’s a dumb idea. It’s doomed to fail. You should be doing something better with your time.

Ignore them. Pursue your belief, and live your life.

We are all surrounded by those who want to kill our innovative ideas, crush our dreams, or hold us back from pursuing our potential. They live a life of negativity, viewing everything through a lens of impossible challenges, while you see the world through a filter of opportunity.

37 years ago, I signed into the online world for the very first time. I had a career path and trajectory in the world of finance, but I was intrigued, overwhelmed, and stunned by the potential world that might be found at the end of a 300-baud online connection. (Hint: look up 300-baud). I found myself becoming immersed in the world of technology and the opportunities of technology. I explored the boundaries of possibility and helped to launch some initiatives that were way ahead of their time I came up with a business-networking idea that I called LinkAge, 20 years before LinkedIn appears on the scene.

I was told I was throwing away a ‘perfectly good career’ in finance, and that I should be more cautious with my reckless ambitions.

I don’t think I listened to them. I kept on my path of discovery and my voyage of curiosity.

When the Internet finally exploded into public consciousness around 1993, I had already been ‘online’ for 11 years. During the next seven years, a friend and I wrote 34 books about the Internet and sold over 1 million copies. I found myself in the news on a regular basis, hosted my own radio shows, and carved out a career on the global stage.

Don’t listen to the naysayers. Don’t think it can’t be done. Don’t hold yourself back. Don’t limit your dreams. Don’t be negative. Don’t be small. Don’t be boxed in.